For many applications, materials can be made a great deal more efficient by giving them a specific nanoscale structure. Materials that organise themselves to create the desired structures, without the need for complex procedures, are particularly interesting. A research team from the University of Hamburg, DESY, the European Synchrotron Radiation Facility ESRF and the Ludwig Maximilian University of Munich has now turned its attention to this self-organisation. Using a range of different X-ray techniques, the scientists observed the formation of tiny cobalt oxide crystals, just a few nanometres across, and watched as these joined up to produce uniform assemblies even while the crystals were being formed. The team has reported its results in the journal Nature Communications.

Nanomaterials have some special properties which make them more effective than conventional materials for many applications. For example, nanoparticles act as efficient catalysts even if the materials they are made of have low catalytic activities. One great source of their potential lies in the wide variety of shapes and material combinations that are conceivable on the nanoscale. However, assembling these nanostructures into specific configurations can be a tedious process. This is why the scientists are focusing particularly on nanocrystals that form complex structures on their own, without any outside influence, for example by self-assembling. This increases their effectiveness in important technological applications such as green energy production or sensor technology. 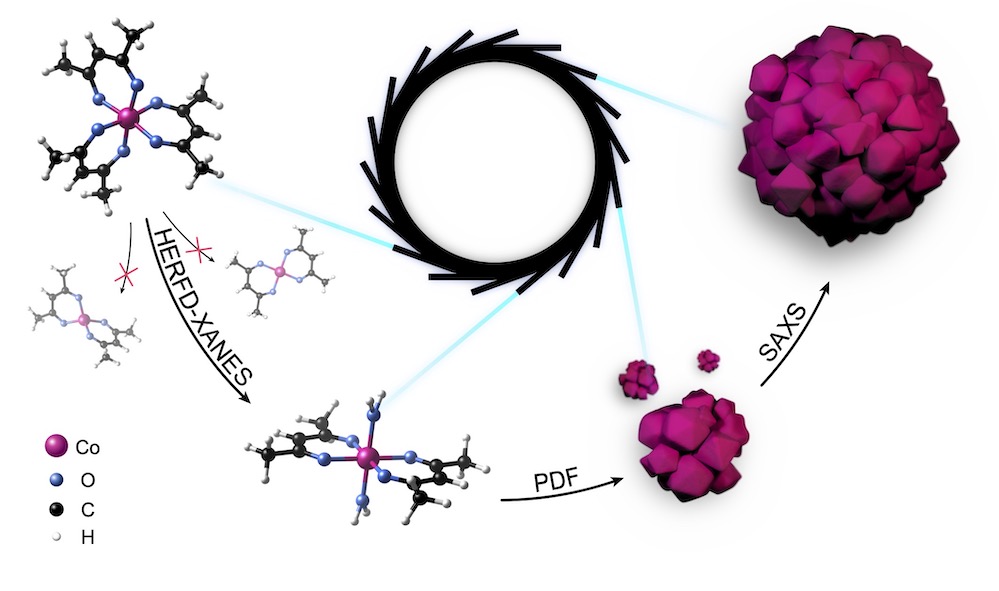 X-rays from a synchrotron radiation source (centre) are both attenuated (absorbed) and deflected (scattered) by matter. Depending on which of these interactions a specific X-ray technique measures, scientists can draw conclusions about different stages of a nanomaterial’s formation process. By combining both X-ray absorption and X-ray scattering, all the different steps can be unravelled, from the starting material (left) to the final assembled nanostructures (right).

“Nanoparticles can frequently be observed to arrange themselves independently, as if following some blueprint, and to adopt new shapes,” explains Lukas Grote from DESY and the University of Hamburg, one of the lead authors of the study, which was also supported by the Cluster of Excellence “CUI: Advanced Imaging of Matter”. “However, we now want to understand why they do this and what steps they go through on the way to their final configuration. To do this, we are monitoring the formation of nanomaterials in real time, using high-intensity X-rays.” These experiments were carried out at DESY’s PETRA III X-ray source and at the ESRF.

“However, the formation of nanomaterials is usually a complex process,” as Dorota Koziej, professor at the Center for Hybrid Nanostructures (CHyN) at the University of Hamburg, points out. “That is why no single X-ray method is able to investigate all the different steps in the formation process. For each step, you have to apply the right technique, and later you put together the individual results to produce an overall picture.”

When X-rays travel through matter, they are both attenuated (absorbed) and deflected (scattered). Both these processes can be observed separately, and conclusions can be drawn from them about different stages in the growth process of a nanomaterial. X-ray absorption spectroscopy looks at the different degrees to which X-rays are absorbed, depending on their wavelength, and can detect chemical changes in molecules. This technique therefore reveals the individual steps by which the starting materials for the nanostructures are transformed, even before nanocrystals have formed.

From the moment that the smallest nanocrystals form and start to grow, the way in which X-rays are scattered by the material changes. “The superposition, or interference, of light waves causes more light to be deflected in certain directions than in others. We can then use this X-ray scattering to calculate how the shape and size of the cobalt oxide nanocrystals evolve,” explains Cecilia Zito, one of the lead authors from the University of Hamburg, who is now working at Sao Paulo State University in Brazil. “It also allows us to observe how the nanocrystals attach to each other, that is, assemble independently to form new and more complex structures,” adds Kilian Frank from the Ludwig Maximilian University of Munich, also a lead author of the study.

“Despite this, figuring out the blueprint of nanomaterials remains a huge challenge. Every compound is different and we have yet to understand many of the pathways in the self-assembly process,” says Grote. The scientists involved are convinced, however, that this will soon change. “In the end, we are looking for an overall model that can be used to explain and predict in a very general way how complex nanostructures come about,” says Koziej. “That way we will learn how best to manipulate the dynamic processes at the nanoscale, and ultimately to exploit the full potential of these custom-made nanomaterials.”