As the sixth country in nanoscience publications, South Korea possesses 123,189 WoS indexed nano-articles. Having registered 11,006 nanotechnology patents in both USPTO and EPO, it ranked 3rd in the USPTO and 5th in EPO. According to the StatNano database, 383 nano-products from 82 companies are produced and marketed in this country.

South Korea's first national nanotechnology development program was initiated in 2002 and has since been restructured and renewed year after year. For instance, in 2018 alone, South Korea invested nearly 600 million in this area. In the last 20 years, more than 123,000 nanotechnology articles have been indexed in WoS by Korean researchers, and in this respect, South Korea has always been among the top 10 countries in the world, currently holding the sixth ranking across the globe. This is while in terms of the total number of scientific articles in the last few years, they have not been ranked better than the twelfth.

In the field of innovation and patents pertaining to nanotechnology, South Korea would be in the third place, with more than 9,300 nano patents registered in the USPTO. Meanwhile, in Europe it has always been among the top 5 countries, having about 1,700 nano patents.

South Korea has also been successful in virtualizing nanotechnology, and Korean companies have multitudinous products in global markets. Of course, the exact number of Korean nano companies and products is not known, but according to StatNano’s Nanotechnology Products Database (NPD), 383 types of nano products are presently available from 82 Korean manufacturers. In addition, South Korea is one of the influential countries in the ISO / TC 229 Technical Committee of the World Standards Organization and has so far published 29 national standards in the field of nanotechnology, indicating the comprehensive attention dedicated to the development of nanotechnology in this developed country. 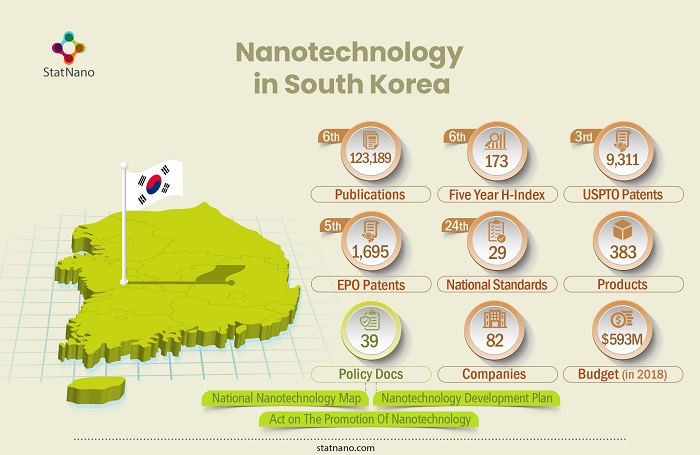