A team of researchers from the ITMO University’s School of Physics and Engineering, the Nonlinear Physics Center at the Australian National University (ANU), and Korea University has developed a compact nanolaser based on a photonic crystal waveguide with super-high efficiency. The device is a photonic structure and is notable for its small size compared to its counterparts. An article about this device was in Nature Communications.

ITMO.NEWS talked with Kirill Koshelev, one of the key authors of the project and a researcher at the School of Physics and Engineering, about the way this device works and its relevance for fundamental science.

For several years now,  a research team under the supervision of Yuri Kivshar, research supervisor at ITMO’s School of Physics and Engineering and professor at the Australian National University, has been conducting research in the field of nanolasers. Last year, the results of their research were published in ACS Nano and several others.

The recent publication in Nature Communications concerns a “spin-off” of this research. Using the results of a study of special wave types – bound states in the continuum – and nanoresonators, the scientists managed to produce a functioning prototype of an ultra-efficient nanolaser.

The laser consists of several elements: the so-called active media, where the radiation is generated, and a resonator – a space for the produced radiation to be stored in for a long time.

The article describes improvements made to resonators in order to allow photons to remain within the resonators for extended periods of time. When laser radiation is generated, photons – quants of light – appear and proceed to induce the appearance of other photons in a cascading manner. The longer the initial quants exist and the longer they remain inside the resonator, the more new photons they can create.

The resonator developed by the researchers allows them to produce laser radiation using a small number of photons.

“There’s a characteristic of a laser called the lasing threshold. It stands for the value of the pump power at which laser radiation is produced. The lower it is, the better. We need very little power to turn on the laser. We compared our metrics with previous research and found our threshold to be smaller by several magnitudes,” comments Kirill Koshelev.

In order to generate radiation in nanolasers, a special type of light waves is used – bound states in the continuum. They have a much more complex spatial-temporal distribution than simple, plane light waves, which are produced by light sources and are clearly visible.

Bound states in the continuum can be implemented in photonic structures with a special periodic structure. In particular, modulation of the photonic environment is necessary for them to appear. For example, a periodic set of holes in the structure of a special size and set periodicity.

“We take InGaAsP – indium gallium arsenide phosphide – and place holes in the material in a specific order. Thanks to the specific placement of these holes, we can induce special qualities of light waves inside this dielectric structure. A light wave can stay there for quite a long time, which allows us to produce efficient laser radiation. At the same time, even if the structure differs from our calculations or the diameter of the holes or the distance between them varies, the needed state will nevertheless appear but at a slightly different frequency,” explains Kirill Koshelev. 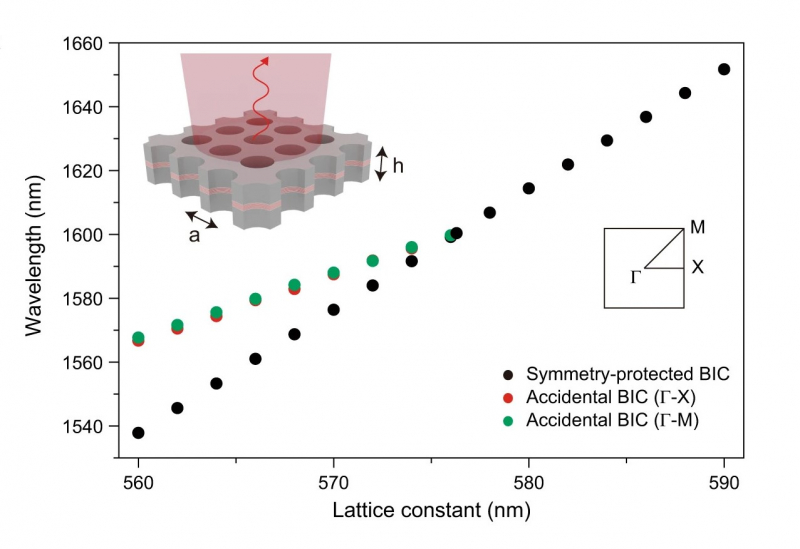 Merging of BICs in the infinite-size structure.

The change in periodicity

The next step is not only to use the properties of bound states in the continuum but also to enhance them, which means placing these specific light waves on each other to reach the superstate. For that, light waves must be synchronized: they need to have the same group and phase velocity, the same angle of incidence, characteristics, and behavior.

This can be achieved through another geometric modification of the dielectric structure – the change of its periodicity.

“We change the periodicity of this structure – roughly speaking, the pattern of holes. The holes remain the same but we create a set of structures, in every sample of which the space between the holes gradually increases by nanometer. That’s how we make these states of light synchronize and they become the same. That’s why they can overlap and enhance each other, resulting in a superstate that can hold the light inside for a longer time,” says Kirill Koshelev. 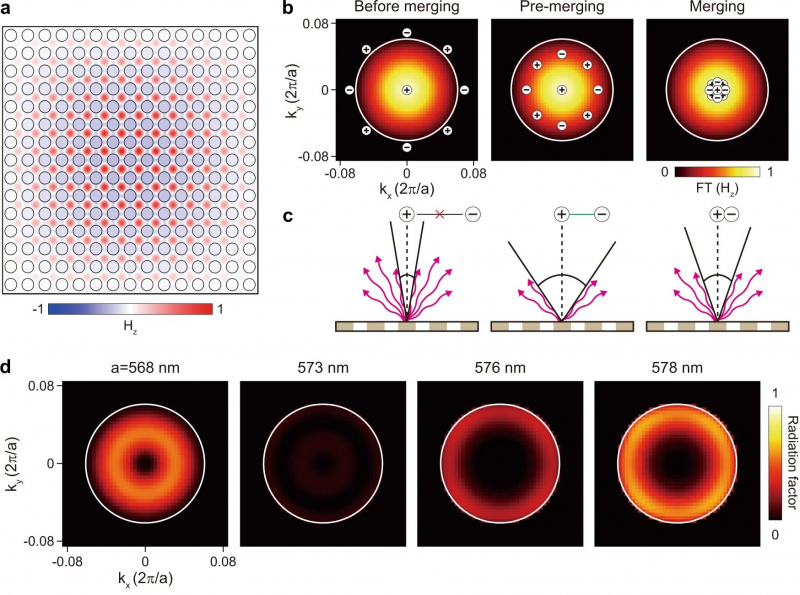 Merging of BICs in the finite-size structure.

Today, the field of ultra-small lasers is being developed very actively. This technology might lead us to the new generation of optical chips, components for optical computing systems, sensors, and other devices that use light for data transmission and processing. This is why the achievement of the team of researchers from ITMO, ANU and Korea University is a breakthrough in optical technologies and also an important fundamental solution.

When it comes to the scientific aspect of this work, the researchers consider it to be completed. However, the prototype is still under development.

“Not all properties of these lasers are optimized, actually. For example, some energy we’re using to launch the laser is still wasted. The laser’s properties can be improved to avoid that. But fundamentally, this topic is fully researched, only engineering tasks are to be solved,” says Kirill Koshelev.