Hokkaido University scientists and colleagues in Japan have found a way that could help some patients overcome resistance to an immunotherapy treatment for cancer. The approach, proven in mice experiments, was reported in the Journal for Immunotherapy of Cancer.

The activation of checkpoint proteins on the surfaces of immune cells help regulate the immune response by preventing them from indiscriminately attacking the body’s other cells. But some cancer cells are able to hijack this mechanism, preventing an immune response against them as well. Scientists have recently developed immune checkpoint inhibitors that can counteract this strategy, but some people are resistant to the treatments. 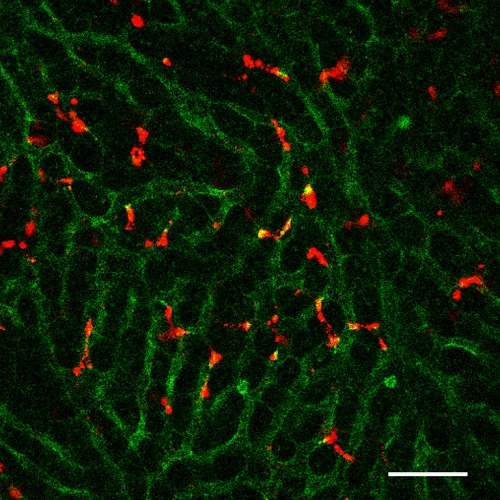 After intravenous injection into mice, STING-lipid nanoparticles (red) transported through blood vessels(green) accumulate in the liver.

Now, scientists at Hokkaido University and Aichi Institute of Technology have found a way around this by developing a specially designed lipid nanoparticle that can carry immunity-triggering molecules into immune cells in the liver called macrophages.

The lipid, called YSK12-C4, has a high affinity for immune cells. When intravenously injected into mice with metastatic melanoma, it was able to deliver signaling molecules, called cyclic dinucleotides, across the cell membranes of their liver macrophages, where they stimulated the production of immune-related proteins called type 1 interferons via a stimulator of an interferon gene (STING) pathway. These were released into the blood, activating another type of immune cell called natural killer cells in the spleen and lung, which produced interferon-gamma inside the lung metastases.

This treatment, on its own, only elicited a mild anti-tumor effect. This is because the type 1 interferons and interferon-gamma triggered the expression of a protein called PD-L1 on the cancer cells. PD-L1 prevents a strong tumor-killing immune response of natural killer cells that express PD-1. Administering an anti-PD-1 immunotherapy treatment, however, prevented the cancer cells from turning off those natural killer cells, which then became armed and able to launch a full-scale attack.

Combination therapy against anti-PD-1-resistant lung cancer. A combination of anti-PD-1 antibodies and stimulator of an interferon gene (STING)-loaded lipid nanoparticles (STING-LNP) had the maximum effect in reducing metastases (black regions) on lungs (pink tissue; far right). STING-lipid nanoparticles alone had a better effect (center right) than anti-PD-1 antibodies (center left), which were as effective as the control saline solution.

“The findings suggest that our lipid nanoparticles carrying immune-signaling molecules convert the immune status from immunologically cold to immunologically hot,” says Takashi Nakamura of Hokkaido University’s faculty of pharmaceutical sciences. “This could lead to the development of a promising adjuvant that reduces resistance to anti-PD-1 antibody treatment in some cancer patients.” 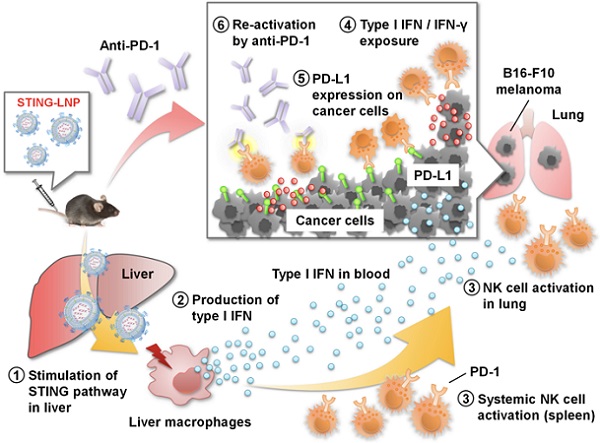 Summary for reducing anti-PD-1 resistance by STING-LNP. The STING-LNPs were intravenously injected into mice, delivering immune-signaling molecules to the liver. This stimulated the production of IFN-1 by liver macrophages, which in turn activated the NK cells in the lung and spleen. The effect of NK cells is limited by PD-L1; when STING-LNPs are combined with Anti-PD-1 therapy, the NK cells are able to act fully and destroy cancer cells. IFN, interferon; NK, natural killer; PD-1, programmed cell death 1; STING-LNP, lipid nanoparticle containing a stimulator of an interferon gene.

Further studies will need to examine whether the treatment can cause liver toxicity and if different signaling molecules can be used.