Researchers at Texas A&M University have described mechanisms that enable bacteria to adapt to varying viscosities.

In their roughly 3.5 billion years on Earth, bacteria have fine-tuned the art of colonizing all kinds of habitats, from the inner lining of digestive tracts to the blistering hot waters of geysers. But in their quest for world domination, bacteria face a critical snag when moving across diverse environments — preserving their navigational apparatus.

In a new study, published in the journal Nature Communications, researchers at Texas A&M University have found that the appendages controlling bacterial navigation, called the flagella, adjust to changes in the viscosity of fluids very precisely. This adaptation enables the bacterium to continue using its flagella for searching for nutrients, sensing surfaces and establishing colonies in different habitats.

“There is a significant interest in the biomedical fields to understand how individual bacterial cells transition from a lonesome existence to a community lifestyle,” said Dr. Pushkar Lele, associate professor in the Artie McFerrin Department of Chemical Engineering. “To answer this question, we are investigating the role of the flagellum as a response hub when a bacterium encounters different types of environments.”

To navigate toward nutrients, bacteria employ chemotaxis, a process by which they sense chemicals and swim in the direction of increasing or decreasing concentrations. The role of the flagellum in navigation is known — it reversibly switches between clockwise and counterclockwise directions of rotation to facilitate chemotaxis. Flagellar rotation is powered by internal stator units, similar in concept to the stator that rotates the rotor within an electric motor of a ceiling fan.

But more recent evidence suggests that the flagellum also plays a role in sensing changes in the cell’s mechanical environment — a process called mechanosensing. So, if the bacterium encounters an increase in resistance to the rotation of its flagella, it would be sensed as an increase in the viscosity of the environment.

In response, the flagellar motor recruit extra stator units to compensate by developing more power. However, research has also shown that such an increase in the resistance prevents the flagellum from switching directions of rotation, potentially rendering the chemotaxis machinery defunct.

“This observation posed a conundrum,” said Lele. “Chemotaxis is unlikely to be restricted to one type of viscous environment. So, we wondered if there were any adaptations happening within the flagellar motor that restored directional switching, and by extension, chemotaxis in varying viscous environments.”

For their experiments, the researchers chose a strain of E. coli with a fluorescently-labeled chemotaxis protein, CheY-P, that binds to the flagellar motor to initiate flagellar switching. The researchers applied resistance to the motor and then observed the level of fluorescence using high-powered microscopes. They found that the fluorescence dropped below baseline when they removed the stator proteins using genetic techniques.

In comparison, the fluorescence level remained at the baseline when the stators continually delivered torque to rotate the motor. This suggested that the presence of the stator units promoted CheY-P binding to the motor.
Based on these observations, the team theorized that in high viscosity environments, the increase in mechanical torque provided by the extra stator units increases the binding of CheY-P to the motor, thereby maintaining homeostasis in the switching function of the flagellum. 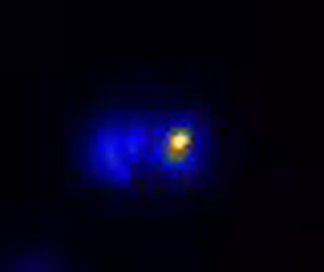 Lele pointed out this phenomenon of fine-tuning the internal state to adapt to changing mechanical loads bears a crude resemblance to proprioceptive adaptation, whereby organisms with a nervous system continuously intuit their position and velocity to make adaptive changes to achieve homeostasis or a stable physiological state . For example, insects’ muscular skeletal systems internally adapt and adjust to varying loads on their limbs to maintain their posture and grip when walking on the floor or the ceiling.

“Homeostasis in flagellar switching appears to help motile bacteria form swarms and colonize different environments,” said Lele. “Explaining the basis for the observed link between mechanosensing and chemotaxis will be important in preventing bacterial colonization, infections and antibiotic resistance in the future.”