Researchers fabricated a series of Gd-doped iron oxide nanoclusters to systemically study the inherent mechanism through which Gd doping tune the T2 contrast ability of the nanoclusters.

To realize precise diagnosis of early-stage cancer for effective treatment and better prognosis, high-resolution magnetic resonance imaging (MRI) is indispensable with the help of contrast agents. Iron-oxide-based T2 MR contrast agent (IOCA) is facing severe question of strong ferromagnetism and thereby weak T2 contrast ability. Although numerous efforts have been devoted to enhance the contrast ability of IOCAs, such as gadolinium ions (Gd3+) doping, the specific role that Gd3+ played in this process remained unclear.

Researchers led by Prof. WU Zhengyan from the Hefei Institutes of Physical Science (HFIPS) of the Chinese Academy of Sciences (CAS), the Institute of Health and Medical Technology and the Binzhou Medical University fabricated a series of Gd-doped iron oxide nanoclusters to systemically study the inherent mechanism through which Gd doping tune the T2 contrast ability of the nanoclusters.

The researchers found that, with the doping content increased, GdxFe3-xO4 nanocluster featuring ferromagnetism turned into a superparamagnetic one, and the specific surface area of the nanocluster significantly increased, collectively leading to stronger T2 contrast. 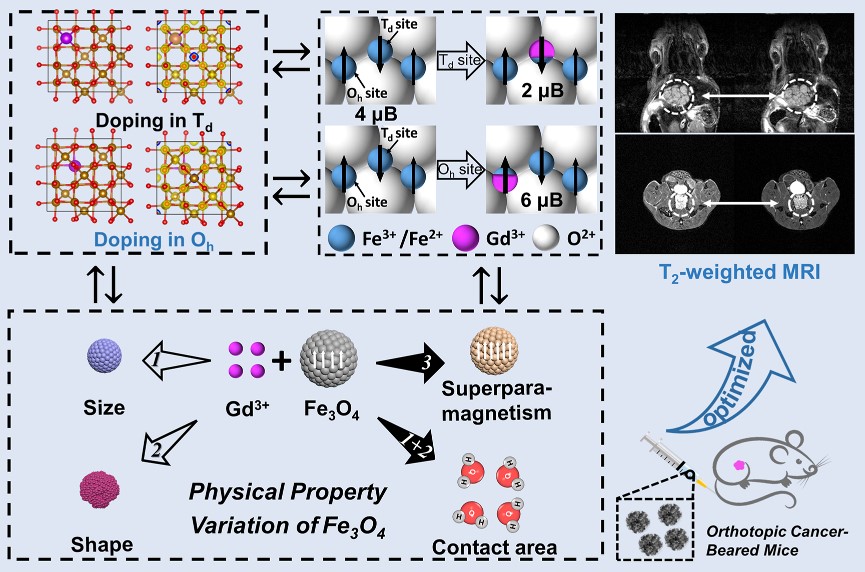 This work opens a new avenue for the development of atomically precise Gd-doped MMIONs as efficient T2-weighted MRI contrast agents.