The NHS has very recently approved a new cholesterol-lowering jab which will be offered to 300,000 people over the next three years.

The drug – inclisiran – will be administered twice a year as an injection. It will mainly be prescribed to patients who suffer with a genetic condition that leads to high cholesterol, those who have already suffered a heart attack or stroke, or those who haven’t responded well to other cholesterol-lowering drugs, such as statins.

There has been plenty of excitement surrounding the approval of the drug, both because of what it may be able to achieve, and because the drug uses a technique known as “gene silencing”. This is an emerging therapeutic technique that works by targeting the underlying causes of a disease, rather than the symptoms it causes. It does this by targeting a particular gene, and preventing it from making the protein that it produces.

Gene silencing drugs work by targeting a specific type of RNA (ribonucleic acid) in the body, called “messenger” RNA. RNAs are found in every cell of the body, and play an important role in the flow of genetic information. But messenger RNA (mRNA) is one of the most important types of RNA our body has, as it copies and carries genetic instructions from our DNA and makes specific proteins depending on the instructions.

In the case of the cholesterol jab, gene silencing works by targeting a protein called PCSK9 and degrading it. This protein is involved in regulating cholesterol in our bodies, but occurs in excess in people with high levels of LDL cholesterol (the “bad” cholesterol). Preventing this protein from being produced in the first place will reduce cholesterol levels.

In order to target this specific mRNA, researchers need to create a synthetic version of another type of RNA – called small interfering RNA (siRNA) – in the lab. This is a highly specific stretch of RNA which can be used to target specific mRNAs. In this case, the siRNA is designed to specifically target the mRNA which carries instructions for the PCSK9 protein. It binds to its target mRNA and destroys the instructions, which significantly reduces the amount of these proteins that are produced. 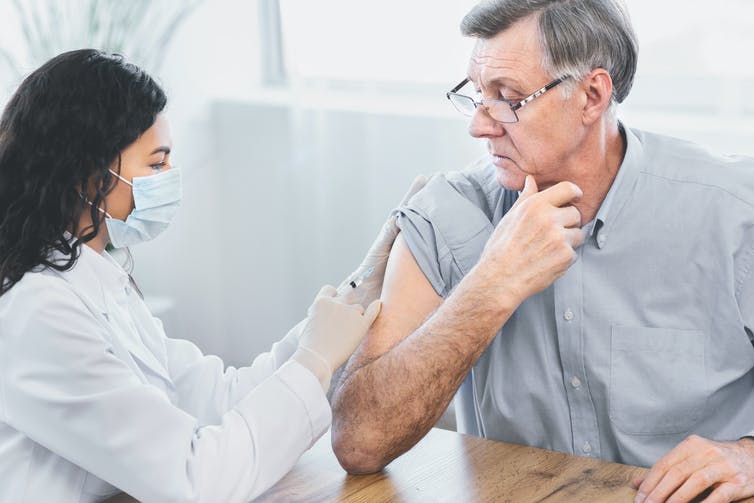 Gene therapies are usually delivered using a viral vector – a virus-like vehicle that delivers genes to our cells in the same way a virus might infect them. So far, viral vector therapies have been used to treat rare genetic blood disorders, genetic blindness and spinal muscular atrophy.

Although viral vectors are very effective with one treatment, it may be impossible to deliver a second dose if needed due to adverse immune reactions. These drugs are also extremely costly.

Because of this, many of the gene silencing drugs currently being investigated are delivered using a different technique. Known as non-viral vector gene therapies, these deliver the drug using a nanoparticle which protects it from degradation in the blood so it can be delivered specifically to the target – such as the liver, which is the target of the cholesterol jab.

Gene silencing therapies delivered by non-viral vectors seem to hold more promise as they can be administered several times with limited side effects. Currently, non-viral vector therapies are used to treat a rare genetic condition called hereditary transthyretin-mediated amyloidosis, as well as in mRNA vaccines, such as BionTech/Pfizer and Moderna.

Interestingly, though, the cholesterol jab is not buried inside a nanoparticle or delivered with a viral vector. Instead, the siRNA has been heavily modified in the lab to withstand degradation in the blood. It also has a ligand (a sugar molecule that works a bit like a hook) attached to it that allows it to specifically target liver cells.

Several more gene silencing drugs are currently being investigated to treat a variety of other disorders, including in the kidney (such as preventing adverse reactions after a transplant), the skin (scarring), cancer (including melanoma, prostate, pancreatic, brain and other tumours) and eye disorders (such as age-related macular degeneration and glaucoma). Researchers are also investigating whether gene silencing therapies could be useful in treating neurological and brain disorders, such as Huntington’s disease and Alzheimer’s disease.

Each of these gene silencing treatments would use similar techniques as other drugs that currently exist – by targeting a specific gene or protein and shutting it off. But in the case of cancer, because it’s very complex, multiple different proteins may need to be targeted.

These gene silencing technologies will need to be shown to be effective in further clinical trials before they can be rolled out for use on a wider scale. Another important challenge will be ensuring that the costs of these drugs remain low so many people can access them. But overall, these developments are very promising: gene silencing drugs are more specialised as they can target specific proteins in our cells. This may be why they can be more successful in treating diseases than current treatments.