Can Graphene Valleytrionics Pave the Way to Household Quantum Computers?

Scientists find a way to use pristine graphene to encode and process quantum information, reshape the future of quantum computing.

Quantum computers that often make the news—such as those at Google, IBM, or Microsoft—are large, complex, and expensive, and can only operate at ultra-low temperatures of nearly –200°C. This makes them very impractical for use on a large scale. Now, researchers from the Indian Institute of Technology (IIT) Bombay have found a way to use pristine graphene for encoding, processing, and storing quantum information, opening doors to much simpler, small-sized quantum computers that can operate at room temperature.

Quantum computers have recently become a hot-button topic because of their theoretical potential to outperform conventional computers by several orders of magnitude in terms of speed. Quantum Computing will enable the faster execution of molecular simulations, big data analysis, deep learning, and other computationally intensive tasks, in turn, accelerating molecular research and the development of new drugs, helping in the search for cures to complex diseases, including COVID-19, not to mention the ways in which it can create uncrackable cybersecurity measures and revolutionize artificial intelligence. 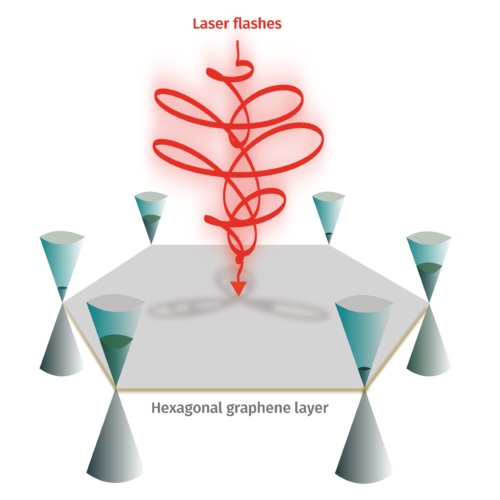 Short flashes of laser (shown in red) shine on a single layer of hexagonal graphene (shown by the hexagonal plane in grey). Due to the light-matter interaction, graphene exhibits different electronic populations at the alternate corners of the hexagon (indicated by the filled cones at the corners). These different populations, known as valley polarization, can be treated as 0 and 1: the basis of a qubit.

A quantum computer can achieve these feats because it encodes information in quantum bits rather than the binary “0” or “1” that regular electronics use. Quantum bits are superpositions of “0” and “1”, and can therefore take intermediate values, making computations much faster. Sadly, such quantum computation is not yet possible at room temperature; and existing computers, such as those owned by Google, IBM, and Microsoft, have to be kept at ultra-low temperatures below –196.1°C, which makes them costly and impractical to operate.

Fortunately, a very promising novel approach for encoding quantum information is actively being explored to overcome these challenges: valleytronics.

Aside from their charge, electrons have another parameter that can be manipulated: their “valley pseudospin,” which are the local minima in the energy bands of solids that can be occupied by electrons. By manipulating how many electrons occupies each of the valleys, quantum information can be encoded, processed, and stored at less restrictive temperatures.

A team of scientists from the Indian Institute of Technology (IIT) Bombay, and Max-Born Institut, Germany, have achieved a breakthrough in valleytronics that opens up the road to taking quantum computers all the way to room temperature operation. Their findings, published in Optica, describe a way to perform valley operations in single-layer (one atom thick) or pristine graphene (carbon atoms arranged in a hexagonal sheet structure), which was hitherto assumed to be impossible—atomically thin layers of graphene have electron valleys but, due to the material’s inherent symmetry, they were deemed useless for valley operations.

The team, led by Associate Professor Gopal Dixit from IIT Bombay, came up with a strategy to break graphene’s valley symmetry using light. Dr. Dixit explains: “By tailoring the polarization of two beams of light according to graphene’s triangular lattice, we found it possible to break the symmetry between two neighboring carbon atoms and exploit the electronic band structure in the regions close to the valleys, inducing valley polarization.”

In other words, this enables the use of graphene’s valleys to effectively “write” information.

Dr. Dixit also highlights that the flashes of light can cause electrons to wiggle several hundred trillion times a second. In theory, this means valleytronics at petahertz rates is possible, which exceeds modern computational speeds by a million times!

As the poster child of carbon nanomaterials, graphene possesses a plethora of beneficial properties. Pristine graphene has brought many breakthroughs even in conventional electronics. Being able to apply single-layer graphene to quantum computing could change the game.

One of the most attractive aspects of conducting valley operations in graphene is that it’s possible to do so at room temperature. “Our work could open the door to miniature, general-purpose quantum computers that can be used by regular people, much like laptops,” remarks Dr. Dixit.

Perhaps, soon, quantum computers will cease to be a thing of wonder residing in large labs and have a place in the everyday household.

Read the original article on CSIR-NISCAIR.