Diamonds are precious stones used for jewelleries and industrial purposes. But in the not-too-distant future, diamond nanoparticles, or nanodiamonds (NDs), may become the solution to everyone’s oral health.

Oral diseases such as dental caries (decay), gum diseases and fungal infections are major global health care problems, resulting in expenditures of millions of dollars every year and yet, have no established solutions. Complex microbial communities, typically occurring as disease-causing bacteria and fungi attaching to teeth surfaces and forming biofilm communities, are the main causes of infections. The National Institutes of Health states that 65-80% of all human infections are formed by biofilms. 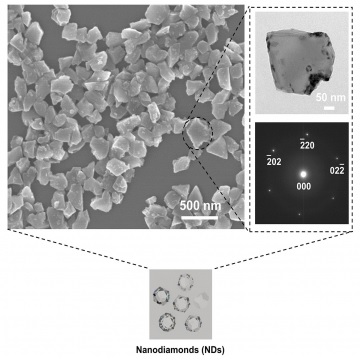 In a journal article published in Biomaterials Science titled “Biofilm inhibition in oral pathogens by nanodiamonds”, scientists from the Faculty of Engineering and the Faculty of Dentistry of the University of Hong Kong (HKU) revealed for the first time the inhibitory effect on oral pathogenic biofilms by high-pressure high-temperature (HPHT) NDs.

Co-Principal Investigators of the study Dr Chu Zhiqin, Assistant Professor of the Department of Electrical and Electronic Engineering; and Dr Prasanna Neelakantan, Clinical Assistant Professor in Endodontics revealed that NDs work as an effective agent against both free-floating cells (planktonic cells) and attached cells (biofilm) of bacteria and fungi that are highly relevant in oral and systemic infections. In particular, they uncovered the role of NDs in inhibiting biofilm formation and their disrupting effect on preformed biofilms in several selected orally and systemically important organisms.

Dental caries is one of the most common diseases to affect humankind, affecting more than 3 billion people (48% of the population) worldwide. It is caused by a dominance of acid-producing bacteria that form biofilms on the surface of the teeth. Streptococcus mutans (S. mutans), a Gram-positive bacterium, is considered pivotal for the onset of this disease. Periodontal (gum) disease, which is the sixth most prevalent disease in humans with a global prevalence of 11.2%, is induced by Porphyromonas gingivalis (P. gingivalis), a Gram-negative bacterium. Notably, microbial dysbiosis in the oral cavity has been linked to systemic diseases such as obesity, Alzheimer’s and cardiovascular diseases. These microbials show high resistance to conventional antibiotics, and alternatives including nanotechnology are being intensively explored to provide more efficient therapeutics.

Moreover, fungal infections, another major oral disease with recognised clinical significance, have seen no advancement in the development of therapeutic drugs over the past several decades.

“Nano-materials are the hot topic in current materials science as these ultra-small particles can effectively penetrate into microorganisms and can also be used to carry a wide variety of drugs. Our research showed that these ultra-small nanodiamonds can manipulate genetic mechanisms in the pathogens and prevent their attachment to any surface, hence inhibiting biofilm formation in the oral cavity,” explained Dr Chu and Dr Neelakantan.

“The results of this exciting study demonstrated the great potential of NDs as an alternative therapeutic platform to prevent and treat oral infections. NDs possess many promising features including excellent biocompatibility and flexible surface properties. They are also proven to be very safe for humans. Our work will promote a better mechanistic understanding of NDs on oral pathogens, paving the way for their clinical and translational applications,” they added.

This knowledge and impact of NDs can also be translated to prevent other life-threatening infections in the body, in particular as antifungal drugs, for those vulnerable to fungal infections including very old and very young people, and those who are immunocompromised due to diseases such as HIV infections and diabetes, chronic users of steroids, and cancer patients undergoing chemotherapy. Since fungal cells are very similar to human cells, developing antifungal agents that are not harmful to humans has always been a major challenge.