The researchers’ original task was to figure out how certain polymer nanomaterials provided for a low-inflammatory immune response and yet were able to boost antibody production as part of a single dose of vaccine.

Once they learned how these nanomaterials just 20 to 30 billionths of a meter in size acted as vaccine-aiding adjuvants, they decided to take the next scientific step.

Could these same tiny adjuvants carry real-world antigens to the immune system’s B cells and turn them into antibody-secreting factories? In addition, could this be an alternative way to produce laboratory antibodies for diagnostic and therapeutic applications?

The answers were yes. Cell-culture experiments with the technique produced antibodies against key antigens from the coronavirus that causes COVID-19 and the bacterium that causes pneumonic plague.

The initial observation and subsequent discovery show how researchers affiliated with the Nanovaccine Institute based at Iowa State University look at their research from many perspectives:

“This is a great example of the healthy tug of war between a basic research finding about the mechanism of antibody production and a translational benefit that we may have invented a new antibody-production platform,” said Balaji Narasimhan, the director of the Nanovaccine Institute, an Iowa State Anson Marston Distinguished Professor in Engineering and the Vlasta Klima Balloun Faculty Chair. “The Nanovaccine Institute is burning both sides of that candle.” 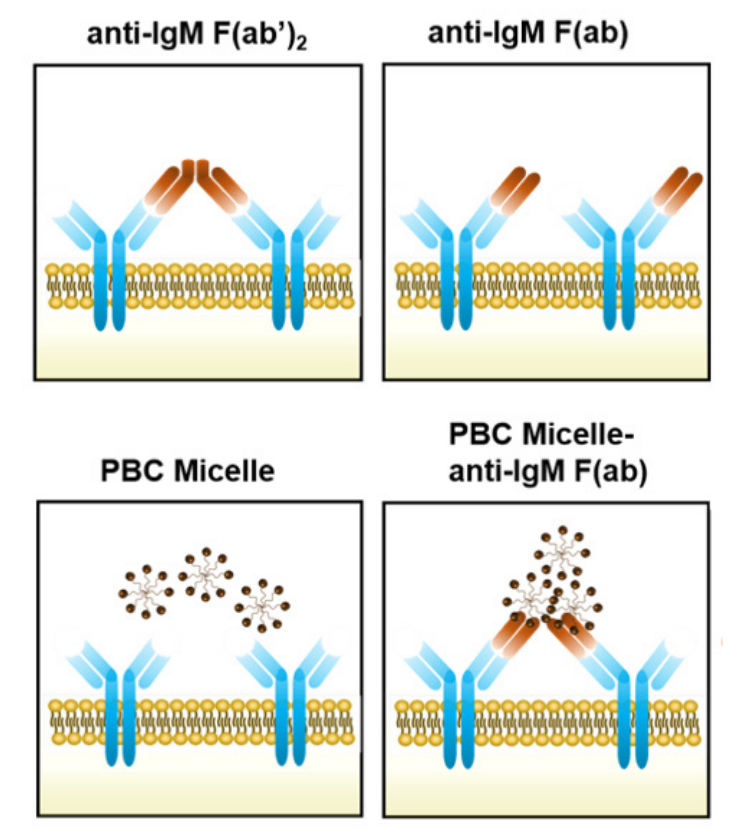 It was clear to the researchers that these nanomaterials – “pentablock copolymer micelles,” according to the researchers’ paper – helped B cells initiate antibody production. (Micelles are structures that self-assemble in water or oils as their molecules align because of their water-loving or water-hating properties.)

“From our studies, we understood very early on that these self-assembling micelles are different from the other types of adjuvants out there,” Senapati said. “What we didn’t know was the reason behind this unique type of immune response generated by them and that to me was the most intriguing part of this project.”

Mallapragada said the researchers were able to tailor the chemistry of the nanomaterials, creating “micelles with added functionality.”

One of those functions is the ability of positively charged micelles to associate with multiple antigens and directly interact with receptors on B cells, according to the paper. This cross-linking of the B cell receptors led to better antibody production and an enhanced immune response to a vaccine.

“These micelles act like a scaffold to cross-link two receptors,” said Michael Wannemuehler, an associate director of the Nanovaccine Institute and an Iowa State professor of veterinary microbiology and preventive medicine.

He said the cross-link is strong and stable, like a ladder hooked at both ends, and is effective at stimulating antibody production by the B cells.

That cellular activation came without the inflammatory response that accompanies other vaccine adjuvants, potentially producing a “‘just right’ immune response” that could be “critical in the rational design of vaccines for older adults” who often suffer from chronic inflammation, according to the paper.

Now that the researchers understood the “behind-the-scenes” mechanism of the micelles’ antibody boost, Senapati said they wanted to see what else they could find.

“The next obvious step then was to test our hypothesis with antigens from some real-world pathogens and see if these micelles could be potentially used to produce antibodies against them,” she said.

They used the micelle scaffolds to present antigens for SARS-CoV-2, the virus that causes COVID-19, and Yersinia pestis, the bacterium that causes pneumonic plague, to B cells in culture.

Those cells began generating “laboratory-scale quantities of therapeutic antibodies” against the two antigens, “further expanding the value of these nanomaterials to rapidly develop countermeasures against infectious diseases,” according to the paper.

Those antibodies could potentially be used for diagnostic test kits or for treatments such as the monoclonal antibodies that have been developed to treat COVID-19, Wannemuehler said.

“There are different ways to produce antibodies,” Narasimhan said. “The method we found is an alternative that could be quite powerful if it’s generalized to other diseases. It could be a plug-and-play platform.”

Because it’s an effective vaccine adjuvant and antibody producer, the paper says the nanomaterial platform developed by the study team is “a highly versatile tool in the development of multiple countermeasures against emerging and reemerging infectious diseases.”