Photothermal nanofibers were developed comprised of light-sensitive iron oxide nanoparticles (IONPs) embedded in electrospun nanofibers. We demonstrated that embryonic stem cells and human T cells, transfected with such nanofibers are in excellent health and retain their therapeutic functionality.

Cell-based therapies constitute a newer form of treatment in which genetically modified cells are injected in patient in order to prevent or treat illnesses. A well-known example is the use of a cancer patient’s own immune cells which can be isolated, genetically modified and expanded in a lab environment, and reinfused into the patient to attack the tumor cells. Genetic modification of cells depends on intracellular delivery technologies which often struggle with obtaining sufficient efficiency while having minimal impact on the cell’s health and functioning.

Nanoparticle-sensitized photoporation is particularly promising in this regard as it typically provides high efficiency, high throughput and low toxicity. It is based on the use of light-responsive nanoparticles, such as gold nanoparticles (NPs), which can form explosive nanobubbles upon pulsed laser irradiation. Those tiny explosions can induce small pores in cell membranes, allowing external effector molecules supplemented in the cell medium to enter into cells. 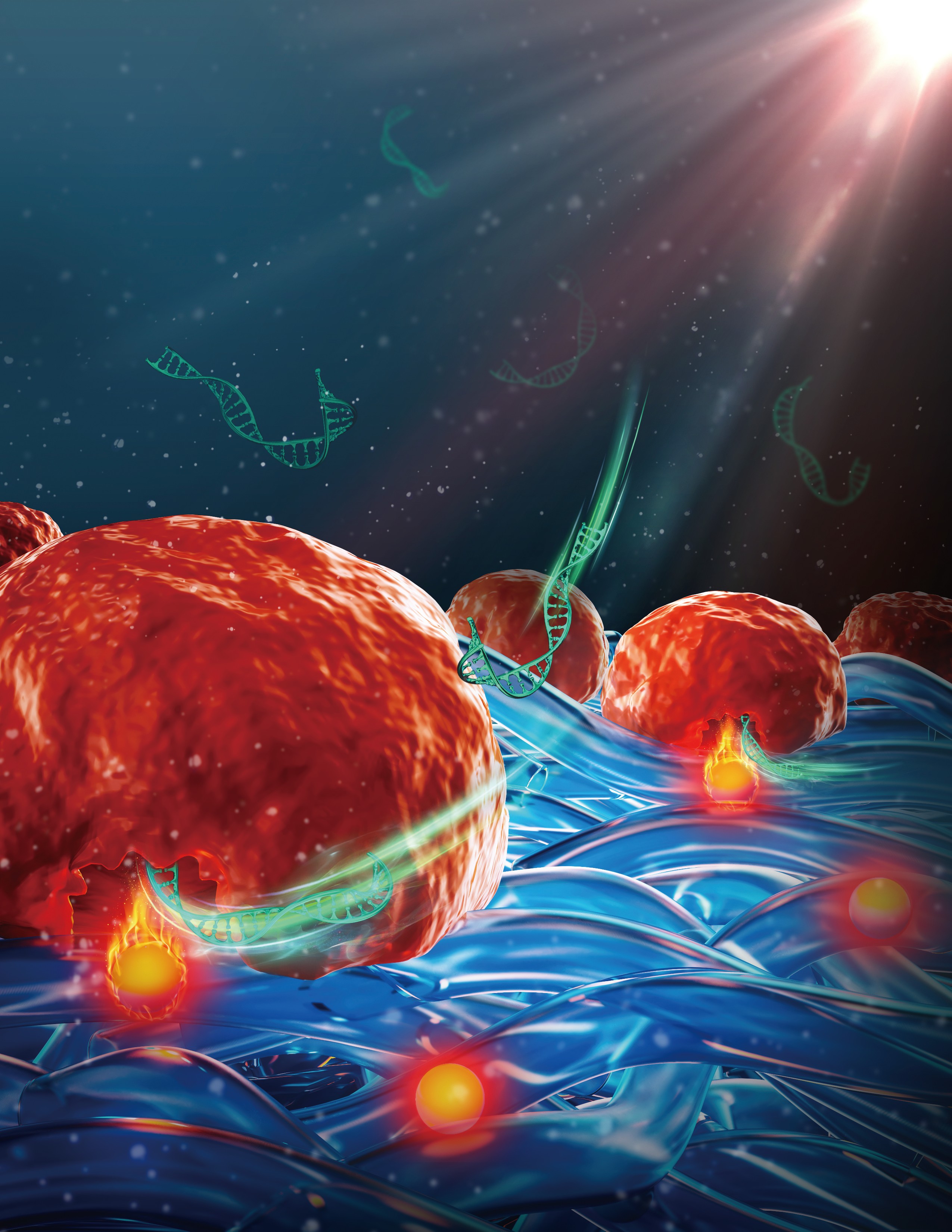 As shown in Figure 2, we embedded photothermal iron-oxide nanoparticles (IONPs) into biocompatible polymeric nanofibers which were produced by electrospinning. Polycaprolacton (PCL) is a biocompatible polymer widely used in biomedical applications, while IONPs are cost efficient and have a broad light absorption spectrum. 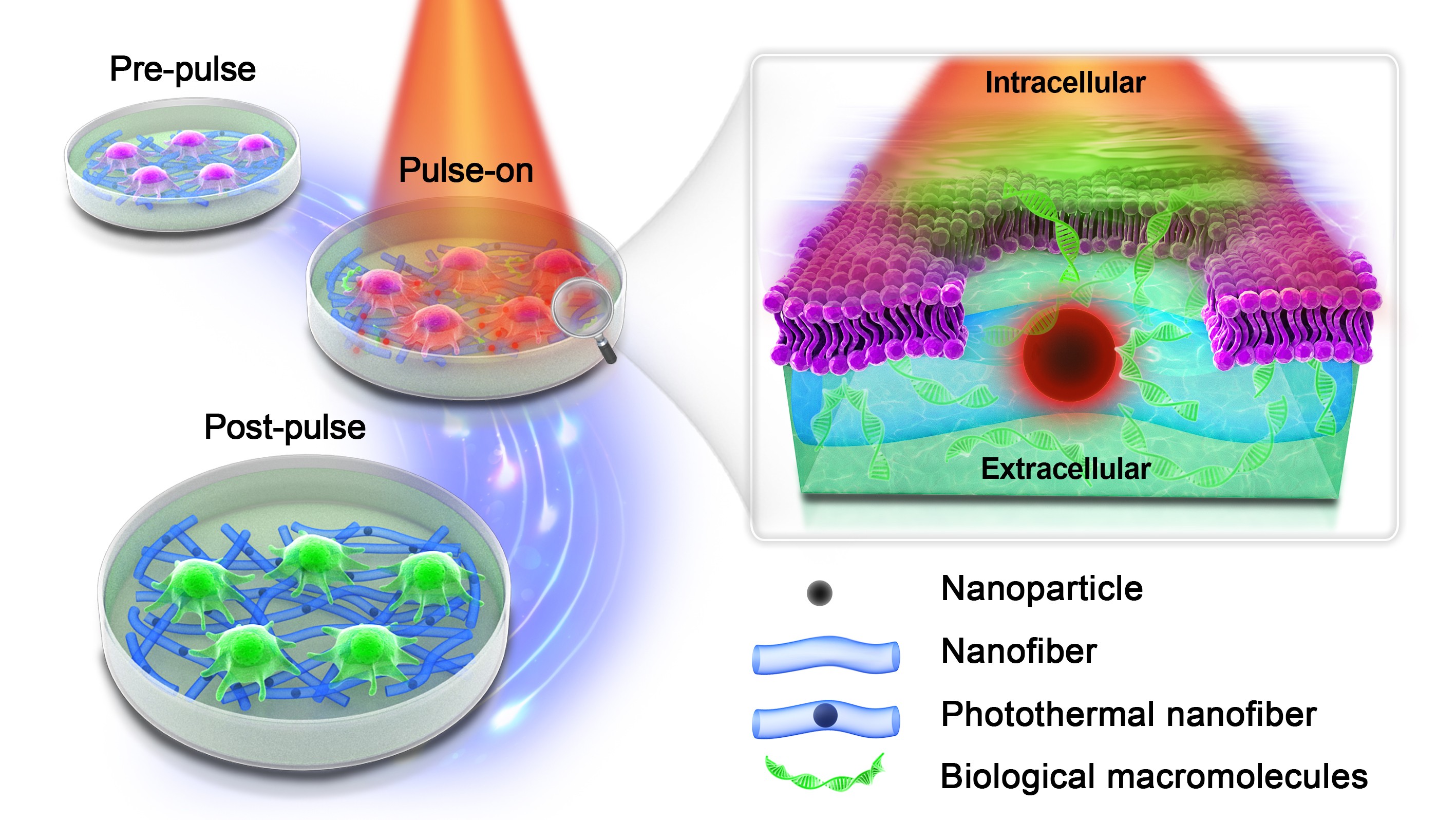 We showed that both adherent and suspension cells can be safely and efficiently transfected with a range of macromolecules upon irradiation with nanosecond laser pulses. By performing elemental analysis via inductively coupled plasma – tandem mass spectrometry (ICP-MS/MS), we confirmed that IONPs remain safely embedded in the nanofibers after laser irradiation so that the treated cells are effectively free from direct exposure to nanoparticles. Numerical simulations on heat transfer from fiber-embedded IONPs to nearby cells were performed to better understand how the laser pulse fluence, IONP distribution and aggregation state influence cell membrane permeability.

Experimentally we showed that photoporation with photothermal nanofibers could successfully deliver functional biological molecules, including siRNA or CRISP-Cas9 ribonucleoproteins (RNPs), to both adherent and suspension cells, including human embryonic stem cell (hESC) and primary human T cells. As a benchmark a comparison was performed with state-of-the-art electroporation. While electroporated cells suffered from changes to their phenotype and functionality, this was not the case for photoporated cells who retained their capacity to proliferate and, in case of CAR-T cells, to kill tumor cells.

Finally, PEN photoporation was used to transfect CAR-T cells with siRNA targeting the PD1 receptor, a well-known immune checkpoint inhibitor. siPD1 treated cells were confirmed to have enhanced tumor killing capacity in vivo. Together it shows that photoporation with photothermal nanofibers enables efficient and safe intracellular delivery of a broad range of effector molecules in a variety of cell types without contact to potentially toxic photothermal nanoparticles. We believe this is an important step towards the use of photoporation for safe and efficient production of gene modified cell therapies.