A heart attack kills heart muscle cells, leading to a scar that weakens the heart, often leading to eventual heart failure. The lack of muscle repair is due to the very limited ability of mammalian heart muscle cells to proliferate, except for a brief period around birth.

Thus, a pharmaceutical product called TT-10, which acts through components of the Hippo-Yap signaling pathway to spur proliferation of heart muscle cells, was thought to offer promise to treat heart attacks. Intraperitoneal injections of TT-10 in a mouse heart-attack model several years ago at first promoted proliferation of heart muscle cells and showed declines in the size of the dead area of heart muscle, known as an infarct, one week after administration. However, those early improvements were followed by worsened cardiac function at later time points. 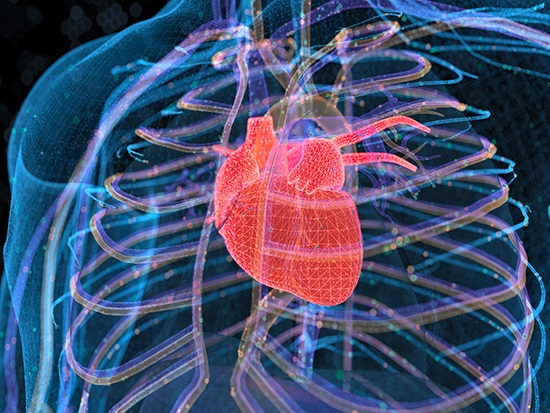 So, Jianyi “Jay” Zhang, M.D., Ph.D., and his University of Alabama at Birmingham Department of Biomedical Engineering colleagues asked a simple question: What would happen if TT-10 were loaded into nanoparticles made of poly-lactic-co-glycolic-acid, or PLGA, which would then allow the slow release of TT-10?

Slow release indeed turned out to be beneficial, as Zhang and UAB colleagues report in the journal JCI Insight. Nanoparticle-mediated, slow-release delivery of TT-10 enhanced the potency and durability of TT-10 treatment for repair of heart muscle in the mouse heart-attack model.

The researchers also measured the effects of TT-10 on the biology of heart muscle cells, known as cardiomyocytes, and on several markers of cell reproduction, both in culture and in the mouse heart-attack model.

Human induced pluripotent stem-cell cardiomyocytes grown in different concentrations of TT-10 showed increased molecular markers for proliferation, the S-phase of the cell cycle (when the cell replicates its genome content), the M-phase of the cell cycle (when the cell divides the copied DNA) and cytokinesis (when the cytoplasm of the two daughter cells is split in two). Peak activity was seen at TT-10 concentrations of 10 to 20 micromolar.

The cultured cardiomyocytes also showed significantly reduced programmed cell death, or apoptosis, and a significantly increased proportion of cardiomyocytes with the transcriptional co-activator Yap located in the nuclei. That presence of Yap in the nucleus, where it actively aids gene expression, is consistent with a role for Hippo-Yap signaling in cardiac regeneration, Zhang says.

Hearts treated with TT-10 nanoparticles in the mouse heart-attack model had dramatically more border-zone cardiomyocytes that showed markers for cell proliferation, M-phase growth and nuclear location of Yap at one week after infarction, compared to the other three treatment groups. The border zone is the area next to the infarct. Also, the TT-10 nanoparticle treatment appeared to promote blood vessel growth, called angiogenesis.

This suggests that the improvements in myocardial recovery observed in TT-10 nanoparticle-treated mice appeared to be, at least partially, attributable to the activation of Hippo-Yap signaling and cardiomyocyte proliferation, the UAB researchers say.

“Thus, our results suggest that PLGA nanoparticles could be used to improve the efficiency of treatment administration for numerous cardiovascular drugs,” Zhang said. “Furthermore, although the animals in our current investigation were treated with TT-10 nanoparticles via direct intramyocardial injections during open-chest surgery, PLGA nanoparticles are fully compatible with less invasive clinical delivery methods, such as catheter-based or echo-guided transthoracic myocardial injection.”

Read the original article on The University of Alabama at Birmingham.