Microscopic Nanotech Color Slides Could Change How We Identify Disease

It's called the NanoMslide: Five years in development, it's able to work in tandem with a conventional microscope to bring cancer cells out in distinct colors, enabling experts to spot signs of the disease much more easily.

The new technology is based on the physics of plasmons – oscillations in charged particles, such as electrons. Thin layers of silver provide whole fields of free-roaming electrons, which, when stimulated by light, line up in a specific fashion.

Poking tiny, nanosized pores into the silver manipulates the light's structure, so as it passes up through tissue, certain colors will be selected, producing a spectrum that depends on subtle differences in the sample's structure and – importantly – its own electron configurations.

Effectively, the microscope slide becomes a sensor, revealing the composition of the cells placed on it through a color-coded light show. It promises to enable disease diagnosis that's made earlier and quicker than before, without the labor-intensive application of stains that risk damaging samples. 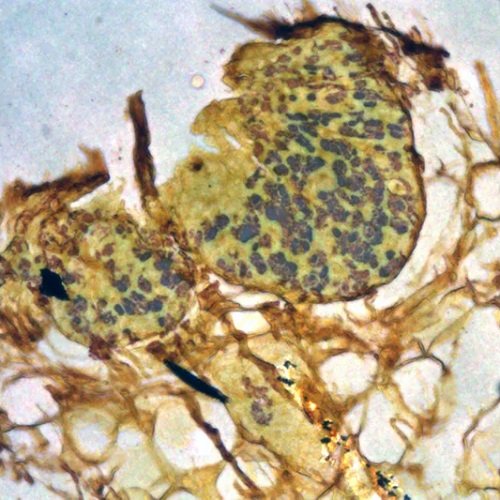 Cancerous cells highlighted under the microscope.

"When I first looked at a tissue under the microscope on the NanoMslide, I was incredibly excited," says biochemist Belinda Parker from La Trobe University in Australia.

"For the first time I saw cancer cells just popping up at me. They were a different color from the surrounding tissue, and it was very easy to distinguish them from surrounding cells."

Parker and her colleagues describe the difference as going from black and white television to color – so quite a jump. With existing techniques, trying to identify cancer cells under a microscope can be a bit like looking for a needle in a haystack.

The team used a variety of advanced fabrication techniques, some of which have only just been developed, to produce their slides. Once the technology is scaled up, it should prove helpful in a range of medical and non-medical settings.

These nanotech slides require much less preparation time than existing techniques, and results can be obtained in as little as 10 minutes. In time-critical situations – deciding which parts of a tumor to remove during surgery, for example – that's hugely beneficial.

"Current approaches to tissue imaging often rely on staining or labeling cells in order to render them visible under the microscope," says physicist and chemist Brian Abbey, also from La Trobe University.

"Even with staining or labeling, it can be challenging for pathologists to detect cancer cells, with the risk that some samples are misdiagnosed, particularly during the very early stages of disease."

As effective as the NanoMslide is, the researchers still aren't exactly sure what distinguishes the different colors: It could be the proteins in the cells, they suggest, or something to do with the cell skeletons, or how the cells are organized.

A study has already been completed showing how the nanotechnology improves the process of picking out early-stage breast cancer from benign lesions, using both human tissue and a mouse model: visually, the cancer cells showed "good differentiation" from other cells, the researchers report.

The team is now confident that the NanoMslide can be adapted to look for a variety of types of cancers and even different diseases altogether. Its creators are currently working to get the tech into a form that can be used commercially.

"Our vision is to extend our technology to assist the diagnosis of a range of other cancers by analyzing all sorts of tissue sections, as well as use in plant biology and agriculture," says Abbey.

The research has been published in Nature.