Team Engineers New Way to Get Medication Past Blood-brain Barrier

A University of Texas at Dallas-led team of researchers has developed a new technique to open the blood-brain barrier temporarily to deliver medication to the brain.

Getting medication past the brain’s unique and protective blood vessels, known as the blood-brain barrier, is one of the biggest challenges in treating brain and central nervous system diseases, said Dr. Zhenpeng Qin, associate professor of mechanical engineering at UT Dallas and co-corresponding author of the study that describes the method. The technique uses light and nanoparticles to pry open temporarily these barriers — called tight junctions — to allow medication to reach its target.

Qin and his colleagues in the Erik Jonsson School of Engineering and Computer Science and at other institutions demonstrated the approach in mice in a study published online Sept. 13 in the journal Nano Letters.

The findings are the result of five years of research funded in part by the Cancer Prevention and Research Institute of Texas (CPRIT). Qin said the approach could lead to treatments for brain tumors and Lou Gehrig’s disease, also known as amyotrophic lateral sclerosis; aid in stroke recovery; and deliver gene therapy. Qin said further development and testing is needed before it could be used in humans. 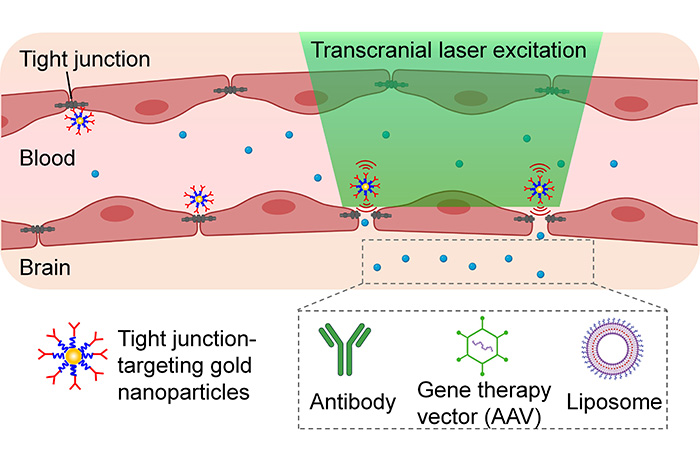 Researchers synthesized gold nanoparticles to target the tight junction specifically and demonstrated that transcranial picosecond laser stimulation of the nanoparticles post-intravenous injection increases the permeability of the blood-brain barrier.

The technique involves injecting gold nanoparticles, which absorb light, into the bloodstream to target the blood-brain barrier. Researchers apply picosecond (one-trillionth of a second) laser pulses externally to activate the gold nanoparticles.

“The action produces a tiny mechanical force that temporarily breaks the barrier open so a drug can enter the blood flow into the brain,” Li said.

The study demonstrated that the technique did not damage the blood-brain barrier or the constriction and dilation of blood vessels, called vasomotion.

“We demonstrated that the BBB permeability can be modulated without significant disruption to the spontaneous vasomotion or the structure of the neurovascular unit,” said Dr. Qi Cai, mechanical engineering research associate and co-lead author of the paper.

In their experiments, the researchers tested the method with cargos of antibodies, liposomes and adeno-associated viral vectors, which can be used to carry gene-editing components.

In August, Qin received a fourth CPRIT grant to study whether the method can be used to treat glioblastoma, the most common malignant brain tumor in adults. He and his team aim to design and produce magnetic nanoparticles that can be stimulated to disrupt the blood-brain barrier using magnetic fields.

“Support from CPRIT has been instrumental in our work,” said Qin, who received grants from the state agency — the second-largest cancer research and prevention program in the world — in 2016, 2018 and 2019. “When we started, we had an idea, basically to use nanoparticles to target specific components of the blood-brain barrier with minimal injury.”

The collaboration also included researchers from the Italian Foundation for Cancer Research Institute of Molecular Oncology, the Smurfit Institute of Genetics at Trinity College Dublin, and the University of California, San Diego.

In addition to CPRIT, funding for the research came from the American Heart Association, the National Institutes of Health, the European Research Council and Fondazione Cariplo.