By combining two microscopy methods, EPFL researchers are able to see what is happening inside a cell and on its membrane simultaneously, giving unprecedented insight into the cellular processes that occur during infection, for example.

Cells are the fundamental component of living organisms and play host to a number of complex biological phenomena. Researchers need to be able to study these phenomena in detail in order to comprehend certain kinds of disorders and diseases and then develop effective treatments. But effectively observing living cells on a micro- or nano-scale remains a challenge. By combining two different microscopy methods, EPFL researchers from two different labs have jointly developed a system that can be used to watch living cells in action with unparalleled precision. Their findings appear in two articles: one published in Nature Communications in July and the other being published today in ACS Nano.

“The methods currently available present many technical challenges to observe live cells at such a granular level,” says Georg Fantner, the head of EPFL’s Laboratory for Bio- and Nano- Instrumentation (LBNI). “Techniques such as electron microscopy allows unmatched resolution of the cell surface at the nanoscale, but it requires placing samples under vacuum and bombarding them with electrons. Living organisms simply cannot survive that kind of treatment. Another common method is fluorescence microscopy. Although it lets you observe samples without destroying them, to have sufficient resolution to resolve the three dimensional surface of the cell is difficult . Additionally, the dose of photons required can causes cell damage.” 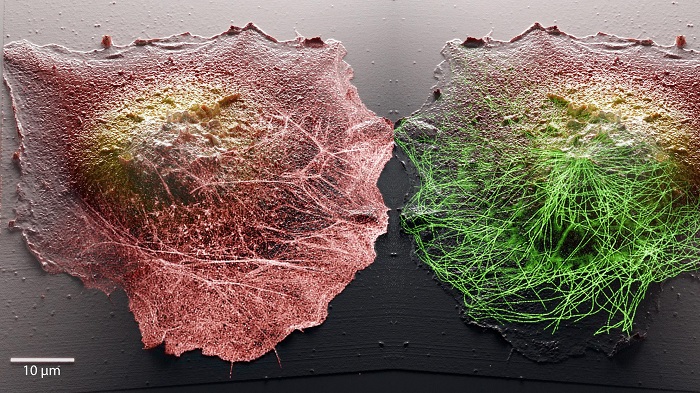 A new combination of microscope techniques allows scientists to image cells inside and out in high definition and 3D.

The EPFL researchers, therefore, decided to combine two complementary microscopies to observe the cell surface and molecular activity inside, that are minimally invasive for live cells. They coupled stochastic optical fluctuation imaging (SOFI), which can be used to view targeted molecules and phenomena occurring inside cells, with scanning probe microscopy (or, more specifically, scanning ion conductance microscopy - SICM). Scanning probe microscopy generally involves touching a cell sample directly with a probe tip in order to reveal its surface and map out its topography. However, the mechanical contact between the sample and the tip is detrimental to the observation of live cells because it disturbs the cells’ native state. The EPFL team, therefore, developed a microscope where the physical probe is replaced by a glass nanopore that measures the flow of ions to detect the cell surface without contact.

It’s all about interaction

Combining these two methods paves the way to unprecedented scientific observations. While fluorescence microscopy gives researchers a peek inside individual cells, scanning ion conductance microscopy lets them generate 3D topographic images of cell membranes. The EPFL system therefore enables researchers to view the interior and exterior of cells at the same time, giving them valuable insight into the links between phenomena occurring simultaneously in those two different places. 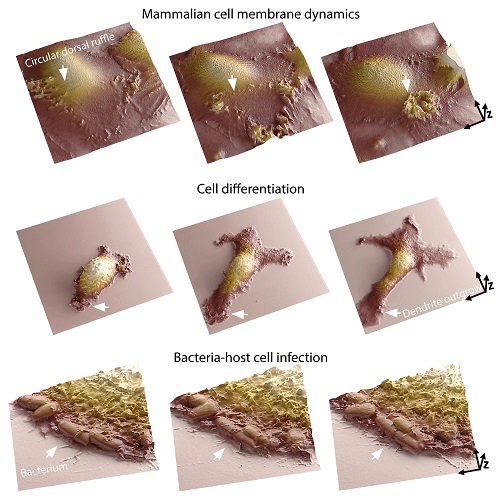 “A cell’s membrane is the place where it interacts with its surroundings,” says Samuel Mendes Leitão, a PhD student at LBNI that developed the SICM microscope. “It’s where many biological processes and morphological changes occur, like during cell infection. Our system lets researchers analyze molecular arrangements inside the cell, and map out how they correlate with membrane dynamics. Moreover, we can now track those dynamics in great detail for temporal ranges of sub-second to days. Being able to image continuously at the nanoscale for long periods is one of the main challenges in live-cell microscopy, as cells are very sensitive to small perturbations.”

Vytautas Navikas, a PhD student at EPFL’s Laboratory of Nanoscale Biology (LBEN), developed the system’s optical components: “Another benefit of combining the two methods is that it incredibly improves image quality. We can now watch cellular processes with much greater resolution.”

The EPFL team believes that their system, which can be used for observing phenomena like cell motility, differentiation and cell-cell communication, opens up many new avenues of research. It could be extremely useful in infection biology, immunology and neurobiology – fields where it’s important to understand how a cell reacts in real-time to an outside stimulus.

This study is also a good example of the type of breakthrough that can happen when researchers from two different EPFL labs come into contact and pool their expertise in pursuit of a common goal.