Researchers at ETH Zurich have developed a new photocatalyst made from an aerogel that could enable more efficient hydrogen production. The key is sophisticated pretreatment of the material.

Aerogels are extraordinary materials that have set Guinness World Records more than a dozen times, including as the world’s lightest solids.

Professor Markus Niederberger from the Laboratory for Multifunctional Materials at ETH Zurich has been working with these special materials for some time. His lab specialises in aerogels composed of crystalline semiconductor nanoparticles. “We are the only group in the world that can produce this kind of aerogel at such high quality,” he says.

One use for aerogels based on nanoparticles is as photocatalysts. These are employed whenever a chemical reaction needs to be enabled or accelerated with the aid of sunlight – one example being the production of hydrogen.

The material of choice for photocatalysts is titanium dioxide (TiO2), a semiconductor. But TiO2 has a major disadvantage: it can absorb only the UV portion of sunlight – just about 5 percent of the spectrum. If photocatalysis is to be efficient and industrially useful, the catalyst must be able to utilise a broader range of wavelengths.

Broadening the spectrum with nitrogen doping

That is why Niederberger’s doctoral student Junggou Kwon has been looking for a new way to optimise an aerogel made of TiO2 nanoparticles. And she had a brilliant idea: if the TiO2 nanoparticle aerogel is “doped” (to use the technical term) with nitrogen, such that individual oxygen atoms in the material are replaced by nitrogen atoms, the aerogel can then absorb further visible portions of the spectrum. The doping process leaves the aerogel’s porous structure intact. The study on this method was recently published in the journal Applied Materials & Interfaces.

Kwon first produced the aerogel using TiO2 nanoparticles and small amounts of the noble metal palladium, which plays a key role in the photocatalytic production of hydrogen. She then placed the aerogel in a reactor and infused it with ammonia gas. This caused individual nitrogen atoms to embed themselves in the crystal structure of the TiO2 nanoparticles.

To test whether an aerogel modified in this way actually increases the efficiency of a desired chemical reaction – in this case, the production of hydrogen from methanol and water – Kwon developed a special reactor into which she directly placed the aerogel monolith. She then introduced a vapour of water and methanol to the aerogel in the reactor before irradiating it with two LED lights. The gaseous mixture diffuses through the aerogel’s pores, where it is converted into the desired hydrogen on the surface of the TiO2 and palladium nanoparticles. 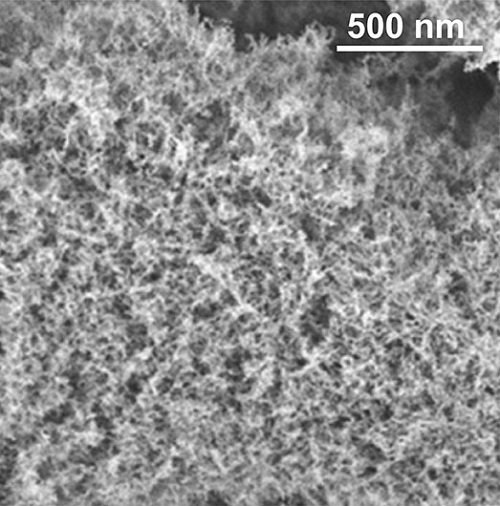 Image of the sponge-​like internal structure of the aerogel.

Kwon stopped the experiment after five days, but up to that point, the reaction was stable and proceeded continuously in the test system. “The process would probably have been stable for longer,” Niederberger says. “Especially with regard to industrial applications, it’s important for it to be stable for as long as possible.” The researchers were satisfied with the reaction’s results as well. Adding the noble metal palladium significantly increased the conversion efficiency: using aerogels with palladium produced up to 70 times more hydrogen than using those without.

This experiment served the researchers primarily as a feasibility study. As a new class of photocatalysts, aerogels offer an exceptional three-​dimensional structure and offer potential for many other interesting gas-​phase reactions in addition to hydrogen production. Compared to the electrolysis commonly used today, photocatalysts have the advantage that they could be used to produce hydrogen using only light rather than electricity.

Whether the aerogel developed by Niederberger’s group will ever be used on a large scale is still uncertain. For example, there is still a question of how to accelerate the gas flow through the aerogel; at the moment, the extremely small pores hinder the gas flow too much. “To operate such a system on an industrial scale, we first have to increase the gas flow and also improve the irradiation of the aerogels,” Niederberger says. He and his group are already working on these issues.