Millimeter-thin wirelessly rechargeable fiber batteries can be woven into clothing to help serve as the hub for a wearable network of electronics, a new study finds.

Wearable electronics are becoming increasingly popular, with a total market worth nearly $80 billion in 2020, tripling in terms of annual revenue since 2014, according to emerging technology analyst firm IDTechEx in Cambridge, England. As such, researchers have sought to develop more and more powerful sources of energy for wearable devices that are also flexible enough to conform comfortably to the human body.

Although flexible supercapacitors possess high power density, their relatively low energy density and short durations of discharge limit their practical applications. Flexible lithium-ion batteries have a higher energy density, but there are fundamental concerns about their safety that restrict their widespread adoption in wearable technology.

Enter zinc ion batteries, a promising flexible energy-storage technology for wearables that theoretically possesses high capacity at low cost with good safety. However, the gel electrolytes that help electric charge flow within these batteries have proven challenging to fabricate, and often have poor mechanical properties and low ion conductivity.

Now scientists have developed rechargeable zinc ion batteries with relatively high energy densities of 91 watt-hours per liter, comparable to lithium-ion battery energy densities of 250 to 670 watt-hours per liter. They could fabricate the batteries as fibers just one millimeter in diameter, which proved roughly as elastic as human skin, capable of stretching 230% without breaking, low cost at $0.64 per 15 centimeters, and lightweight at 1.26 grams per 15 centimeters.

The new zinc-manganese dioxide battery uses an electrolyte made in a simple and scalable way from two common materials, a polyvinyl alcohol hydrogel and graphene oxide flakes, Xiao says. The flakes sprinkled evenly throughout the hydrogel help give the electrolyte a high ion conductivity of 21 millisiemens per centimeter, roughly comparable to electrolytes used in lithium-ion batteries. The hydrogel made the electrolyte flexible and even capable of self-healing—when the material got cut, bringing the cut pieces in contact was enough to bond them back together.

Previous research developed a yarn-like zinc ion battery for use in smart clothes. However, this prior work displayed lower energy densities and also depended on relatively expensive carbon nanotubes, whereas this new work may be more scalable due to its use of graphene oxide flakes.

In experiments, the new fiber batteries displayed stable performance over more than 500 hours of discharging and recharging, maintaining 98% capacity after more than 1,000 such cycles. When connected to a wireless charging terminal, the scientists noted these batteries could wirelessly charge or get wirelessly charged by smartphones or other devices.

By encapsulating these fibers in silicone, the researchers made these batteries stable in air and waterproof enough to supply power even when submerged in water. These sheaths also protected human skin from the batteries. 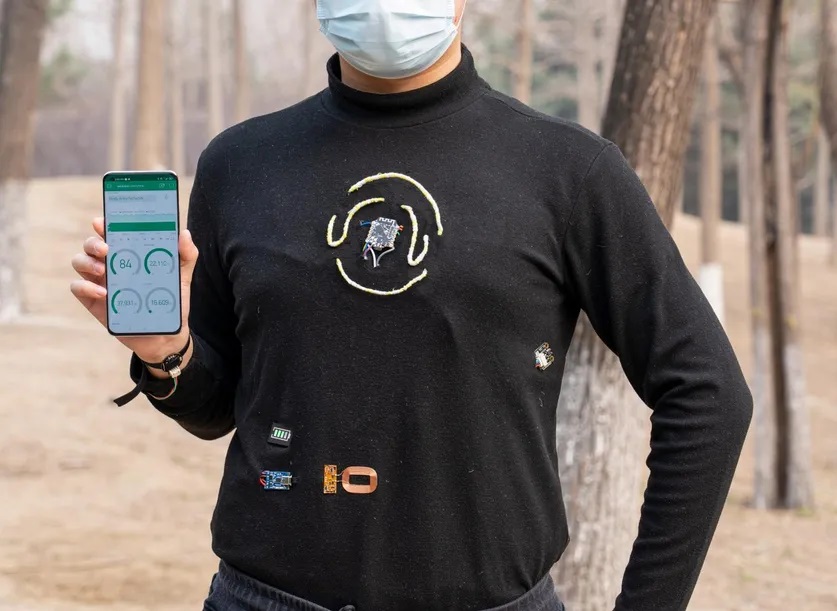 Demonstration of a textile body area network (TBAN) powered by the fabric battery.

The researchers suggested this wearable power supply could serve as the hub for a textile body area network (TBAN), analogous to the local area networks that link computers and peripherals in homes and offices. Inspired by this idea, they incorporated their fiber batteries into a shirt in which they embedded multiple sensors, circuits and a wireless charging terminal as well. The garment could measure heart rate, temperature, humidity and altitude signals and wirelessly send this data to a smartphone via Bluetooth, and a volunteer wore and tested it as they climbed to show it could work outdoors during exercise.

"We believe that a fiber-battery-powered TBAN will become the direction of future smart clothes, and this work will provide a promising roadmap toward personalized healthcare," Xiao says.

This prototype garment employed rigid sensors. In the future, the scientists aim to develop flexible sensors, as well as fabrics that can harvest the energy from bodily motions to generate electricity, and even textile screens, Xiao says.

"Our goal is to make the smart fabric comfortable to use outside, and durable for outdoor activities such as mountain climbing and hiking," he adds.

Xiao and his colleagues detailed their findings in the journal Science Advances.