In a recent study published in Matter, Chinese researchers observed the dynamic gating process at sub-2 nm speed in nanochannels.

Dr. ZHOU Yahong from Prof. JIANG Lei's team of the Technical Institute of Physics and Chemistry of the Chinese Academy of Sciences, together with researchers from the South China University of Technology (SCUT) and the Peking University School and Hospital of Stomatology, has developed a novel nanoporous gating system that can precisely control and observe dynamic gating processes.

Before this study, researchers focused on the terminal "open" and "closed" states in response to changes of environments. The group led by Prof. JIANG Lei have completed a series of fundamental studies about smart gating nanoporous membrane.

Now the researchers are curious about the dynamic gating process. However, achieving the exquisitely tuning radius of the nanochannels still remains a challenge, especially at a quantitatively nanoscale speed.

In this study, they integrated the conducting polymer polypyrrole into the nanochannels. They observed that the degree of contraction or swelling of the polymer film is associated with the amount of charging electrons and holes. Therefore, the controlled dynamic gating process through the conducting polymer nanoporous membranes was realized, the radius of which could modulate 1.5 nm each time with minimum value. 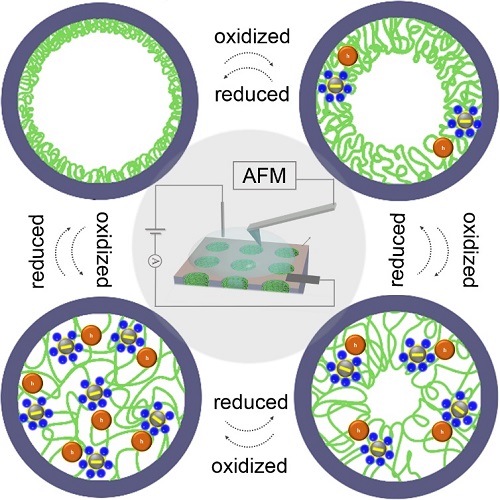 Furthermore, the researchers directly observed successive polymer chain variations at nanoscale (ca. 10 nm) by atomic force microscopy topography in situ. This was highly praised by the peer reviewers as well.

"Small operation voltage (-0.5 to 0.8 volts) combined with 83% thickness change makes this membrane promising for smart nanorobot and bioactuator applications. And controlling the radius change at sub-2 nm gives some inspiration towards the advanced separation membrane on nanoscale in the future," said Dr. ZHOU.