NUS scientists have developed a general wet-chemistry approach for the scalable and automated synthesis of a library of ultra-high-density single-atom catalysts (UHD-SACs) for 15 common transition metals on chemically distinct carriers via a controlled two-step thermal annealing strategy.

Catalysts play an important role in a number of industrial chemical processes and there is an increasing need for more advanced versions to improve their effectiveness. Heterogeneous single atom catalysts (SACs) are a new class of catalysts that consists of isolated metal atoms singly dispersed on the surface of supports.

Their unique geometric and electronic properties have the potential to significantly improve selectivity of the targeted catalytic reactions and lower operational costs. Since the concept of SACs was coined in 2011, interest in this class of SACs materials has surged globally focusing on their use to improve the efficiency of chemical transformations for sustainable industrial processes.

A fundamental challenge for implementing this pioneering class of catalysts in many technical applications is the lack of synthetic routes to produce them with high surface densities. Achieving the latter is particularly important to maximise the productivity of the catalysts in large scale industrial processes.

A NUS research team led by Prof Jiong LU from the Department of Chemistry and the Institute for Functional Intelligent Materials, National University of Singapore have addressed this challenging issue by developing a scalable and versatile two-step annealing method for preparing libraries of ultra-high-density SACs.

This work is a collaboration involving Prof Javier Pérez-Ramírez from ETH Zurich, Prof Jun LI from Tsinghua University and Dr Xiaoxu ZHAO from Nanyang Technological University (NTU). The method leverages on the control of ligand removal from metal precursors and their associated interactions with the carrier to saturate the material surface with metal atoms.

A selective anchoring mechanism that maximises the probability of bonding the metal atom to all available coordination sites on the material surface helps to retain a high level of metal coverage. Metal atoms which are not attached are then removed by washing. This prevents potential metal sintering in the subsequent high-temperature annealing step used to remove the residual ligands.

The annealing step also allows for the stabilisation of the much higher metal contents compared to conventional impregnation routes (see Figure (a)). This scalable synthetic route for the development of UHD-SACs has been demonstrated for 15 common transition metals using chemically-distinct carriers of different nature (including nitrogen-doped carbon, polymeric carbon nitride, ceria, alumina and titania) with loading exceeding 20 wt.% (see Figure (b)).

In addition, the proposed approach is readily amenable to a standardised, automated protocol (see Figure (c) and Figure (d)) demonstrating its robustness and provides a viable path to explore a large number of libraries of mono- or multi-metallic catalysts. 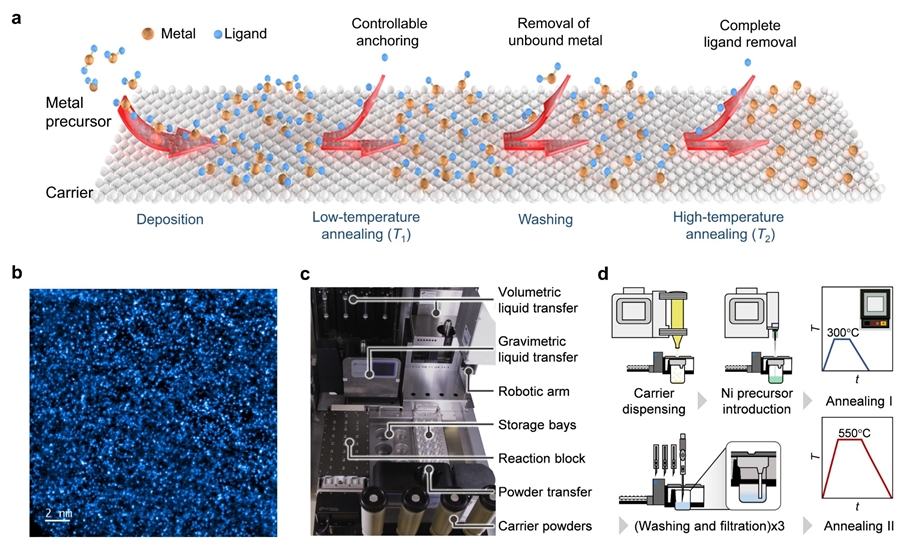 The team showed the potential benefits from high-loading of SACs in distinct catalytic systems, which range from electrochemical, thermal and organic catalysis, exemplifying the need to optimise the surface metal density for a specific catalytic application. Moreover, loading-dependent site-specific activity observed in distinct catalytic systems reflects the well-known complexity in heterogeneous catalyst design. This now can be tackled with a library of SACs with widely tunable metal loadings.

Prof Lu said, “Our work has solved long-standing issues in single-atom catalysis, including loading density and scalable fabrication of this pioneering class of UHD-SACs. This is crucial for their industrial implementation in sustainable chemical and energy transformations.”