Bringing Nanophotonics into the Brain

The brain has always been considered as the main organ in the body that controls all human activities. Currently, optogenetics is one of the methods that employed to measure neuronal activity and study brain function. Optogenetics is a method for controlling a neuron’s activity using light and genetic engineering.

In optogenetic studies, scientists take the genetic code of the neurons they want to study and add a new piece of code to it. The new code allows these neurons to make special proteins, called opsins, which respond to light. It is important to remember that the power of optogenetics is limited by the degree to which these proteins can be selectively expressed and activated in specific neuronal cell types in vitro and in vivo. In other word, the dependency of optogenetics to genetically encoded proteins, limits its translational applicability.

The EU-funded NanoBRIGHT (Bringing nano-photonics into the brain) project is developing a novel technology based on the interaction of light with metallic nanostructures which will increase the range of physiological phenomena that can be controlled and monitored by light in vivo. This includes the modulation of the blood–brain barrier's permeability to allow pharmacological targeting of the brain, as well as the possibility to identify tumorigenic tissue without the need of a biopsy. The new approach will advance the treatment of pathological conditions including brain tumors, epilepsy and traumatic brain injuries.

The ' NanoBRIGHT ' project will have a multidisciplinary team of physicists, nanotechnologists, tumor biologists and neuroscientists, and has funding from the European Commission of 3.5 million euros for the next four years, through one of the most technologically ambitious funding systems, the FET-Future and Emerging Technologies. The project is coordinated by the Italian Institute of Technology (IIT) and three other institute from France and Spain are collaborating in the project.

"In the spirit of the FET-Open funding scheme, we want to explore new scenarios to improve the understanding of diseases such as brain tumors and epilepsy, and at the same time lay the foundations for a new generation of medical devices", explains Ferruccio Pisanello, researcher at the IIT Center for Biomolecular Nanotechnologies in Lecce and project coordinator.

In this project a special light probe will help to study the brain diseases. The construction of the probe will be achieved through the use of metallic nanostructures (known as plasmonic structures), which will act as amplifiers of the light signal. The device will be able to direct the light in a precise way and generate a physical interaction with the group of cells to be studied so as to read their properties and, at a later time, operate in a therapeutic way.

For example, it will be possible to study the oxidative stress of nerve cells that arises in head trauma and epilepsy, as well as the molecular characteristics of tumors in the central nervous system, discriminating their type, or whether it is more or less invasive, without the need for resort to biopsies. Furthermore, the same structures could be used to locally vary the temperature and induce, only in the tumor site, an increase in the permeability of the blood brain barrier (which usually prevents the administration of drugs in the brain), allowing the localized passage of chemotherapeutic drugs. 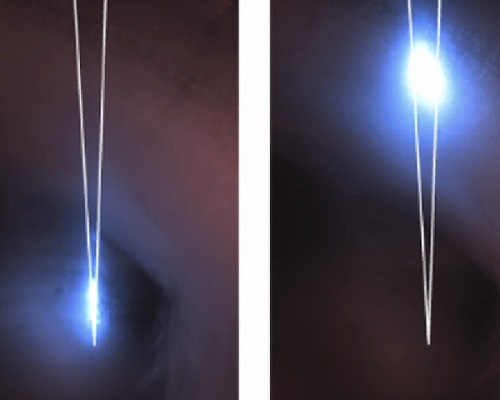 So far, the researchers of the project published 3 articles which one of them ‘Nanofiber based displacement sensor’ explains the properties of optical sensor that has application in optogenetics and could have sensitivity up to 1.2 nm/√Hz.

"Optical applications, such as optogenetics, are revolutionizing the study of neurological diseases, but they face an important limitation in their clinical translation due to the need to genetically modify the area to be intervened to make it sensitive to light. With NanoBRIGHT we seek exploiting the natural properties of light in its interaction with matter without the need to modify neuronal tissue. This represents a radical change in concept ", says CSIC researcher Liset Menendez de la Prida, director of the neuroscientific application of the project and expert in the study of epilepsy.