At extremely small scales, looks can be deceiving. While at first glance you might see lily pads floating on a tranquil pond, this image is actually a clever adaptation of a snapshot taken on a scanning electron microscope.

In reality, the green spots are only a few micrometers across – smaller than width of a human hair. They make up a surface coating that was developed to limit the transmission of SARS-CoV-2, the virus that causes COVID-19. The coating is composed of a silver-based material applied to a glass surface. The lotus flower, though, was some added artistic flair courtesy of image-editing software.

Mohsen Hosseini, Ph.D. candidate in chemical engineering, and William Ducker, professor of chemical engineering, recently won an award in the National Nanotechnology Coordinated Infrastructure (NNCI) image contest with this image. Both Hosseini and Ducker are affiliated with the Macromolecules Innovation Institute (MII).

Their win was in the category “most whimsical.”

“As part of the rigor involved in scientific research, I am always careful to maintain the accuracy of my original results,” said Hosseini. “However, this competition was very freeing. It gave me a chance to take my scanning electron microscopy results and legitimately alter it in any way that I chose. It was liberating and fun to express my artistic style. The result isn’t a Monet, but I am glad people liked it.” 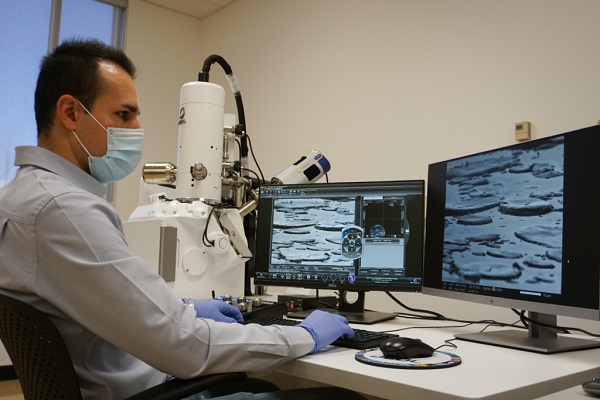 Mohsen Hosseini views the images produced by the JEOL IT500 scanning electron microscope, located in the Nanoscale Characterization and Fabrication Laboratory.

The image contest, titled “Plenty of Beauty at the Bottom,” is hosted annually by NNCI in celebration of National Nano Day, which occurred on Oct. 9, 2021. Funded by the National Science Foundation, the NNCI is a network of 16 sites around the country that are dedicated to supporting nanoscience and nanotechnology research and development. Virginia Tech’s NanoEarth center is part of that network, working to advance earth and environmental nanotechnology infrastructure. This image was captured using a scanning electron microscope (SEM) that is part of the Nanoscale Characterization and Fabrication Laboratory (NCFL) in the Virginia Tech Corporate Research Center. This SEM is the latest addition to the instrument suite at the NCFL, which is an initiative of the Institute for Critical Technology and Applied Science. The NCFL gives researchers across the University access to advanced instrumentation including state-of-the-art electron microscopes, optical microscopes, and several spectroscopic techniques.

The development of the protective surface coating began more than a year ago, when the coronavirus pandemic was in its early stages. Working on a team that included another doctoral student, Saeed Behzadinasab, the researchers’ goal was to find a way to prevent the spread of COVID-19 via contaminated surfaces. The coating they produced can successfully inactivate the virus (SARS-CoV-2) when it lands on a solid surface, so that when a person later touches the surface, the virus is unable to infect them.

In studying how their surface coating behaves and performs, the researchers captured images of it at the micro scale. Hosseini explained, “The NNCI contest invitation motivated me to select one of the scanning electron microscope images of my coatings, and edit it according to the contest’s criteria. My brain was filled with ideas since I had recently designed a front cover that was awarded to our paper published in ACS Biomaterials Science & Engineering. I came up with a lotus idea in minutes and that worked very well.”

Interestingly, the researchers had originally developed a brown coating that showed a great deal of promise. However, after conducting tests with consumers, it became clear that the public would be more likely to use a coating that was clear, instead of brown. Ducker’s research group was inspired to produce another coating, which this time would be transparent. As Hosseini put it, “It’s ironic that the invisible coating ended up being the subject of visual art, and even got an award for it.”

Ducker and Hosseini teamed up with Joseph Falkinham and Myra Williams from the Department of Biological Sciences to test the coating on a variety of other illness-causing microorganisms. It proved particularly effective against several bacteria including MRSA, a troublesome antibiotic-resistant bacterium that plagues hospitals.

With its transparent appearance and its broad antimicrobial effectiveness, the coating is now a strong candidate for commercialization. Indeed, Ducker has founded a company dedicated to pursuing the production of this surface coating on a larger scale.

Hosseini and Ducker are proud to have their image shared with the national nanoscience community. The recognition shows an appreciation for their hard work, in addition to their whimsical perspective. According to NanoEarth assistant director Tonya Pruitt, “Virginia Tech has had some excellent submissions to the NNCI image contest over the years, but this is the first year we’ve had a winner!”