Standard chemotherapies may efficiently kill cancer cells, but they also pose significant risks to healthy cells, resulting in secondary illness and a diminished quality of life for patients. To prevent the previously unavoidable damage, researchers, led by Penn State, have developed a new class of nanomaterials engineered to capture chemotherapy drugs before they interact with healthy tissue.

“To reduce the off-target effects of cancer drugs during and after localized chemotherapy, eliminating their systemic circulation is necessary,” said principal investigator Amir Sheikhi, assistant professor of chemical engineering and biomedical engineering at Penn State. “Available and proposed platforms to remove unwanted drugs — primarily the chemotherapy drug doxorubicin (DOX) — from blood are exceedingly ineffective, failing to remove enough of the drug to prevent damage. We have developed a highly efficient approach that captures DOX at a capacity more than 3,200% higher than other platforms, such as DNA-based materials.”

The method, now available online prior to the March issue of Materials Today Chemistry, is based on hairy cellulose nanocrystals — nanoparticles developed from the main component of plant cell walls and engineered to have immense numbers of polymer chain “hairs” extending from each end. These hairs increase the potential drug capture capacity of the nanocrystals significantly beyond that of conventional nanoparticles and ion exchange resins, according to Sheikhi. 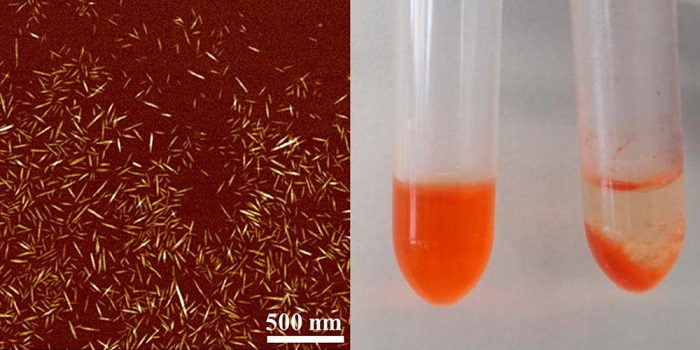 A multi-institute research team engineered specialized hairy cellulose nanocrystals, left, developed from the main component of plant cell walls and used in a variety of materials, including paper, to capture off-target chemotherapy drugs to prevent tissue damage, right. Both tubes contain human blood serum and a common chemotherapy drug. The right tube also contains the nanocrystals, which captured the drug, separating it from the blood serum.

“To the best of our knowledge, there is currently no nanoparticle-based super-capacity drug capture system,” Sheikhi said, noting that the development of such a system could have significant impact on cancer treatment plans. “For some organs, like the liver, chemotherapy can be locally administered through catheters. If we could place a device based on the nanocrystals to capture the excess drugs exiting the liver’s inferior vena cava, a major blood vessel, clinicians could potentially administer higher doses of chemotherapy to kill the cancer more quickly without worry about damaging healthy cells. Once the treatment is finished, the device could be removed.”

To produce the hairy cellulose nanocrystals capable of capturing chemotherapy drugs, the researchers chemically treated cellulose fibers found in softwood pulp and imparted a negative charge on the hairs, making them stable against the ionic composition of blood. According to Sheikhi, this corrects a fault of conventional nanoparticles, whose charge can be rendered inert or reduced when exposed to blood, limiting the number of positively charged drug molecules it can bind with to insignificant numbers.

The nanocrystals’ binding efficacy was tested in human serum, the protein-rich portion of blood that does not contain red or white blood cells or platelets. For every gram of hairy cellulose nanocrystals, more than 6,000 milligrams of DOX were effectively removed from the serum.

“The hairy nanocrystals allowed us to push the limit by at least two-to-three orders of magnitude compared to some other available platforms,” Sheikhi said.

The researchers also found that the nanocrystals had no harmful effect on red blood cells in whole blood or on cell growth in human umbilical vein endothelial cells.

“We found that the hairy cellulose nanocrystals bind to positively charged drugs in human serum and capture DOX immediately, and they do so without imposing any cytotoxicity or hemolytic effects,” Sheikhi said. “We envision that this effective, non-toxic nanoparticle could be a building block for the next generation of devices to capture excess drugs and remove unwanted molecules from the body, such as psychedelics and toxins.”

According to Sheikhi, the use of hairy cellulose nanocrystals has far-reaching implications beyond the body. His team recently engineered nanocrystals capable of selectively binding to neodymium, a rare earth element, to rescue valuable material from electronic waste.

“We’re excited to introduce a new material with such a high capacity to separate a variety of elements, which will hopefully open new opportunities for a broad range of applications,” Sheikhi said.