Physician researchers from UT Southwestern Medical Center have developed an innovative nanotherapeutic drug that prevents cancer from spreading to the liver in mice.

The new liver-specific microRNA drug, developed by a team led by Andrew Wang, M.D., is a promising candidate for drug companies that developed messenger RNA (mRNA) vaccines for COVID-19, because of similarities in these RNA agents.

“This might be one ray of hope that comes out of the pandemic,” said Dr. Wang, Professor, Radiation Oncology, and author of a rodent-based study published in the journal Cancer Research.

“It takes major funding and resources to develop nanoparticles that can deliver nucleic acids such as mRNA and miRNA. Before the development of COVID-19 vaccines, the cost was prohibitive. But now that several platforms have been developed and approved, these platforms/nanoparticles can be utilized for other applications such as what we developed in in mice models in my lab,” added Dr. Wang, Radiation Oncology’s Associate Vice Chair for Research, and member of the Harold C. Simmons Comprehensive Cancer Center. 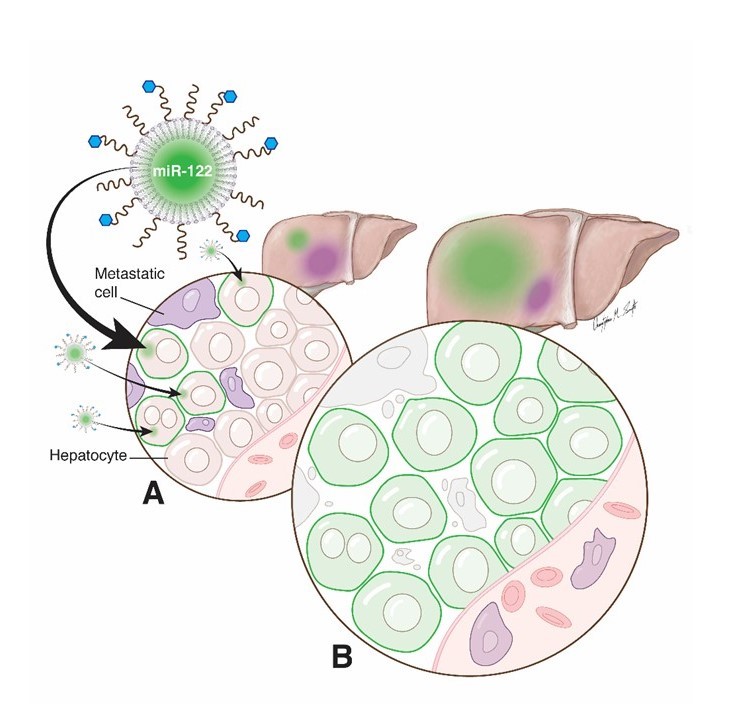 The engineered nanoparticle encapsulates miR-122 in the core and targets hepatocytes using Gal (blue dots). it delivers the miR-122 into hepatocytes which make them “healthier.”

The study drug’s core was made by complexing miR-122 with calcium phosphate, and lipids were wrapped around the core to make the nanoparticle. The drug delivers the miR-122 into hepatocytes, which make them “healthier” by helping prevent cancer cells from establishing themselves in the liver. Although the drug has only been tested in mice, it is a valued advance in the fight against cancer, as up to 70 percent of people with conditions like colorectal cancer eventually develop liver metastases.

“Liver metastases are second only to lung metastases, so new therapeutics in this area are an urgent need in oncology. Dr. Wang’s study is promising because it showed minimal toxicity,” said Carlos L. Arteaga, M.D., Director of the Harold C. Simmons Comprehensive Cancer Center, who holds The Lisa K. Simmons Distinguished Chair in Comprehensive Oncology.

Funding for the study and initial drug development was provided by National Cancer Institute/National Institutes of Health U54CA198999, NIH T32CA196589 and the University of North Carolina Research Opportunity Initiative.

Read the original article on The University of Texas Southwestern Medical Center.