Researchers at the Paul Scherrer Institute (PSI) and the University of Basel have developed a rapid test for Covid-19. Its novel functional principle promises reliable and quantifiable results concerning a patient's Covid-19 disease and its course – as well as evidence concerning other diseases and Covid variants that may be present. Before it can go into widespread use, however, it still must undergo further testing and optimisation. The researchers report on their development in the journal ACS Applied Nanomaterials.

A major shortcoming of rapid antigen tests – as demonstrated by a recent study by a research group led by Heinrich Scheiblauer of the German Paul Ehrlich Institute – is their lack of reliability. Of the 122 test kits from different manufacturers that were tested for the study, one-fifth failed and did not even meet the minimum requirement of identifying 75 percent of the test subjects carrying a high viral load as being coronavirus-positive. Another drawback: The tests only say whether the subject has the infection or not. They do not provide any insight into the course of the infection or the immune reaction of the test subjects.

Now a new test developed at PSI  – which, unlike antigen tests, does not directly detect components of the virus, but rather the antibodies the immune system produces in response to the infection –promises to bring substantially more predictive power to rapid testing. It is just as inexpensive, quick, and easy to use, and it can also be used to simultaneously identify a variety of pathogens, such as those responsible for the flu. "Thus, it also provides more data than previous rapid antibody tests that are used to determine whether someone has already had a coronavirus infection," says Yasin Ekinci, head of the Laboratory for X-ray Nanoscience and Technologies at PSI, who was responsible for the project to develop the new test. 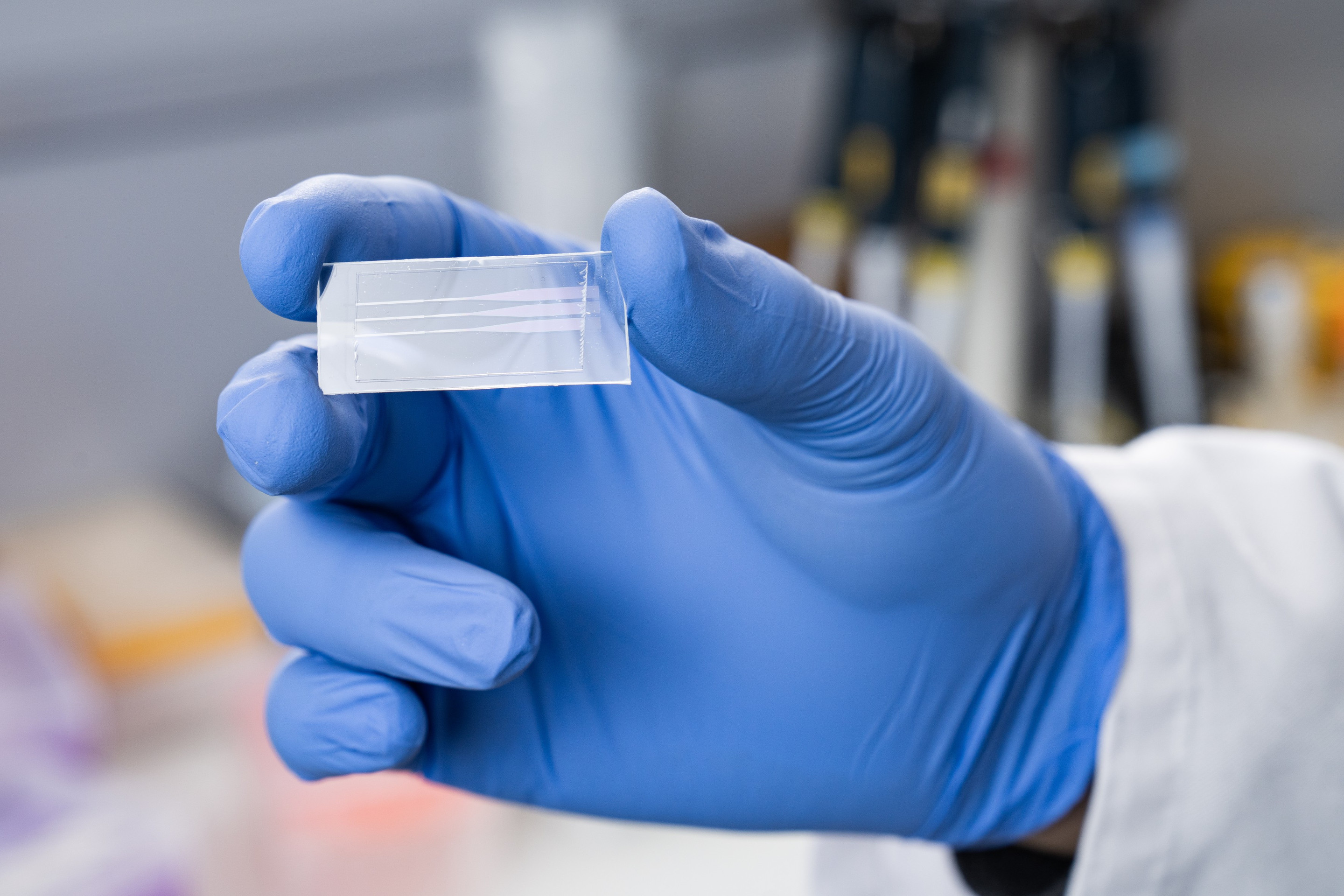 The test plates that make it possible to identify antibodies against various pathogens rapidly and reliably are similar to slides for conventional microscopes and are uncomplicated to use.

The central building block of the test is a small rectangular plate of ordinary Plexiglas, similar to a microscope slide. It consists of a lower layer which is one millimetre thick, and an upper layer with a thickness of  0.2 millimeters. The researchers patterned a relief in the lower part using electron beam lithography – an extremely precise process for milling solid materials used, for example, in the manufacturing of computer chips. Once the master template was produced in this way, the researchers combined this with so-called nanoimprint lithography, which significantly speeds up the fabrication process and reduces its cost.

With the thinner layer of Plexiglas as a cover, the plate now has three parallel channels through which a fluid can flow from one end to the other. Each of these is 300 micrometres (0.3 millimetre) wide and 3.4 micrometre high at the inlet. At the outlet, the channels are five times as wide but only one micrometre high. Along a stretch in between, the channel narrows to just a few micrometres wide, and at one point it is only 0.8 micrometre high — roughly 100 times thinner than human hair.

"This special channel structure serves several purposes at once," says Thomas Mortelmans, a doctoral candidate at the Swiss Nanoscience Institute of the University of Basel and first author of the study. Mortelmans carried out his research at PSI’s Laboratory for X-ray Nanoscience and Technologies. For one thing, it ensures a strong capillary effect, like the familiar action of the conduit tissues that transport water from the roots to the crowns of trees. No pump is required. The force results from the interfacial tension between the liquid and the solid surface. It virtually sucks the water through the narrow passages. Precisely the same thing happens with the channels in the Plexiglas – except that instead of water, a droplet of blood flows through it.

What is crucial for the test is a passage in which the height of the channel drops from 3.4 micrometres to 0.8. In what the researchers call the capture region, particles previously added to the blood get stuck at predefined locations – depending on which pathogens are present in the blood. For the test, Mortelmans explains, a subject would go to a doctor or a test centre. There, a little drop of blood is taken with a prick of the finger, as in a blood sugar test. A liquid in which special artificial nanoparticles are suspended is mixed into the blood. Their surface has the same structure as the notorious spike proteins of the Sars-CoV-2 virus, which human antibodies dock to when fighting the disease. In addition, small fluorescent particles are added that attach themselves to Sars-CoV-2 antibodies in humans.

This means that if there are antibodies against Sars-CoV-2 in the blood being tested, the fluorescent particles first attach themselves to them; together they then bind to the virus-like structures of the significantly larger nanoparticles and get stuck, along with them, in the predefined places corresponding to the diameter of the nanoparticles. "That is where the channel is exactly 2.8 micrometres high," says Mortelmans. Here the nanoparticles accumulate, with the human antibodies and their glowing appendages docked to them. If the plate is placed under a fluorescence microscope, the light signal is visible. The more antibodies the patient has formed, the brighter it is; the clearer the signal, the stronger the immune reaction. This is how Covid-19 can be clearly diagnosed. "In addition, you can use the signal strength to see whether the immune system is reacting well and a mild course can be expected – or whether it might be overreacting, meaning there is a risk of complications," explains Mortelmans.

One rapid test with many possibilities

There is no risk of the channel becoming blocked by other particles in the blood. The viruses themselves are only around 0.12 micrometre in size and flow through without resistance. Only the red blood cells next to the nanoparticles are larger than the narrowest part of the channel. "At the beginning of our development project, they actually caused problems," says Mortelmans. "But we have optimized the channel so that they now slip through." The researchers took advantage of the fact that the cells are flexible and compressible: "The capillary force is now so great that it squeezes the blood cells through every narrowing of the channel."

The test opens up even more possibilities beyond diagnosing Covid-19. In addition, nanoparticles of different sizes and with different surface structures could be mixed into the blood to enable simultaneous testing for other diseases. In the study, Mortelmans did this using particles whose surface corresponds to influenza A viruses. In the experiments, two spots in the capture region lit up: one for Covid-19 and one for the flu.

In addition, it is possible to identify different antibodies that the immune system produces in different stages of the disease. For example, one could use green fluorescent particles that only attach to antibodies that appear in the early phase of the infection, and red fluorescent particles for antibodies that are produced by the immune system at later stages. "The test can be extended in many ways," says Mortelmans. "We could, for example, test ten different diseases at once without any problems and use four colors as well." Of course, the number of channels could also be increased to test even more variants. In principle, the second and third channels are only there to confirm the result of the first. However, they could also be used to carry out different tests. "In principle, we have a system here similar to Lego, in which you can combine different components," says project manager Yasin Ekinci.

The researchers began their work on the new test shortly after the start of the coronavirus pandemic. "We were working on a diagnostic test for Parkinson's at the time," says Ekinci. "When the pandemic took hold, we asked ourselves how we, as a research institute, could contribute to overcoming it." However, the development took longer because the test is so novel, because little was known about the virus at the beginning, and because patient samples were also difficult to obtain.

For the study, the device was tested with 29 blood samples – 19 of which came from infected people and 10 from non-infected people. With the exception of one false-negative case, the test was always correct. This too was identified during the follow-up test. "Of course we need to do a lot more testing to make a solid statement about reliability, and there's still a lot of room for improvement. But it is very promising," says Ekinci.

In addition, the test should become even easier to carry out. "We're working on making it just as easy to do with saliva instead of blood," Mortelmans reports. "We also want to be able to use a mobile phone camera instead of a microscope to read the signals. Modern devices are now capable of doing this." Such a test currently takes between 10 and 30 minutes. But it also be possible to do it in two minutes; it is currently being optimised with that aim. "Our vision is a technology," says Ekinci, "with which we can simultaneously diagnose several diseases and variants of Covid and flu reliably, quickly, and inexpensively via mobile phone. Our novel concept is capable of making this a reality."