Tufts researchers are building a reputation for precision targeting in drug delivery. Their tools: tiny lipid-based nanoparticles (LNPs) fine-tuned to latch on to specific tissues, organs, even cell types within the body. Their latest creation: LNPs that carry genetic instructions directly into the lungs.

Even if you haven’t heard of LNPs before, you may have already had an injection with them recently—LNP delivery had its first blockbuster debut in the two mRNA-based major COVID-19 vaccines.

The Tufts engineering team has taken the existing LNP technology and engineered it to be applicable to a much broad range of diseases by targeting it to specific tissues and organs, which helps minimize toxic effects on other, healthy parts of the body.

In a study published in the Proceedings of the National Academy of Sciences, the team led by Qiaobing Xu, a  professor of biomedical engineering, packed the LNPs with mRNA—the same genetic material used in two COVID-19 vaccines, but this time coding for a normal gene, Tsc2, that is mutated in individuals with a rare disease called lymphangioleiomyomatosis (LAM).

The mutated Tsc2 causes smooth muscle tissue to grow out of control, creating cysts that look like large gaps or holes in the lungs on an X-ray or CT scan. In a mouse model of LAM, delivering a normal Tsc2 gene directly to the lungs led to a significant reduction in cysts.

“The effect was quite impressive,” said Xu, who worked with collaborators from Harvard Medical School and the University of Massachusetts, Boston. “The mRNA-packed LNPs could be a promising intervention for this awful disease, and we hope to carry it further into clinical trials.” 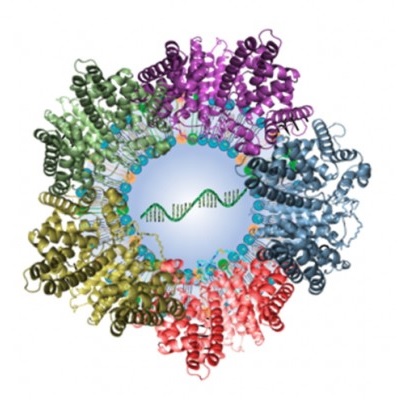 Illustration of a lipid nanoparticle surrounded by plasma proteins.

The remarkable achievement follows on earlier groundbreaking research, in which Xu and his team created LNPs that carry gene-editing packages into cells of the immune system or the liver or even across the blood brain barrier to specific regions of the brain.

The current study does not involve gene editing, which splices out a bad gene and replaces it with a good one. In this case, it’s more like overwriting the bad gene that’s still there with a temporary code (the mRNA) that fades over time, requiring repeat doses. The researchers wondered if it would be possible to try more lasting gene editing approach to LAM.

“We were able to demonstrate that we could deliver gene editing to the lungs, but it showed up in the liver as well,” said Min Qiu, former postdoctoral researcher in the Xu group at Tufts and now a principal investigator at Fudan University in China and co-first author of the study.

“The size and components of the gene-editing kit may have affected the LNPs’ ability to selectively target the lungs in this case,” he said. “Delivering the smaller mRNA package is a lot more selective.” The team is currently working on refining the LNPs to enable more targeted gene editing to the lungs.

How to Target the Lungs

The LNPs are essentially tiny bubbles of fat (lipid) and other molecules. Like the mRNA, the LNPs were also used in two of the major vaccines approved for protection against COVID-19. The twist added by the Tufts researchers to get the LNPs to home in on a specific organ like the lungs comes from how they modify the lipids and other molecules making up the tiny bubbles.

The bubbles are formed with a bilayer of lipids, which encircle the contents. Every lipid can be described as having chemical parts. There’s a head that points to a watery environment—either to the outside, or the inside of the bubble where the mRNA or gene-editing kit is packed; a tail that points to the middle of the bilayer; and a linker between the two. Changing any of those parts can change where the LNPs might end up in the body.

By testing many combinations of heads, tail,s and linkers, as well as other components of the LNPs such as cholesterol or polyethylene glycol, the researchers have been able to target not only the brain or immune system, but also the spleen, liver, and even specific cell types.

The two leading lung-targeting LNPs both had linkers containing a nitrogen atom, which seemed to be key for targeting to the lungs.

“We found out that the molecules making up the LNPs would pick up proteins and other molecules from the plasma, and it is that ‘crown’ of material that interacts with the target tissue, organ or cell,” said Xu.

By analyzing which plasma proteins stuck to the LNPs, the researchers narrowed down to fourteen proteins as possibly having a role in helping them to stick to and absorb into the lungs, including ApoE, albumin, fibrinogen beta, and fibrinogen gamma.

“It does become a trial and error process to find the right targeting combination, but we can definitely find that combination within a time frame needed for discovering treatments of a wide range of diseases.”