A major challenge in cancer therapy is selectively targeting cancer cells over healthy ones. A recent study by the Locher group (IMBB) describes the development of camelid single-​domain antibodies (nanobodies) that selectively deliver cargo to cells by hijacking the cellular vitamin B12 uptake pathway which is high in demand in cancer cells.

In human cells, vitamin B12 is transported through the blood by the soluble carrier protein transcobalamin (TC). Cells that require B12 express the cell surface receptor protein TCblR (also known as CD320) which binds to transcobalamin and subsequently takes it up via endocytosis. As B12 is important for DNA synthesis, TCblR is also overexpressed in some cancer cell lines. This makes the TC–TCblR mediated uptake route of B12 a promising target for cancer imaging and therapy. 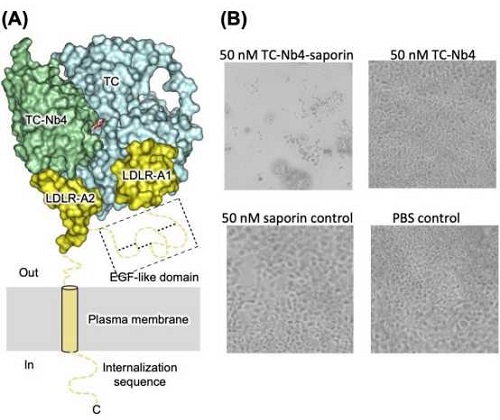 In a recent study, Joël S. Bloch et al describe how they generated a set of alpaca-​derived single-​chain antibodies (nanobodies) of which some bind to TC and one of them (named TC-​Nb4) specifically binds to the formed complex of TC and TCblR. Using fluorescence microscopy, they show that in cultured human cells TC-​Nb4 can enter cells by hijacking the TC–TCblR pathway. To capitalize on this behavior, they then generated nanobody-​drug conjugates and could demonstrate that some of their nanobodies were effective in delivering toxic cargo (saporin) into human cells.

Therefore, these nanobodies, in particular TC-​Nb4, might be useful for the development of reagents for cancer imaging and for targeted chemotherapy. Bloch et al complement their studies with biochemical and X-​ray crystallographic studies which allowed them to elucidate the precise binding modes of the nanobodies, which also provide novel structural insight into the binding to TC to TCblR.