The graphene/FePd is expected to act as a recording layer in the future X nm generation of magnetic random-access memory. The results were published on February 28 in ACS Nano.

The project saw Tohoku University work in collaboration with Université Paris-Saclay and Kobe University under the Japan Society for the Promotion of Science (JSPS) core-to-core project as well as the Tokyo Institute of Technology, Waseda University, CNRS/Thales, and High Energy Accelerator Research Organization. CIES Director Tetsuo Endoh served as the project leader.

The state-of-the-art MRAM recording layer, with an IPMA in CoFeB/MgO interface, has already achieved up to the 1X nm generation magnetic tunnel junctions (MTJs) for magnetic random-access memory (MRAM) applications. However, further innovation was needed in the X nm generation MTJs to improve retention characteristics.

Professors Pierre Seneor from the Université Paris-Saclay and Hiroshi Naganuma from CIES unveiled the performance of graphene/FePd bilayer recording layer as one of the candidates for the next X nm generation MTJs for MRAM.

The sample was fabricated by a chemical vapor deposition (CVD) method for hexagonal graphene (Gr) on a tetragonal FePd epitaxial film which was grown by r.f. magnetron sputtering. As shown in the scanning tunneling electron microscopy (STEM) images in fig. 1, the FePd is alternately arranged between Fe and Pd in the vertical direction. This means the FePd has a high degree of L10-ordering.

The atomic relationship of Gr/L10-FePd, which possess an energetically stable interface, purports theoretically [Fig. 1(b) and 1(c)] and experimentally [Fig. 1(a)] that the Gr armchair axis parallels the FePd [100]L10. The Gr also underwent a slight strain by chemical bonding. Focusing on interatomic distance between the Gr and the FePd layers, the research group theoretically and experimentally determined it to be approximately 0.2 nm. The shorter distance between graphene and L10-FePd layers can be explained by the chemisorption-type vdW force having a strong orbital hybridization. 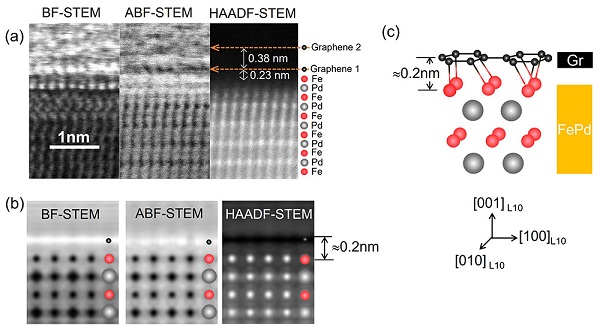 (a) Experimental setup for fluorescence-yield depth-resolved X-ray absorption (XAS) and X-ray magnetic circular dichroism (XMCD). Fluorescence X-ray emitted after XAS was acquired separately at different detection angles θd on CCD device. Lowest θd was determined to be ~0.1°. Magnetic field was tilted by rotations θi and θis of 90° and 30°, respectively, implying that magnetic field of 0.87 T was applied out-of-plane and rotated 30° from in-plane direction. (b) Fe L3- and L2-edge spectra with different λ ranging from 0.25 to 2.5 nm for θi = 90°. A magnetic field was applied out-of-plane direction (θi = 90°) depth profile of XMCD spectrum obtained based on differences in circular polarized XAS. The XAS and XMCD spectra at (c) interface and (d) inner layer.

Finally, the potential of the MRAM's X nm generation suitability was calculated by micromagnetic simulation. The IPMA in Gr/L10-FePd is useful because it can be incorporated into the large bulk perpendicular magnetic anisotropy (PMA) of L10-FePd. Then a micromagnetic simulation can assume both the PMA and IPMA. It is predicted that p-MTJs using Gr/L10-FePd can realize 10-year data retention in an extremely small recording layer with a circular diameter and thickness of 10 and 2 nm, respectively.