Imagine millions of soapy sponges the size of human cells that can clean water by soaking up contaminants. This simplistic model is used to describe technology that MIT chemical engineers have recently developed to remove micropollutants from water — a concerning, worldwide problem. 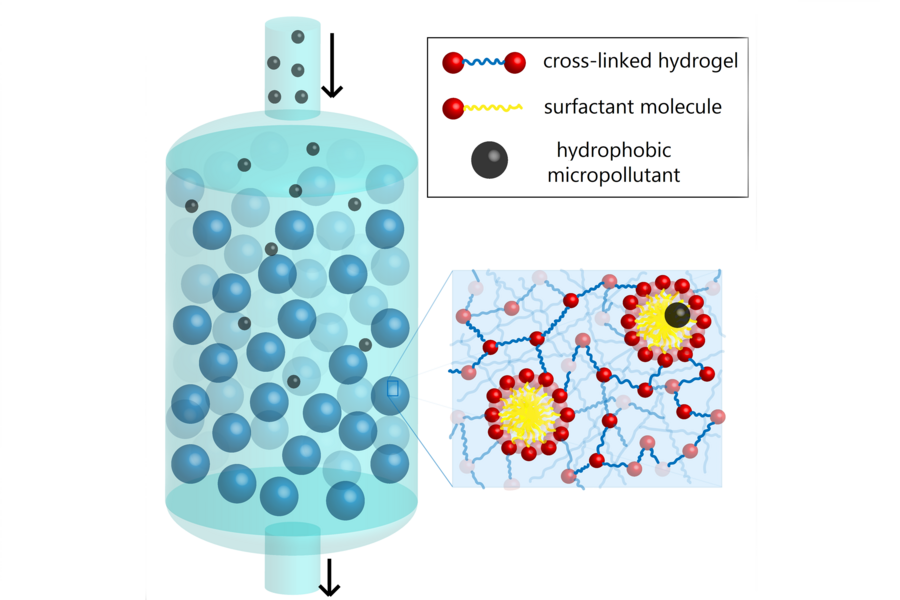 Schematic diagram of micelle-laden hydrogel particles in a packed bed for the removal of micropollutants.

In spite of their low concentrations (about 0.01–100 micrograms per liter), micropollutants can be hazardous to the ecosystem and to human health. They come from a variety of sources and have been detected in almost all bodies of water, says Gokhale. Pharmaceuticals passing through people and animals, for example, can end up as micropollutants in the water supply. Others, like endocrine disruptor bisphenol A (BPA), can leach from plastics during industrial manufacturing. Pesticides, dyes, petrochemicals, and per-and polyfluoroalkyl substances, more commonly known as PFAS, are also examples of micropollutants, as are some heavy metals like lead and arsenic. These are just some of the kinds of micropollutants, all of which can be toxic to humans and animals over time, potentially causing cancer, organ damage, developmental defects, or other adverse effects.

Micropollutants are numerous but since their collective mass is small, they are difficult to remove from water. Currently, the most common practice for removing micropollutants from water is activated carbon adsorption. In this process, water passes through a carbon filter, removing only 30 percent of micropollutants. Activated carbon requires high temperatures to produce and regenerate, requiring specialized equipment and consuming large amounts of energy. Reverse osmosis can also be used to remove micropollutants from water; however, “it doesn't lead to good elimination of this class of molecules, because of both their concentration and their molecular structure,” explains Doyle.

When devising their solution for how to remove micropollutants from water, the MIT researchers were inspired by a common household cleaning supply — soap. Soap cleans everything from our hands and bodies to dirty dishes to clothes, so perhaps the chemistry of soap could also be applied to sanitizing water. Soap has molecules called surfactants which have both hydrophobic (water-hating) and hydrophilic (water-loving) components. When water comes in contact with soap, the hydrophobic parts of the surfactant stick together, assembling into spherical structures called micelles with the hydrophobic portions of the molecules in the interior. The hydrophobic micelle cores trap and help carry away oily substances like dirt.

Doyle’s lab synthesized micelle-laden hydrogel particles to essentially cleanse water. Gokhale explains that they used microfluidics which “involve processing fluids on very small, micron-like scales” to generate uniform polymeric hydrogel particles continuously and reproducibly. These hydrogels, which are porous and absorbent, incorporate a surfactant, a photoinitiator (a molecule that creates reactive species), and a cross-linking agent known as PEGDA. The surfactant assembles into micelles that are chemically bonded to the hydrogel using ultraviolet light. When water flows through this micro-particle system, micropollutants latch onto the micelles and separate from the water. The physical interaction used in the system is strong enough to pull micropollutants from water, but weak enough that the hydrogel particles can be separated from the micropollutants, restabilized, and reused. Lab testing shows that both the speed and extent of pollutant removal increase when the amount of surfactant incorporated into the hydrogels is increased.

“We've shown that in terms of rate of pullout, which is what really matters when you scale this up for industrial use, that with our initial format, we can already outperform the activated carbon,” says Doyle. “We can actually regenerate these particles very easily at room temperature. Nearly 10 regeneration cycles with minimal change in performance,” he adds.

Regeneration of the particles occurs by soaking the micelles in 90 percent ethanol, whereby “all the pollutants just come out of the particles and back into the ethanol” says Gokhale. Ethanol is biosafe at low concentrations, inexpensive, and combustible, allowing for safe and economically feasible disposal. The recycling of the hydrogel particles makes this technology sustainable, which is a large advantage over activated carbon. The hydrogels can also be tuned to any hydrophobic micropollutant, making this system a novel, flexible approach to water purification.

The team experimented in the lab using 2-naphthol, a micropollutant that is an organic pollutant of concern and known to be difficult to remove by using conventional water filtration methods. They hope to continue testing with real water samples.

“Right now, we spike one micropollutant into pure lab water. We'd like to get water samples from the natural environment, that we can study and look at experimentally,” says Doyle.

By using microfluidics to increase particle production, Doyle and his lab plan to make household-scale filters. They then anticipate scaling up to municipal water treatment or even industrial wastewater treatment.

The lab recently filed an international patent application for their hydrogel technology that uses immobilized micelles. They plan to continue this work by experimenting with different kinds of hydrogels for the removal of heavy metal contaminants like lead from water.

Funded by a 2019 J-WAFS seed grant that is currently ongoing, this research has the potential to improve the speed, precision, efficiency, and environmental sustainability of water purification systems across the world.

“I always wanted to do work which had a social impact, and I was also always interested in water, because I think it's really cool,” says Gokhale. He notes, “it's really interesting how water sort of fits into different kinds of fields … we have to consider the cultures of peoples, how we're going to use this, and then just the equity of these water processes.” Originally from India, Gokhale says he’s seen places that have barely any water at all and others that have floods year after year. “There's a lot of interesting work to be done, and I think it's work in this area that’s really going to impact a lot of people's lives in years to come,” Gokhale says.

Doyle adds, “water is the most important thing, perhaps for the next decades to come, so it's very fulfilling to work on something that is so important to the whole world.”