Chemists have developed a nano-scale structure that combines copper, gold and silver to work as a superior catalyst in a chemical reaction whose improved performance will be essential if carbon capture and utilization efforts are to succeed in helping to mitigate global warming.

A study describing the process appeared in the journal Nano Research on Mar. 15.

In the face of the climate change challenge, in recent years, policy-makers have increasingly focused on carbon-capture-and-utilization (CCU), wherein CO2 is drawn down from the atmosphere and then used as a feedstock for industrial chemicals (such as carbon monoxide, formic acid, ethylene, and ethanol) or for the production of carbon-neutral synthetic fuels (especially useful for hard-to-electrify transport sectors such as long-haul aviation and shipping). So long as the latter process is powered by clean electricity, it also offers a way to store renewable energy over the long term—the holy grail of overcoming the intermittency of energy options such as wind and solar power. 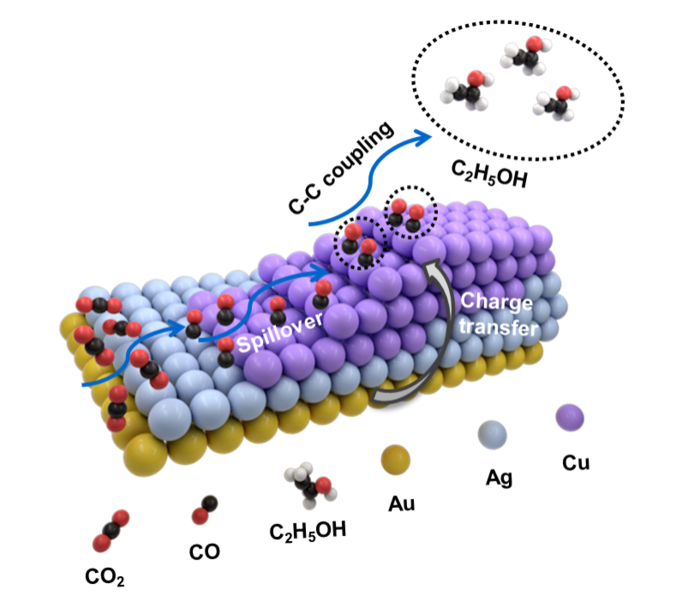 One possible means of doing all this is via a chemical reaction called the electrochemical CO2 reduction reaction (eCO2RR, or simply ECR). This uses electricity to power the conversion of the gas into other usable substances by separating CO2’s carbon atoms from its oxygen atoms. Water can also provide hydrogen “donors” in some varieties of ECR whereby the carbon atoms are combined with hydrogen to produce various species of hydrocarbons or alcohols.

Key to ECR is using the right catalyst, or chemical substance whose structure and charge enables it to kick off or speed up a chemical reaction. Various different metals have been used as catalysts depending on which end product is desired. Catalysts employing just one type of metal include tin to produce formic acid, silver for carbon monoxide (CO), and copper for methane, ethylene or ethanol.

However, the performance of the process can be limited when ECR competes with the tendency of hydrogen atoms within the electrochemical splitting of water to pair up with themselves instead of joining up with the carbon atoms. This competition can lead to production (or “selection”) of a different chemical end product than the one desired. As a result, chemists have long been on the hunt for catalysts with high “selectivity”.

Recently, instead of just using a single metal as a catalyst, researchers have turned to the use of heterostructures that incorporate two distinct materials whose combined properties produce different or superior outcomes to either of the individual materials on their own.

Some of the heterostructures that have been tested for ECR include combining silver and palladium in a branchlike formation (AgPd “nanodentrites”), and various other combinations of two metals in sandwich-like, tube-like, pyramidal and other shapes. Researchers have enjoyed considerable success with bimetallic heterostructures that include copper—which is very good at converting CO2 into products that use two carbon atoms. These bimetallic heterostructures include silver-copper (AgCu), zinc-copper (ZnCu), and gold-copper (AuCu), with the latter enjoying particular selectivity success for methane, C2 and carbon monoxide.

“We thought if two metals were producing good results, then perhaps three metals would be even better,” said Zhicheng Zhang, a nanochemist with Tianjin University and co-author of the study.

So the researchers constructed a trimetallic nanostructure that combined gold, silver and copper and was asymmetric in form. The shape and precise ratio of the three metals can be altered via a growth method involving multiple steps. Specifically, gold “nanopyramids” are first synthesized and used as “seeds” for subsequent growth of various trimetallic structures involving different ratios of the three metals.

They found as a result of the unique form of their heterostructure design and by altering the ratios of these three metals, they could carefully tune the selectivity toward different C2-based products. Production of ethanol (C2H6O) in particular was maximized by using a heterostructure with the feeding ratio involving one atom each of gold and silver combined with five copper atoms.