An Improved Ink for Colon Tattoos

The colon might be the last place people would consider getting a tattoo, but endoscopic tattooing is an important medical technique for marking colorectal lesions for surgery or follow-up. Today, scientists report a next-generation ink for these markings that diffuses less and is more biocompatible than existing inks. The new formulation could make it easier to identify and remove complex colonic polyps and tumors, the researchers say.

They will present their results today at the spring meeting of the American Chemical Society (ACS). ACS Spring 2022 is a hybrid meeting being held virtually and in-person March 20-24, with on-demand access available March 21-April 8. The meeting features more than 12,000 presentations on a wide range of science topics.

According to the American Cancer Society, colorectal cancer is the third most diagnosed cancer in the U.S. and the second leading cause of cancer-related death. March is colorectal cancer awareness month, when people older than 50 are reminded to get a colonoscopy, or endoscopic examination of the colon, to detect cancerous and pre-cancerous lesions. Small polyps can usually be removed at the time of colonoscopy; however, larger, complex lesions are often referred to specialists or surgeons for later removal. 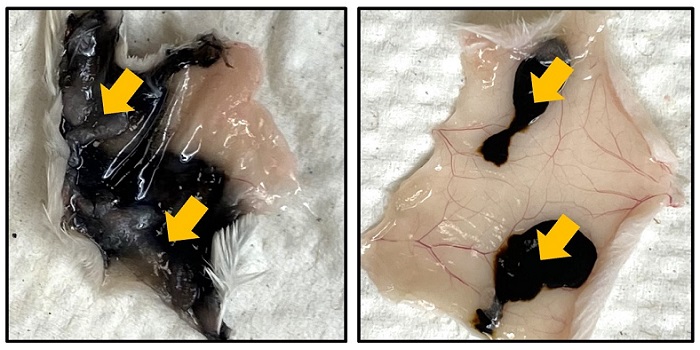 “Many times, these are very flat, very subtle lesions, and there’s a need to mark them so that the specialist going in later can find them,” says Rahul Pannala, M.D., a gastroenterologist and associate professor of medicine at the Mayo Clinic Arizona, who is involved in the research. To do this, doctors inject a commercial ink, typically made of carbon black, a couple of centimeters from the lesion — a process known as endoscopic or colon tattooing. “The commercially available inks have high contrast, but once they are injected, they rapidly diffuse around the area of the spot,” explains Subhadeep Dutta, a graduate student at Arizona State University who is presenting the work at the meeting. “So, the specialist can be lost as to where to find the lesion.” Also, some inks can trigger inflammation or diffuse into other tissues, possibly causing side effects.

Therefore, Dutta; Pannala; Jordan Yaron, Ph.D.; and Kaushal Rege, Ph.D. (the project’s principal investigator, at Arizona State University), wanted to develop a new type of colon tattoo ink that could overcome these limitations. To give the ink a strong, dark color that would be easy to see under the visible light of a colonoscopy, the researchers chose metal-derived nanoparticles. They combined the nanoparticles with different amounts and types of polymers that adhere to the submucosal surface in the colon, preventing the ink from diffusing.

They tested the various formulations, first in dissected pig intestines and then in living mice. Because mouse intestines are so tiny and difficult to work with, the researchers injected their inks under the mice’s skin as a model system to gauge diffusion, inflammation and imaging efficacy. “From our preclinical studies so far, the contrast is looking good, and our ink spots are really concentrated. At 28 days, they’re at least three to four times smaller than the spots from the commercial dye,” Dutta says. Although there are no obvious signs of inflammation, the team is now performing histopathological studies to observe whether any microscopic changes occur in the skin and to help determine the optimal ink formulation. The team is also preparing to test the best inks in actual endoscopic tattoos of live pigs.

Another advantage of the nanoparticles is that, unlike commercial inks, they should be visible in X-ray computed tomography (CT) imaging, although the researchers haven’t tested this yet. “Because the nanoparticles have X-ray CT contrast properties, as well as being visible under endoscopic light, we think the new inks could allow multi-modal imaging,” Rege says. That might help doctors better characterize a lesion before surgery.

If the tattoo ink proves superior to existing formulations, the researchers say that it could translate to better patient care. “It could lead to safer removal of complex polyps and tumors, and to better identification in imaging scans,” says Pannala. “And it’s not limited to just colon cancer. If we’re able to develop an ink that is very precise, we could also use it to mark growths and tumors anywhere in the gut, or even in the pancreas.”