One-dimensional semiconductor nanowires with strong quantum confinement effect, i.e. quantum wires (QWs), are of great interest for applications in advanced optoelectronics and photochemical conversions. Beyond the state-of-the-art Cd-containing ones, ZnSe QWs, as a representative heavy-metal-free semiconductor, have shown the utmost potential for next-generation environmental-friendly applications.

Unfortunately, ZnSe nanowires produced yet are largely limited to the strong quantum confinement regime with near-violet-light absorption or to the bulk regime with undiscernible exciton features. Simultaneous, on-demand, and high-precision manipulations on their radial and axial sizes – that allows strong quantum confinement in the blue-light region – has so far been challenging, which substantially impedes their further applications. 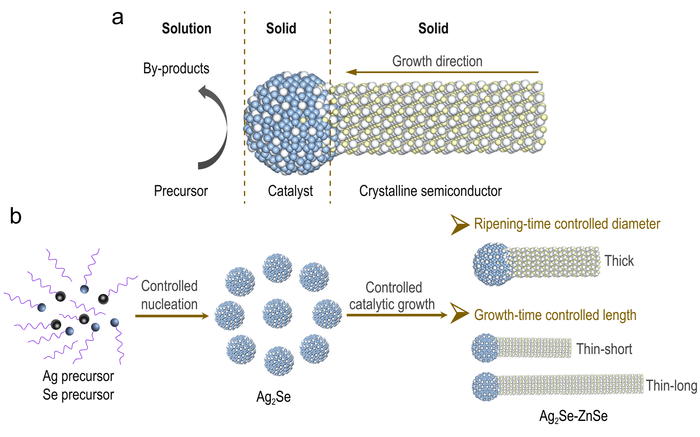 (a) The solution-solid-solid growth mechanism. (b) Two-step catalyzed growth for independent radial and axial size control of ZnSe QWs.

In a new article published in the National Science Review, a research team led by professor YU Shuhong at University of Science and Technology of China (USTC) has reported the on-demand synthesis of high-quality, blue-light-active ZnSe QWs by developing a flexible synthetic approach – a two-step catalytic growth strategy that enables independent, high-precision, and wide-range controls over the diameter and length of ZnSe QWs. In this way, they bridge the gap between prior magic-sized ZnSe QWs and bulk-like ZnSe nanowires.

The researchers found that a new epitaxial orientation between the cubic-phase catalyst tips and wurtzite ZnSe QWs kinetically favors the formation of ultrathin, stacking-fault free QWs. The strong quantum confinement, high-degree size control, and the absence of mixed phases together lead to their well-defined, ultranarrow excitonic absorption in the blue-light region with full width at half maximum (FWHM) of sub-13 nm. After surface thiol passivation, they further eliminated the surface electron traps in these ZnSe QWs, resulting in long-lived charge carriers and high-efficiency solar-to-H2 conversion.

The two-step catalyzed growth strategy is believed to be general for a variety of colloidal nanowires. The access to those high-quality nanowires would thus offer a versatile material library for heavy-metal free applications in solar fuels and optoelectronics in the future.