New Mechanism to Transfer Chirality Between Molecules in The Nanoscale Field

If we compare the right to the left hand, we can see these are specular images —that is, like symmetrical shapes reflected in a mirror— and they cannot superimpose on each other. This property is chirality, a feature of the matter that plays with the symmetry of biological structures at different scales, from the DNA molecule to the tissues of the heart muscle.

Now, a new article published in the journal Nature Communications reveals a new mechanism to transfer the chirality between molecules in the nanoscale field, according to a study led by the UB lecturer Josep Puigmartí-Luis, from the Faculty of Chemistry and the Institute of Theoretical and Computational Chemistry (IQTC) of the UB.

Chirality: from fundamental particles to biomolecules

Chirality is an intrinsic property of matter that determines the biological activity of biomolecules. “Nature is asymmetric, it has a left and a right and can tell the difference between them. The biomolecules that build up the living matter —amino acids, sugars and lipids— are chiral: they are formed by chemically identical molecules that are the specular images to each other (enantiomers), a feature that provides different properties as active compounds (optical activity, pharmacological action, etc.)”, notes Josep Puigmartí-Luis, ICREA researcher and member of the Department of Materials Science and Physical Chemistry.

How to obtain chiral molecules through chemical reactions

Chirality control is decisive in the production of drugs, pesticides, aroma, flavours and other chemical compounds. Each enantiomer (molecule with a certain symmetry) has a certain activity which is different from the other chemically identical compound (its specular image). In many cases, the pharmacological activity of an enantiomer can be scarce, and in the worst scenario, it can be very toxic. “Therefore, chemists need to be able to make compounds as single enantiomers, which is called asymmetric synthesis”, says Puigmartí-Luis. 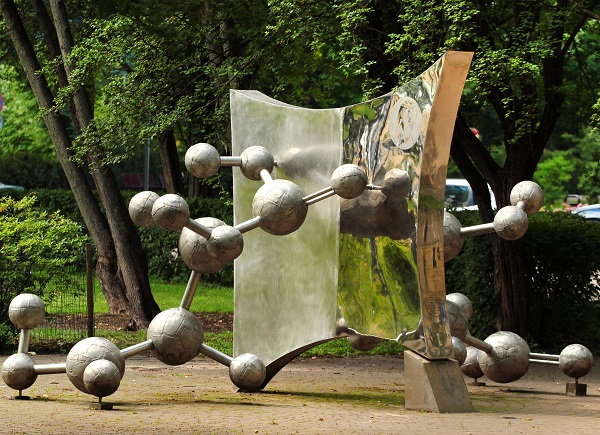 Chirality is an intrinsic property of matter that determines the biological activity of biomolecules.

There are several strategies to control the sign of chirality in chemical processes. For instance, using natural enantiopure compounds known as the chiral pool (for instance, amino acids, hydroxy acids, sugars) as precursors or reactants that can become a compound of interest after a series of chemical modifications. The chiral resolution is another option that enables separating enantiomers through the use of an enantiomerically pure resolving agent, and recover the compounds of interest as pure enantiomers. The use of chiral auxiliaries that help a substrate react in a diastereoselective way is another efficient methodology to obtain an enantiomerically pure product. Last, the asymmetric catalysis —based on the use of asymmetrical catalysers— is the top procedure to reach the asymmetrical synthesis. 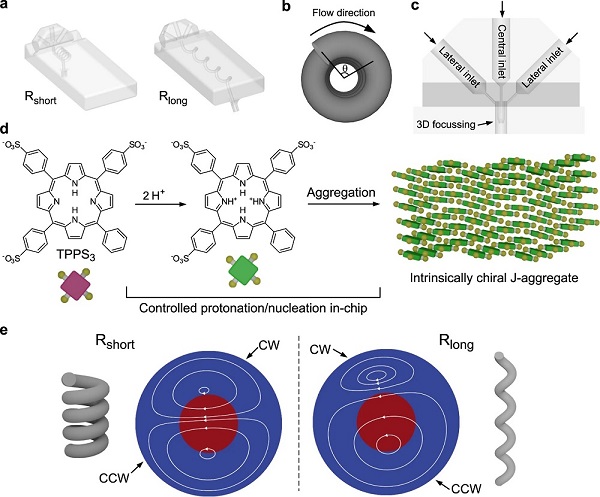 The new article describes how the modulation of the geometry of a helical reactor at a macroscopic level enables controlling the sign of chirality of a process at a nanometric scale.

“Every method described above has its own pros and cons”, notes Alessandro Sorrenti, member of the Section of Organic Chemistry of the University of Barcelona and collaborator in the study. “For instance, chiral resolution —the most widespread method for the industrial production of enantiomerically pure products— is intrinsically limited to 50% yield. The chiral pool is the most abundant source of enantiopure compounds but usually, there is only one enantiomer available. The chiral auxiliary method can offer high enantiomeric excesses but it requires additional synthetic phases to add and remove the auxiliary compound, as well as purification steps. Finally, chiral catalysers can be efficient and are only used in small amounts but they only work well for a relatively small number of reactions”.

“All the mentioned methods make use of enantiomerically pure compounds —in the form of resolving agents, auxiliaries or ligands for metal catalysers—, which ultimately derive direct or indirectly from natural sources. In other words, nature is the ultimate form of asymmetry”.

The new article describes how the modulation of the geometry of a helical reactor at a macroscopic level enables controlling the sign of chirality of a process at a nanometric scale, an unprecedented discovery to date in the scientific literature.

Also, the chirality is transferred top-down, with the manipulation of the helical tube to the molecular level, through the interaction of the hydrodynamics of asymmetric secondary flows and the spatiotemporal control of reagent concentration gradients.

“For this to work, we need to understand and characterize the transport phenomena occurring within the reactor, namely, the fluid dynamics and the mass transport, which determine the formation of reagent concentration fronts and the positioning of the reaction zone in regions of specific chirality”, notes Puigmartí-Luis.

In a helical channel, the flow is more complex than in a straight channel, since the curved walls generate centrifugal forces which result in the formation of secondary flows in the plane perpendicular to the direction the fluid (main flow). These secondary flows (vortices) have a dual function: they are opposed-chirality regions and build the necessary chiral environment for enantioselection. In addition, by advection within the device and for the development of reagent concentration gradients.

By modulating the geometry of the helical reactor at the macroscopic level, “it is possible to control the asymmetry of the secondary flows in such a way that the reaction zone, — the region where reagents meet at a suitable concentration for reacting— is exposed exclusively to one of the two vortices, and thus to a specific chirality. This mechanism of chirality transfer, based on the rational control of fluid flow and mass transport, enables ultimately to control enantioselection depending on the macroscopic chirality of the helical reactor, where the handedness of the helix determines the sense of the enantioselection”, says Puigmartí-Luis.

The findings shed light on new frontiers to achieve the enantioselection at a molecular level —without the use of enantiopure compounds— only by combining geometry and the working conditions of the fluid reactors. “Also, our study provides a new fundamental insight of the mechanisms underlying the chirality transfer, demonstrating that this intrinsic property of living matter is based on the interaction of physical and chemical restrictions acting synergistically across multiple length-scales”, concludes the lecturer Josep Puigmartí-Luis.