Researchers at UT Southwestern have developed a first-of-its-kind ultrasound-guided cancer immunotherapy platform that delivers immune-stimulating agents to cells for the development of systemic anti-tumor immunity.

The technology, termed Microbubble-assisted Ultrasound-guided Immunotherapy of Cancer (MUSIC), was described in a study published in Nature Nanotechnology.

The development of MUSIC within the Translational Research in Ultrasound Theranostics (TRUST) program at UTSW started with the idea that FDA-approved materials used for ultrasound imaging could be reengineered to deliver nucleic acids directly into cells. Key to this hypothesis were ultrasound contrast agents called microbubbles.

“When exposed to an ultrasound field, the microbubbles oscillate. If those microbubbles are bound to cells when exposed to a high enough ultrasound intensity, the oscillation will push and pull the cell membrane. This creates pores that open the door for delivery of microbubble cargo into the cells’ cytosol,” explained Jacques Lux, Ph.D., Assistant Professor of Radiology at UT Southwestern and co-corresponding author of the study.

Sina Khorsandi, a biomedical engineering graduate student working in the Lux lab and co-first author of the study, used antibodies to target the microbubbles to specific immune cells called antigen-presenting cells (APCs). The microbubbles were loaded with the cyclic dinucleotide cGAMP, the natural activator of STING. The delivery of this natural agent to an APC activates STING and enhances the body’s innate immune system, resulting in activation of T-cells that can target and eliminate tumor cells. 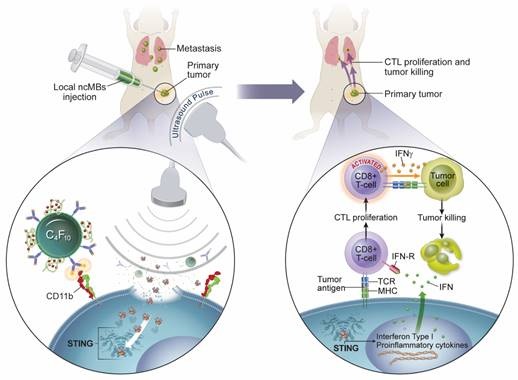 Researchers developed a microbubble-assisted ultrasound-guided immunotherapy to deliver an agent into antigen-presenting cells and enhance the body's innate immune system.

The researchers tested their MUSIC technology on triple-negative breast cancer mouse models and found a significant reduction in tumor growth, with 60% of the treated mice having complete tumor eradication. The treatment also produced anti-tumor memory in the T-cells that prevented tumor regrowth.

Using a metastatic breast cancer mouse model, the researchers found that local treatment of the primary tumor elicited a systemic immune response, as activated T-cells traveled to distant metastatic sites to kill cancer lesions far away from the primary tumor. Results were enhanced by the inclusion of a PD-1 blocker, a commonly used cancer immunotherapy, including decreased systemic disease progression. The combination therapy increased median survival by 76% when compared to PD-1 blocker alone.

“We injected our microbubbles in the primary tumor, applied ultrasound, and found that the metastatic tumors – like tumors located in the lungs – were disappearing,” said Dr. Lux, a member of UTSW’s Harold C. Simmons Comprehensive Cancer Center.

Importantly, MUSIC appears to have low toxicity. Microbubbles are regularly used in patients for ultrasound imaging, and the use of a targeted and on-demand delivery system will limit risks of widespread inflammatory responses that are commonly associated with other cGAMP delivery vehicles.

“Ultrasound scanners are more affordable than other imaging modalities and are present in all hospital settings within the United States. Having a relatively inexpensive, image-guided therapeutic available to improve treatment of cancer patients would be exciting,” added Dr. Lux. The same concept behind MUSIC’s microbubble technology could lead to the development of targeted immunotherapy under image guidance as well as the delivery of other immune-stimulating agents, such as mRNA-based vaccines for multiple human diseases.

Read the original article on The University of Texas Southwestern.