Interferons are proteins that constitute an important part of our natural defense systems. These proteins also exhibit a remarkable antiviral activity. The recombinant human interferon α2b (rhIFNα2b) was approved by the U.S. Food and Drug Administration in 1986. It has been used ever since as an antiviral agent for the treatment of hepatitis B and hepatitis C. Despite its widespread applications, however, there remains an issue: the detection of rhIFNα2b is tedious and time-consuming.

Against this backdrop, researchers from China, in a new study published in the Journal of Pharmaceutical Analysis, recently developed a novel method for the fast and efficient detection of rhIFNα2b. To achieve this, they immobilized a novel "nanobody" on a paper strip. The nanobody used was originally derived from Alpaca—a species of the South American camelid mammal. Subsequently, it was generated in the laboratory using recombinant DNA technology—a technique used to "subclone" DNA fragments to obtain high quantities of synthetic proteins. This is usually achieved using bacteria or other prokaryotic cells. A "nanobody" is a functional fragment of a larger antibody. As the immobilized novel nanobody binds rhIFNα2b tightly and with high specificity, it was used for a rapid and fool-proof detection of rhIFNα2b. 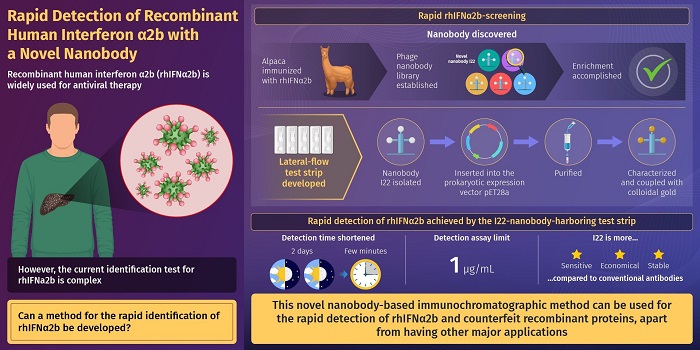 According to Dr. Junzhi Wang, "Owing to the advantages of nanobodies in reagent preservation, production, and cost, the lateral flow immunochromatography assay using nanobodies has a high potential to replace traditional antibody-based ligand-binding assays for a rapid identification test of recombinant protein therapeutics."

"The rhIFNα2b products currently available in China include injections, injection powders, gels, and pastes. The immunochromatography strips can only be used to evaluate liquids or products in powder form that can be dissolved and applied to the strips. This is because the product needs to diffuse along the strip via capillary action; gels and pastes do not satisfy this requirement," explains Dr. Wang.

Quite interestingly, the developed rhIFNa2b detection assay has a detection limit of 1 µg/mL, which is lower than the existing limits. This makes it a more sensitive lab-based technique for rapid identification of rhIFNα2b. Another big advantage is the use of nanobodies for protein detection. This is because nanobodies can be obtained in an economical manner by harvesting inexpensive bacterial cells. Moreover, large volumes of nanobodies can be obtained with relative ease using routinely used laboratory techniques.

Dr. Wang summarizes, "The operation time of rhIFNα2b identification was shortened from two days to a few minutes with our test. It can, therefore, meet the needs for rapid detection of this family of recombinant protein products on the market and provide a good foundation for improving the efficiency of market counterfeit detection. In the future, rapid detection could be carried out in an all-round manner."

In summary, the newly developed method could pave the way for smoother, faster, and accurate detection of recombinant or artificially generated proteins, making for early diagnosis and treatment of hepatitis.