Working with Stanford University, engineers at Michigan State University have invented what they call “NeuroString” — a soft implantable probe that enables researchers to study the chemistry of brain and gut health. They described the probe June 1 in the journal Nature.

“The mainstream way people are trying to understand the brain is to read and record electric signals,” said Jinxing Li, the paper’s first author and an assistant professor in MSU’s College of Engineering. “But chemical signals play just as significant a role in brain communication, and they are also directly related to diseases. My lab at MSU focuses on developing cutting-edge neuroprobes and microrobotics.”

Imbalances in chemicals known as neurotransmitters, such as dopamine and serotonin, are linked to many mental health conditions and neurological diseases, including addiction, depression and Parkinson’s disease.

The team designed this first iteration of NeuroString to measure dopamine and serotonin present in both the brain and the gut’s enteric nervous system that also plays a key role in physical health and mental well-being. Dopamine is best known for its role in the brain’s reward system. Serotonin is the target of antidepressants such as Prozac. Both neurotransmitters are also involved in sleep, movement and digestion.

Existing implants that measure dopamine and serotonin are made of rigid, brittle materials including glass and carbon rods. The implants can not only shatter, but they also chafe against squishy tissue, inflaming cells and degrading the implant.

“We developed a soft probe that can measure the chemical dynamics of soft organs in their natural states,” said Li, who’s also a member of MSU’s Institute for Quantitative Health Science and Engineering, or IQ. “We’re not damaging the biology — or the probe.”

Li started and led much of the work as a postdoctoral researcher at Stanford in the lab of Zhenan Bao, the K.K. Lee Professor of Chemical Engineering. The team received several helpful suggestions for further experiments from outside reviewers while writing up its report. As a result, Li and graduate student Vittorio Mottini continued gathering and analyzing data while they were establishing their new lab at Michigan State during the pandemic. The continued cross-institution efforts ensured the successful completion of the project.

To test the probe, Li worked with scientists from biology, neuroscience, psychiatry, gastroenterology and surgery at Stanford. The work was supported by a Stanford Bio-X seed grant and a Wu Tsai Neuro Institute Big Idea Grant, which encourages interdisciplinary collaborations. “I think supporting mind-opening collaboration across the disciplines is the key for this project’s success,” said Li, who’s now augmenting his network with new collaborators at MSU.

To design the NeuroString probe, Li spent about a year testing different materials. The researchers knew they wanted to use carbon for its electrochemical properties. Carbon can sensitively and selectively detect chemicals of interest while providing attractive electrical properties to connect with sensor circuitry.

But carbon comes in many forms, including graphite, nanotubes and diamond. After extensive screening, the team decided on graphene, which consists of atomically thin sheets of graphite.

“We found that graphene gave us really good selectivity and sensitivity and we could also embed it in a soft rubber matrix,” Li said. “Graphene itself is not very stretchable but if it is entangled as a mesh and embedded in a rubber, then it becomes stretchable.” 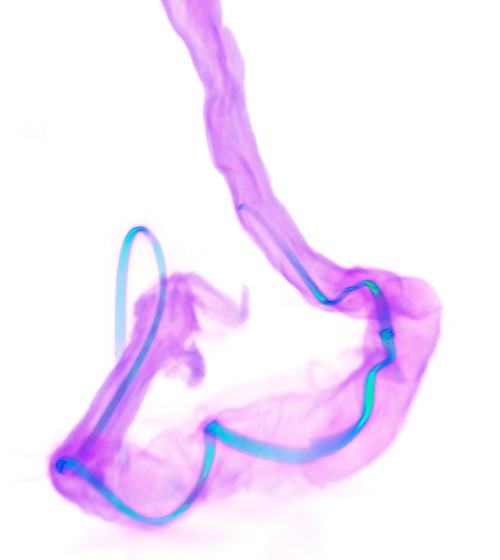 “It’s like a kirigami. If you cut patterns into paper and then you can stretch it, you see some kind of hollow connected paper network,” said Stanford’s Bao. “It’s the same thing here, but the network is made of graphene sheets.

“The sensor is soft and elastic, like a rubber band, which does not cause damage when implanted into the brain or the gut, which is not only soft but also constantly moving,” Bao said.

The team already has improvements in mind for NeuroString before clinical tests in humans: Smaller size and wireless communication. Currently, the sensor’s width is comparable to a human hair. The goal is to have it closer to the size of a cell, or about a 90% reduction in diameter.

As a long-term goal, Li and his colleagues are working toward devices that won’t just monitor brain and gut chemistry, but can also intervene if the probes detect something is amiss. They’re envisioning future NeuroStrings that could, for instance, help get neurons back in synch if something causes the cells to misfire.

“If we’re able to make measurements of molecular concentration and provide stimulation to modulate it with the same device, we could provide truly personalized treatments,” Li said.

In the meantime, though, the team has already demonstrated in preclinical settings and with animal models that NeuroString can be a powerful tool to explore brain and gut chemistry. For his part, Li is thinking about projects that would better explore the biochemistry of Parkinson’s and depression.

“There are a lot more interesting questions we can ask,” he said.