Protein function and activity is determined by both their assembly and secondary structure. Abnormalities related to either protein aggregation or secondary structure can lead to neurodegenerative diseases. In a new study, an international research team reveal how fluoride nanoparticles, materials used in in vivo imaging, affect the assembly and structure of the amyloid β protein. Their results present a step towards better treatment and prevention of neurologic disorders like Alzheimer's disease.

Self-assembly, or the association of individual units of a material into ordered structures or patterns, is a phenomenon of great research interest for materials scientists. One prominent example of self-assembly comes from the self-assembly of proteins in biological systems. The function and activity of proteins are governed by their assembly state. Additionally, the protein's "secondary structure," characterized by its folding into structures, such as a β-sheet, also plays a role. In fact, abnormalities in the protein secondary structures or their assembly can lead to various neurodegenerative diseases, including Alzheimer's disease.

Nanoparticles (NPs) offer a promising route for the treatment and prevention of such diseases by allowing a controlled and targeted drug delivery. Additionally, inorganic NPs, such as fluoride NPs, are used in brain imaging applications. Compared to organic NPs, inorganic NPs are considered a better candidate for developing high functional materials. But, there is much concern regarding their bio-toxicity. While their interactions with bioproteins have been studied, the mechanism underlying these interactions are not well understood.

An international team of scientists from Tokyo University of Science (TUS) in Japan and Nazarbayev University in Kazakhstan has now addressed this issue. In their study, which was made available online on June 2, 2022, and was published in Volume 5, Issue 6 the journal ACS Applied Bio Materials on June 20, 2022, the team investigated a section of the amyloid β peptide (a protein found in the plaques forming in the brains of patients with Alzheimer's disease) in solution with fluoride ceramic (CeF3) NPs. The study was led by Junior Associate Professor Masakazu Umezawa and included contributions from Mr. Naoya Sakaguchi from TUS and Assistant Professors Mehdi Amouei Torkmahalleh and Dhawal Shah from Nazarbayev University.

The team used a technique called "Fourier transform infrared spectroscopy" (FTIR) to directly monitor the effect of the NP surface on the peptide bonds. "We found that, near the nanoparticle surface, peptides are more likely to form β-sheets. This comes as an effect of hydrophobicity. The parts of the peptide that repelled by the water solution stick to the nanoparticles, and form aggregates more easily," explains Dr. Umezawa.

In addition, the team investigated the effect of other surrounding ions in the solution. "What we found was very surprising. Even without the nanoparticles, the environment affected the rate of secondary structure formation," says Dr. Umezawa, "This effect, resulting from a combination of electrostatic interaction and hydrogen bonding, was exaggerated upon adding nanoparticles. With a careful choice of ions and nanoparticles, the β-sheet formation can be either suppressed or promoted. This implies that the process can be controlled and engineered to eradicate adverse effects."

The experimental results were complemented with molecular dynamics simulations performed by the Nazarbayev University team. This, in turn, helped design and guide the experiments as well as provide insights into the results.

With this deeper understanding of the interaction between proteins and NPs, the study paves the way for controlled protein folding processes. With such control, any protein deformations could be eliminated, and positive interactions and structural changes could be promoted. This could lead to a better prevention and treatment protocol for Alzheimer's disease and, eventually, to a better quality of life for aged adults. 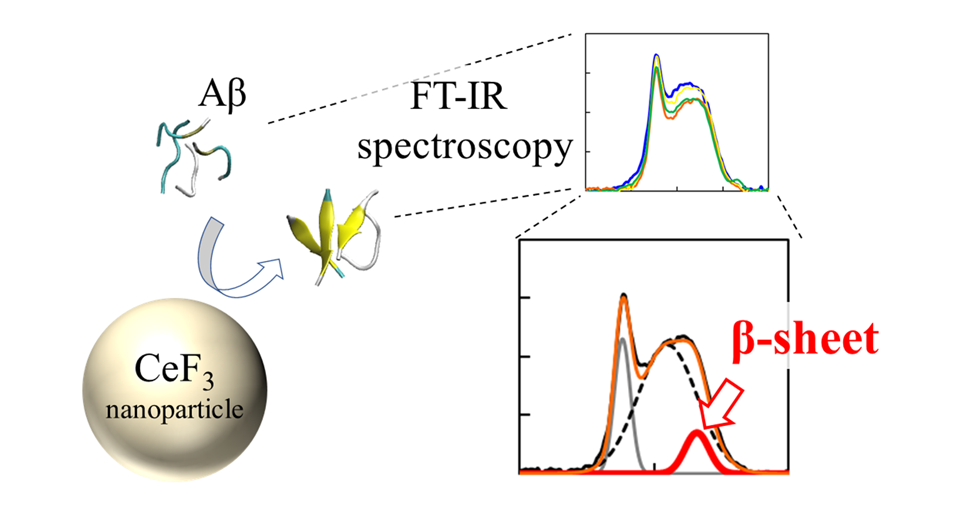 The effect of CeF3 nanoparticles on amyloid beta protein structure is measured directly with FT-IR spectroscopy. The formation of secondary structure shows up as a feature in the IR spectrum.