Each year, over 2,000 women are diagnosed with breast cancer and more than 400 die from the disease (Singapore Cancer Registry annual report 2018). One in 13 women will get breast cancer in their lifetime.

A diagnosis of breast cancer is traumatic and life altering for women and their loved ones. This potentially deadly disease is often treated by surgical removal of the breast cancer tumour followed by chemotherapy. Side effects associated with chemotherapy can be severe and tumour recurrence may result in a shortened lifespan for vulnerable women.

In an encouraging development, researchers from the Yong Loo Lin School of Medicine at the National University of Singapore (NUS Medicine) have succeeded in using a plant-derived nutrient supplement to shrink breast cancer tumours in preclinical models. The team at NUS Medicine used a novel nanotechnology to repurpose a nutritional component in plants to become a potent treatment for breast cancer. 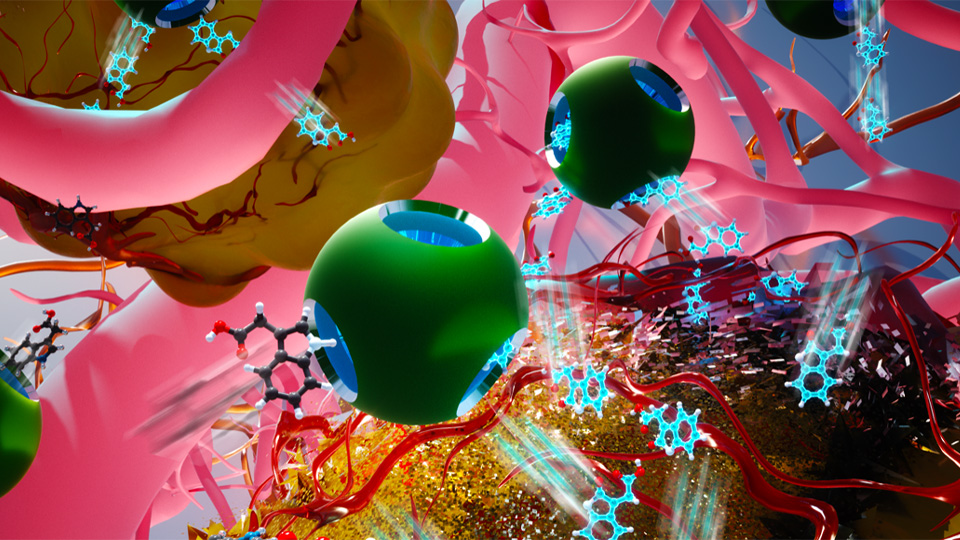 Schematic representation of ‘bioorthogonal catalysis’ where the use of nanotechnology converts the plant-derived molecule into a chemotherapeutic that shrinks breast cancer tumours.

As the nanotechnology converts the plant nutrient into chemotherapy only at the site of the tumour, the treatment is both potent and free from side effects at the same time. Although the study was performed in preclinical models using the new technology, human breast cancer cells were used as the target: these responded with a complete remission. The researchers hope to next apply the technology in clinical trials and for additional solid tumours which are difficult to treat or are difficult to remove via standard surgery.

The use of plant-based natural products transformed by a process called ‘bioorthogonal catalysis’ to shrink breast cancer tumours is ground-breaking technology, said Chester Drum, Assistant Professor at NUS Medicine and Senior Consultant in the Department of Cardiology, National University Heart Centre, Singapore. In essence, a benign nutritional supplement, IAA, was repurposed to become a potent treatment for breast cancer tumours. IAA is present in the everyday diet and thus has no side effects.

“In the new approach, following administration of the plant-derived molecule, an engineered nanotechnology converts the molecule into a potent chemotherapeutic only at the site of cancer, meaning that side effects in the rest of the body can be avoided,” added Assistant Professor Drum. Because the chemical conversion of natural product to chemotherapy is not normally present in the human body, it is called ‘bioorthogonal catalysis’.

Although the study treated breast cancer tumours derived from human patients, preclinical models were used as the experimental cancer host as the technology is still too early to be used in hospital clinics. The researchers plan to next develop a simple gel which can be placed at the site of a tumour removal after a surgery and require the patient to only eat a nutritional supplement to prevent recurrence of the cancer.

The paper, which was published in ACS Nano.