A compact sensor based on graphene can detect single molecules that might one day indicate the presence of disease or infection.

The ability to diagnose infections or diseases by simply breathing on to a smartphone is a vision of scientists at Toyohashi University of Technology in Japan. They have developed a semiconductor sensor that can detect minute traces of biomarkers for infections or diseases such as cancer. Measuring a few millimetres across, these sensor chips could in the future be incorporated in Internet of Things (IoT) biosensors that would enable home-based health testing for supporting telemedicine.

Hundreds of millions of COVID-19 tests have been conducted so far. Meanwhile, the incidence of cancer is growing in nearly every country. Against this background, there is a pressing need for rapid, accurate and convenient biomarker testing that can be performed by compact devices using conventional semiconductor fabrication technology. 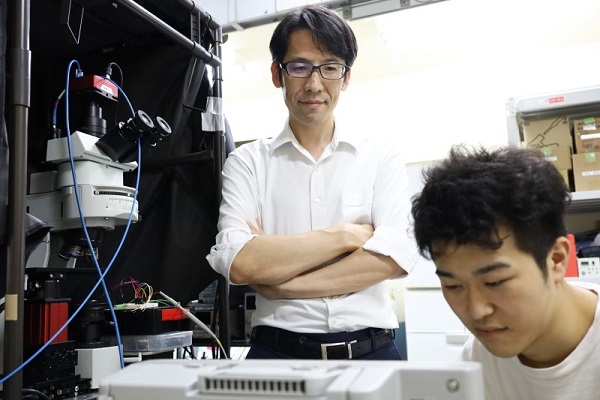 Kazuhiro Takahashi (top centre) and his team are developing a semiconductor sensor that could be use to detect diseases at home.

“Our research target is simple and rapid diagnosis using small amounts of body fluids such as blood, urine and saliva,” explains Kazuhiro Takahashi, a professor in the Electronics-Inspired Interdisciplinary Research Institute at Toyohashi University of Technology, who led development of the sensor. “If biomarkers can be detected, they could eventually be used for cancer screening and predicting the severity of COVID-19.”

The researchers created a prototype test chip using suspended nanosheets such as graphene, a one-atom-thick sheet of carbon atoms. The graphene sheet was stretched like a trampoline in a sealed cavity, so that it can trap individual biomarkers — molecules that can indicate the presence of a condition or disease. When a biomarker adheres to the graphene surface, it causes the surface to deform into a dome-like structure.

When this structure is illuminated by light from an LED, the resulting optical interference generates colour changes that can reveal the presence of biomarkers. While sealed cavities had been used in previous research, Takahashi and colleagues struck upon the original idea of using them for chemical functionalization of the suspended graphene surface.

A suspended graphene sheet (left). When biomarkers adsorb on its surface, it assumes a dome-like shape (right).

Using this technique, the Takahashi and his team succeeded in detecting prostate-specific antigen (PSA), a biomarker widely used to diagnose prostate cancer, in 1 millilitre of solutions. The amount of PSA detected was only 100 attograms. This high sensitivity rivals that of large testing devices found in hospitals, and yet the prototype sensor is compact and portable and delivers results in real time since it does not use labelling agents. The researchers were also able to detect biomarkers for COVID-19.

Takahashi and his team are now further developing the sensor so that it can diagnose disease by screening exhaled breath or gas released through the skin.

“The device could be integrated in a mobile sensor system,” says Takahashi. “It shouldn’t be expensive because the sensor and readout circuit will be a very tiny module. We can reduce the cost by using semiconductor and mass-production technologies.”

Commercialization of the sensor may take two to three years, and the researchers are seeking industrial partners in their quest to realize ultrasensitive biosensors for home use. By advancing the latest tools such as semiconductor and IoT technology, Toyohashi University of Technology is committed to fostering innovations that benefit society.