By using photons and electron spin qubits to control nuclear spins in a two-dimensional material, researchers at Purdue University have opened a new frontier in quantum science and technology, enabling applications like atomic-scale nuclear magnetic resonance spectroscopy, and to read and write quantum information with nuclear spins in 2D materials.

“This is the first work showing optical initialization and coherent control of nuclear spins in 2D materials,” said corresponding author Tongcang Li, a Purdue associate professor of physics and astronomy and electrical and computer engineering, and member of the Purdue Quantum Science and Engineering Institute. 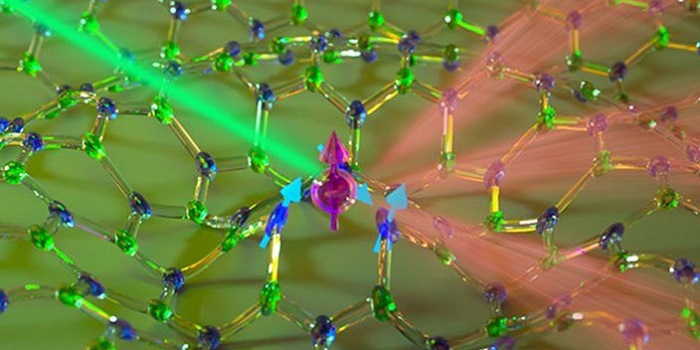 “Now we can use light to initialize nuclear spins and with that control, we can write and read quantum information with nuclear spins in 2D materials. This method can have many different applications in quantum memory, quantum sensing, and quantum simulation.”

Quantum technology depends on the qubit, which is the quantum version of a classical computer bit. It is often built with an atom, subatomic particle, or photon instead of a silicon transistor. In an electron or nuclear spin qubit, the familiar binary “0” or “1” state of a classical computer bit is represented by spin, a property that is loosely analogous to magnetic polarity — meaning the spin is sensitive to an electromagnetic field. To perform any task, the spin must first be controlled and coherent, or durable. 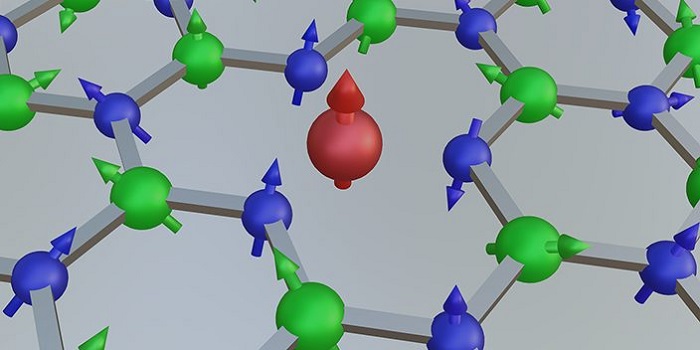 The spin qubit can then be used as a sensor, probing, for example, the structure of a protein, or the temperature of a target with nanoscale resolution. Electrons trapped in the defects of 3D diamond crystals have produced imaging and sensing resolution in the 10-100 nanometer range.

But qubits embedded in single-layer, or 2D materials, can get closer to a target sample, offering even higher resolution and stronger signal. Paving the way to that goal, the first electron spin qubit in hexagonal boron nitride, which can exist in a single layer, was built in 2019 by removing a boron atom from the lattice of atoms and trapping an electron in its place. So-called boron vacancy electron spin qubits also offered a tantalizing path to controlling the nuclear spin of the nitrogen atoms surrounding each electron spin qubit in the lattice.

In this work, Li and his team established an interface between photons and nuclear spins in ultrathin hexagonal boron nitrides.

The nuclear spins can be optically initialized – set to a known spin — via the surrounding electron spin qubits. Once initialized, a radio frequency can be used to change the nuclear spin qubit, essentially “writing” information, or to measure changes in the nuclear spin qubits, or “read” information. Their method harnesses three nitrogen nuclei at a time, with more than 30 times longer coherence times than those of electron qubits at room temperature. And the 2D material can be layered directly onto another material, creating a built-in sensor.

“A 2D nuclear spin lattice will be suitable for large-scale quantum simulation,” Li said. “It can work at higher temperatures than superconducting qubits.”

To control a nuclear spin qubit, researchers began by removing a boron atom from the lattice and replacing it with an electron. The electron now sits in the center of three nitrogen atoms. At this point, each nitrogen nucleus is in a random spin state, which may be -1, 0, or +1.

Next, the electron is pumped to a spin-state of 0 with laser light, which has a negligible effect on the spin of the nitrogen nucleus.

Finally, a hyperfine interaction between the excited electron and the three surrounding nitrogen nuclei forces a change in the spin of the nucleus. When the cycle is repeated multiple times, the spin of the nucleus reaches the +1 state, where it remains regardless of repeated interactions. With all three nuclei set to the +1 state, they can be used as a trio of qubits.