A research team led by Professor Junwoo Son at POSTECH reduces power consumption by half in semiconductor devices by embedding platinum nanoparticles. The new technology extends memory by one million times and is applicable in next-generation low-power devices.

Stepping stones are placed to help travelers to cross streams. As long as there are stepping stones that connect the both sides of the water, one can easily get across with just a few steps. Using the same principal, a research team at POSTECH has developed technology that cuts the power consumption in semiconductor devices in half by placing stepping stones.

A research team led by Professor Junwoo Son and Dr. Minguk Cho (Department of Materials Science and Engineering) at POSTECH has succeeded in maximizing the switching efficiency of oxide semiconductor devices by inserting platinum nanoparticles. The findings from the study were recently published in the international journal Nature Communications.

The oxide material with the metal-insulator phase transition, in which the phase of a material rapidly changes from an insulator to a metal when the threshold voltage is reached, is spotlighted as a key material for fabricating low-power semiconductor devices.

The metal–insulator phase transition occurs when insulator domains, several nanometer (nm, billionth of a meter) units big, are transformed into metal domains. The key was to reduce the magnitude of the voltage applied to the device to increase the switching efficiency of a semiconductor device. 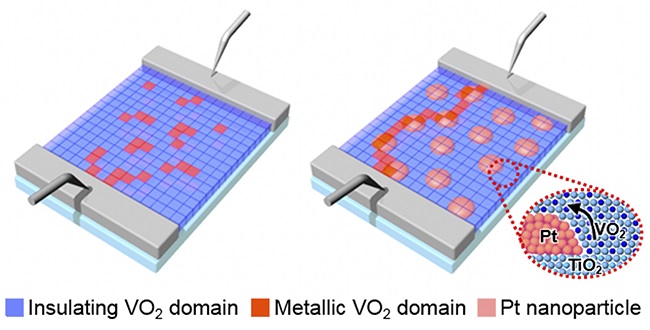 Schematic of the effect of the “stepping-stone” current flow formed via the platinum nanoparticles inserted in the thin phase-transition oxide film.

The research team succeeded in increasing the switching efficiency of the device by using platinum nanoparticles. When voltage was applied to a device, an electric current “skipped” through these particles and a rapid phase transition occurred.

The memory effect of the device also increased by more than a million times. In general, after the voltage is cut off, it immediately changes to the insulator phase where no current flows; this duration was extremely short at 1 millionth of a second. However, it was confirmed that the memory effect of remembering the previous firing of the devices can be increased to several seconds, and the device could be operated again with relatively low voltage owing to the residual metallic domains remaining near the platinum nanoparticles.

This technology is anticipated to be essential for the development of next-generation electronic devices, such as intelligent semiconductors or neuromorphic semiconductor devices that can process vast amounts of data with less power.