What happens when we breathe in nanoparticles emitted by a laser printer, for example? Could these nanoparticles damage the respiratory tract or perhaps even other organs? To answer these questions, Fraunhofer researchers are developing the “NanoCube” exposure device.

The Nanocube’s integrated multi-organ chip set up in the laboratory of the Technical University of Berlin (TU Berlin) and by its spin-off organization “TissUse” detects interaction between nanoparticles and lung cells, the uptake of nanoparticles into the bloodstream and possible effects on the liver.

Having a laser printer right next to your workstation is certainly very practical. That being said, there is the risk that these machines, just like 3D printers, could emit aerosols during operation that contain, among other things, nanoparticles – particles that are between one and one hundred nanometers in size. By comparison, one hair is about 60,000 to 80,000 nanometers thick. Nanoparticles are also produced by passing road vehicles, for example, through the abrasion of tires. As yet, however, little is known about how these particles affect the human body when they are inhaled into the lungs. Until now, the only way to study this would have been by animal testing. What’s more, large sample quantities of the relevant aerosol would have to be collected at great expense. 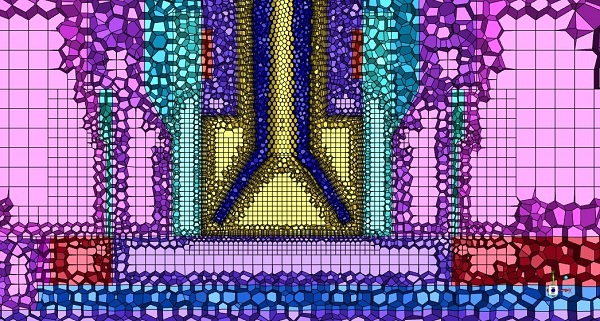 Computational grid for thermal simulation with a magnified representation of the NanoCube exposure device. The aerosol sections are in yellow, the other sections are either components or air sections.

Researchers from the Fraunhofer Institute for Toxicology and Experimental Medicine (ITEM) and the Fraunhofer Institute for Algorithms and Scientific Computing (SCAI) are collaborating with TU Berlin and its spin-off organization TissUse GmbH on the “NanoINHAL” project to investigate the impact of nanoparticles on the human body. The project is funded by the German Federal Ministry of Education and Research (BMBF). “We are able to analyze the biological impact of the aerosols directly and easily using in vitro methods – and without animal testing,” says Dr. Tanja Hansen, Group Manager at Fraunhofer ITEM. 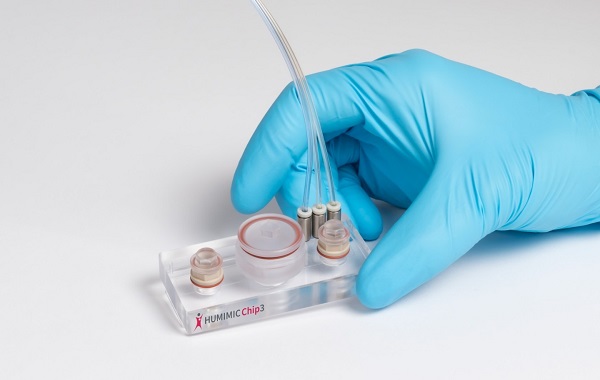 Combining two existing technologies has made this possible: The multi-organ chip Humimic Chip3 from TU Berlin and its spin-off organization TissUse, and the P.R.I.T.® ExpoCube®, developed by Fraunhofer ITEM. The Humimic Chip3 is a chip the size of a standard laboratory slide measuring 76 x 26 mm. Tissue cultures miniaturized 100,000-fold can be placed on it, with nutrient solutions supplied to the tissue cultures by micropumps. In this way, for example, tissue samples of the lung and liver and their interaction with nanoparticles can be artificially recreated.

Four of these multi-organ chips fit into the P.R.I.T.® ExpoCube®. This is an exposure device used to study airborne substances such as aerosols in vitro. Using a sophisticated system of micropumps, heating electronics, aerosol lines and sensors, the ExpoCube® is able to expose the cell samples on the multi-organ chip to various aerosols or even nanoparticles at the air-liquid interface – as in the human lung – in a controllable and reproducible manner.

The nanoparticles flow through a microduct, from which several branches lead downward to conduct the air and nanoparticles to the four multi-organ chips. “If lung cells are to be exposed at the air-liquid interface, numerous parameters come into play, such as temperature, the flow of the culture medium in the chip, and the aerosol flow. This makes experiments of this kind very complicated,” Hansen explains.

The system is currently undergoing further optimization. At the end of the project, the combination of NanoCube and multi-organ chip will facilitate detailed studies of aerosols in vitro. Only then will it be possible to investigate the direct impact of the potentially harmful nanoparticles on the respiratory tract and, at the same time, possible effects on other organs, such as the liver.

But how can aerosols, in particular nanoparticles, be directed towards lung cells in such a way that a specified quantity is deposited on the cell surface? This is where the expertise of Fraunhofer SCAI comes in: The researchers studied this point and similar aspects in a simulation. They had to overcome special challenges in the process: For example, the physical and numerical models required for a detailed simulation of nanoparticles are significantly more complex than for particles with larger diameters. This, in turn, causes a significant increase in computing time.

But the time and effort are worth it, because the computationally intensive simulation helps to optimize the real-life test system. Let’s take an example: As mentioned above, the aerosol has to flow through a line from which several branches extend downward to direct the nanoparticles onto the multi-organ chips, with conditions at the sampling points that are as identical as possible. The inertial forces of the nanoparticles are low, however, so the particles would be less likely to move out of the diverted flow path and onto the cell surface. Gravity alone is not sufficient in this case. The researchers resolve the issue by exploiting the phenomenon of thermophoresis. “This relates to a force in a fluid with a temperature gradient that causes the particles to migrate to the cooler side,” explains Dr. Carsten Brodbeck, Project Manager at Fraunhofer SCAI. “By allowing the aerosol to flow through the line in a heated state, while the cells are cultivated naturally at body temperature, the nanoparticles move towards the cells, which the simulation clearly shows.”

The researchers also used simulations to investigate how to achieve the highest possible temperature gradient without damaging the cells and how the corresponding device should be constructed. They also examined how different flow speeds and supply line geometries would affect uptake. The temperature distribution in the exposure device was optimized by selecting different materials, making adjustments to the
geometry and modifying the cooling and heating design. “Using simulations, we can quickly and easily change the boundary conditions and understand the effects of these changes. We can also see things that would remain hidden in experiments,” explains Brodbeck.

The basic technological problems have been solved. Now, the initial prototype of the NanoCube exposure device, including a multi-organ chip, is expected to be ready in the fall, after which the first experiments with the system will be carried out. For now, the researchers at Fraunhofer are using reference particles instead of aerosols from printers, for example, nanoparticles from zinc oxide or what is known as “carbon black”, i.e. the black pigment in printing ink. In future practical applications, the measuring system is to be set up wherever the nanoparticles are produced, for example, next to a laser printer.

The NanoINHAL project will see the creation of an innovative test system that can be used to investigate the toxic effects of airborne nanoparticles on cells in the respiratory tract and lungs, as well as on downstream organs such as the liver. Due to the combination of two organ systems in a microphysiological system, it will also be possible to study the uptake and distribution of nanoparticles in the organism. In the future, the test system will provide data on the long-term effects of inhaled nanoparticles as well as their biokinetics. This will play a major role in assessing the potential health  hazard posed by such particles.

Read the original article on Fraunhofer.