Imperial startup SPARTA Biodiscovery is offering technology to accelerate the development and production of nanoparticles used in advanced medicines.

Nanoparticles are tiny polymer or lipid capsules around 1,000 times smaller in diameter than a hair. Known in medicine as nanoformulations, they are used to deliver medicines such as cancer drugs and therapeutic genetic information into the body.

Unlike traditional formulations, nanoformulations are engineered to release active agents only where they are needed, for example at tumour sites, preventing harmful side-effects or loss of potency as they move through the body.

Cancer medicine is just one of the fields moving towards nanoformulations, others include small-molecule drugs, gene therapies and vaccines.

Nanoparticle analysis is currently carried out using technologies that typically look at average characteristics of these particles and can take days to return results.

SPARTA Biodiscovery’s new spectroscopy platform, by contrast, is designed to quickly and automatically analyse populations of individual nanoparticles and provide chemical fingerprints to verify each particle’s size, composition and functionality. It achieves this by focusing a laser beam onto each nanoparticle and detecting in detail how the laser light interacts with it. 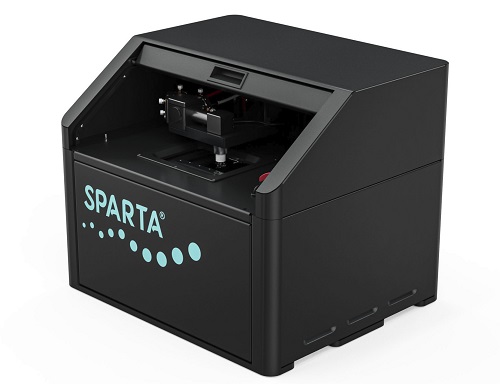 Building on prototypes developed at Imperial, and subsequently validated in published research, the company’s SPARTA platform uses new hardware and proprietary algorithms to perform the required analyses at high throughput and deliver results via an easy to read interface.

The company expects the SPARTA platform to help accelerate the design of nanoparticles before they progress to clinical trials. “One use is for R&D,” says Dr Penders. “It will help scientists to really optimise their designs because they can try one way to package their drug, analyse it with the machine, then tweak some parameters and do it again. It will make R&D cycles a lot more rapid and efficient, and save pharmaceutical developers a lot of money and risk down the line.”

Another use is quality control. “You could measure the particles coming out of the production process and make sure that they're all within the parameters they should be. And the benefit there is that, because SPARTA looks at these particles individually, you have much, much higher resolution to detect abnormalities and contaminations.”

The startup will benefit from continued links with the research group that originated the technology, led by SPARTA co-founder Professor Molly Stevens FRS FREng in the Department of Materials, and from Imperial’s position at the centre of London’s White City Innovation District, an emerging hotspot for research and innovation in biotechnology.

“SPARTA really is such an exciting innovation,” said Professor Stevens. “It has transformed the way that we can analyse nanoparticles across our extensive research portfolio into novel diagnostics and therapeutics. The amount of interest we are seeing from other partners in the field is also testament to the unique proposition that it can offer”.

Dr Alastair Smith, SPARTA Biodiscovery Chair and CEO of the AIM-listed biotechnology company Avacta, said: “As far as we’re aware, SPARTA is the only technology that can deliver chemical information on nanoparticles at this level of detail. This makes it an exciting proposition for customers – who can use it to develop drugs more quickly and at lower risk – and for investors. Ultimately what excites us and gets us going is the prospect of helping bring next-generation drugs to market and the positive impact this will have on patients.”

SPARTA Biodiscovery plans to build and sell its devices and software to pharmaceutical companies, research institutions, and materials companies producing nanoparticles for both medical and non-medical applications. It will also provide nanoformulation-testing as a service for clients that wish to outsource this work and partners interested in co-development.