Researchers have reported the fabrication of enzyme-mimetic nanopockets inside a typical MOF UiO-66, by coordinating zirconium node with terephthalate ligands and various monocarboxylate modulators, including formic acid, acetic acid, and trifluoroacetic acid.

The construction of substrate-specific nanopockets in metal-organic frameworks (MOFs) with allosteric effects has been demonstrated to facilitate the formation of the transition state in catalytic reactions, as enzymes do.

In a study published in Science Advances, a team led by Prof. TANG Zhiyong and Prof. LI Guodong from the National Center for Nanoscience and Technology (NCNST) of the Chinese Academy of Sciences (CAS) reported the fabrication of enzyme-mimetic nanopockets inside a typical MOF UiO-66, by coordinating zirconium node with terephthalate ligands and various monocarboxylate modulators, including formic acid, acetic acid, and trifluoroacetic acid. UiO-66 with tuneable nanopockets showed enhanced activity and selectivity plus great stability in the transfer hydrogenation of biomass derived alkyl levulinates with isopropanol towards value-added gamma-valerolactone (GVL).

“We choose MOFs, or more specifically, UiO-66 as the candidate for research on their enzyme-like behavior in catalysis, with the consideration that, firstly, they have ordered arrangement of active sites and organic ligands with tuneable geometry of cavities, like enzymes, and secondly, the organic ligands coordinated on metal active sites in UiO-66 is really easy to adjust, so we are able to build controllable surrounding nanopockets,” says Prof. LI.

The catalytic activity of UiO-66 with formic acid as the modulator is nearly 30 times that of pristine UiO-66, also outperforming the state-of-the-art heterogeneous catalyst. The modulators coordinating with the zirconium active site in UiO-66 enable change their conform to facilitate forming the rate-determining six-membered-ring intermediate during the reaction process, reducing the transition state energy. And the intermediate would be stabilized by multiple Van der Waals force interactions.

“It is very impressive to find that, the altered catalytic activity of zirconium sites in UiO-66 does not originate from the previously recognized electron-withdrawing or electron-donating effect of the coordinating modulators, but comes from modulators’ conformational change,” says Prof. TANG. “After carefully analysing our experimental and calculation results, we believe the allosteric effect in enzymes happens in the nanopockets of UiO-66 during catalysis.”

The work sheds light on the rational construction of substrate-specific nanopockets in heterogeneous catalysts by judicious selection of versatile organic ligands. 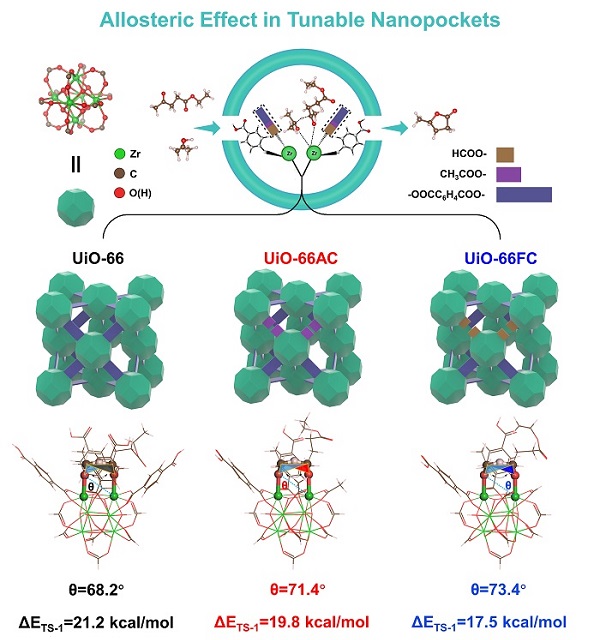