A new technology that incorporates flexible fiber sensors into shoes has been developed by the National Nanotechnology Research Center (UNAM) at Bilkent University and is able to identify a number of health issues, including Parkinson's disease and gait disorders.

Project manager Mustafa Ordu, who specialized in the production and characterization of fiber cables that can generate electricity for wearable devices, explained that the technology developed at UNAM is loaded with smart sensors that can monitor body movements and determine issues and diseases, with the potential to diagnose many health problems.

Further explaining the cutting-edge technology, he said that it can be woven into body wear or incorporated into footwear since by knitting these cables together like a type of threaded fabric, they can be incorporated into clothing as fibers. "This is what makes our team stand out among the existing laboratories in the world; we make smart sensors with flexible fiber and two-dimensional materials," said Ordu. 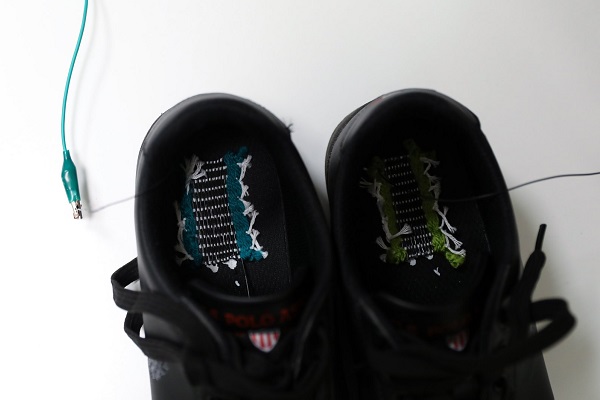 The nanotechnology can help monitor the wearer's heartbeat continuously as well as their body temperature through the sensors, Ordu said, adding that they hope the technology will be widely used in orthopedics. "Flat feet are widespread in many people, and specifically manufactured insoles are not generally utilized because they are too expensive. Hence the research is still ongoing as we are hoping to come up with sensors that can monitor walking behavior, and eventually eliminate gait problems over time by making personalized insoles in partnership with the doctors," he explained.

The development of this fiber optic technology can help in the early diagnosis of neurological diseases such as Parkinson's. The team is also working on integrating the sensors with smartphones in order to detect the differences in the gait of those at risk of disease over time, which will increase doctors' capacity to diagnose patients earlier. In addition, these fibers also have the ability to generate electricity as the fibers placed under the soles of shoes have the potential to charge devices such as phones.

The technology has numerous uses and commands a sizable portion of the global market, with many businesses using applying it in the United States, Europe and Asia. The economic benefits of using these technologies in our country are very considerable, said Ordu, who studied mechanical engineering at Istanbul Technical University (ITU) before going on to study in Japan, France and the U.S before returning to Türkiye to share all he had learned.