A Revolution Still in the Making: NIST Researchers Chart the Future of Nucleic Acid Nanotechnology

Trapped in a microscopic cage made of strands of DNA, molecules of a life-saving drug course through the bloodstream of a cancer patient. Only when receptors on the strands sense they’ve arrived at the right location—cancer cells overproducing a particular protein or exhibiting other abnormal behavior—does the cage pop open, delivering the anti-cancer drug exactly where it’s needed and leaving the patient’s healthy cells unscathed.

That’s an example of how nucleic acid nanotechnology (NAN) on its own—using solely the physical and chemical properties of the nucleic acids DNA and RNA rather than the genetic code they carry—are revolutionizing medicine. 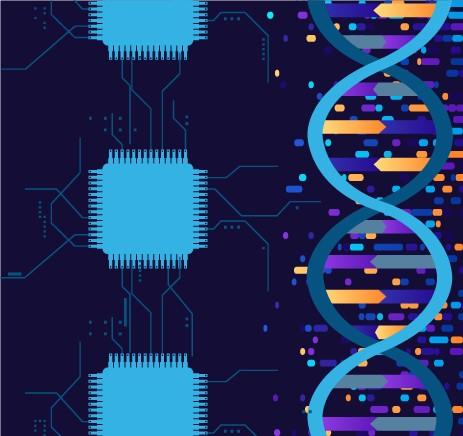 But what if the unique properties of DNA and RNA could be combined with the myriad advantages of semiconductor technology? For instance, researchers are developing an artificial nose by attaching arrays of miniature DNA molecular sensors – each one customized to sense a different molecule – to silicon chips. This bio-electronic sensor will have the capability to “sniff out” thousands of different chemicals in the body or the environment.

In an article published online Oct. 21 in Nanoscale, NIST researchers J. Alexander Liddle and Jacob Majikes reviewed the many facets of NAN and concluded that the technology holds the most promise for bridging the world of biology and semiconductors.

Some researchers and funding agencies, they noted, expected that NAN might supplant many aspects of semiconductor fabrication and could rival existing technologies for uses such as archival memory. Some scientists have suggested that the strands could efficiently self-assemble to build integrated circuits.

However, these endeavors are simply not economically viable, Majikes and Liddle asserted. Advances in the semiconductor industry over the past two decades have enabled rapid and inexpensive fabrication of the circuits without NAN. Although the intriguing possibilities that NAN offers have inspired and attracted researchers worldwide, economics must be considered when predicting the impact of this nanotechnology, the researchers emphasized.

Funding agencies judging the future utility of NAN should also factor in the large percentage of defects—assembly errors--inherent in DNA structures, Majikes and Liddle said. Defectively assembled proteins may make up as 30 percent of those in organisms. In the body, that’s not a problem; defective proteins are recycled and damaged DNA is repaired. But the semiconductor industry cannot tolerate defects at a level larger than one part in a trillion.

The high proportion of defects makes NAN a poor choice for fabricating electronic devices using the standard “bottom up” approach—starting with strands of DNA and building them to make larger, more complex devices--Liddle and Majikes noted. Instead, the most promising applications of NAN will emerge by combining strands of DNA or RNA with existing biological, pharmaceutical, and electronic devices, the NIST researchers predicted.

Integrating NAN and semiconductor technology may produce biosensors that could be monitored and controlled by smartphones, and enable detection of chemicals in the body and the environment with unparalleled sensitivity.

NAN offers these possibilities because strands of DNA readily bind to each other and a host of other molecules in predictable, controllable ways. The versatility of DNA lies in its structure, the famous twisted ladder or double helix. Two long parallel chains of sugar and phosphate molecules form the rails of the ladder, while the rungs consist of pairs of molecules called bases. The arrangement of the bases, of which there are only four, encodes the blueprint for life but the bases can be switched out or replaced to create structures that have different sensitivities to a panoply of chemicals.

The bases and sugars along a DNA strand stay attached to each other because they share one or more pairs of electrons, a partnership known as covalent bonding. By replacing a single base with a chemical anchor, often at one end of a strand, the remaining DNA structure can use covalent bonding to attach to a molecule connected to a particle of gold or a semiconductor device. Indeed, industry has for years manufactured artificial DNA strands, each tailored to attach to a different group of molecules.

Although the double-stranded helix, which is strong and rigid, is the most familiar form of DNA, it also can take the form of single strands, which are floppy and loose. Fitting together like LegosTM, chains of single and double strands can then assume a variety of shapes that move and vibrate. These characteristics enable a DNA-based structure to match with a cancer cell or other target “because we can easily engineer both the shape and flexibility of the structure so that it fits where we want it to on a protein or nanoparticle, or cell, and also keep it from fitting places where we don’t want it to go,” Majikes noted.

“We now see DNA strands as the ‘glue’ that could hold together and integrate many existing biological, pharmaceutical, and electronic devices and capabilities,” Majikes said. “These products will be wildly diverse but will generally make drugs smarter and make electronic sensors more nuanced and molecule specific,” he added. “NAN is essentially a universal connector between almost any nanoscale tools, whether they’re proteins, nanoparticles or electrodes.”