Bacteria love moist surfaces. Once they have settled there, they do not live as solitary organisms but form larger communities that are embedded in a protective film. These biofilms are found on various surfaces, for example at home on light switches, in the bathroom, on toys or keyboards, on shopping carts or ATMs that many people touch with their hands. This can lead to contact infections. The bacteria, such as the pathogenic bacterium Pseudomonas aeruginosa, are often persistent and defy the body's own immune system or chemical biocides. Current research approaches are therefore trying to prevent bacterial colonization of material surfaces or at least to make it more difficult. A team from Johannes Gutenberg University Mainz (JGU) and the German Federal Institute of Hydrology (BfG) in Koblenz has now developed a new approach using ceria nanoparticles.

For bacterial life in communities, it is important that the individual cells "talk" to each other. Communication proceeds nonverbally with the help of signaling molecules that are continuously emitted to the environment, whereby different "languages" and "dialects" can occur depending on the specific bacterium. As bacterial concentration increases so does the concentration of the signaling molecules. This allows bacteria to detect the number of other bacteria in their environment and activate processes that enable the formation of biofilms. 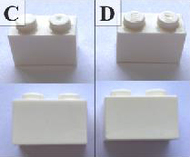 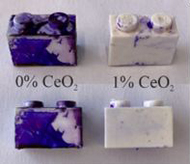 To prevent colonization with bacterial biofilms, various hosts defend themselves with a strategy that " silences" the bacteria by enzymatically modifying the signaling molecules. This is done, for example, with the help of haloperoxidases, a group of enzymes that halogenate signaling molecules through a complex reaction chain.

These modified signaling molecules have a similar structure as the original molecules and can still bind to receptors. However, they can no longer activate the process chains that lead to biofilm formation. This interference in bacterial gene regulation is also of pharmacological interest, because pathogenic bacteria can evade the attack of the immune defense or the effect of antibiotics by forming biofilms.

Ceria nanoparticles take over the function of natural enzymes

The researchers from Mainz and Koblenz mimic these processes with nanoparticles of cerium dioxide (CeO2). CeO2 nanoparticles are, as the researchers explain in their recent article in ACS Nano, a functional substitute for haloperoxidase enzymes. However, the molecular mechanisms underlying biofilm inhibition are difficult to unravel in detail, because not only do many competitive reactions occur in bacterial cultures, but vast numbers of other biomolecules are also present in addition to the halogenated signaling molecules.

The cooperation partners from Mainz and Koblenz demonstrate the enzyme-analog catalytic participation of the CeO2 nanoparticles via an analysis of the reaction cascade at the molecular level. The halogenated signaling molecules were first identified in model reactions. In bacterial cultures, their detection was not possible directly because the products are being degraded too quickly. However, chromatographic workup and mass spectrometric analysis unexpectedly revealed the formation of further halogenated signaling molecules from the family of so-called quinolones. This shows that the CeO2 nanoparticles interfere with biological processes just like native enzymes by modifying and inactivating signaling molecules.

Antibacterial surfaces without the risk of resistance formation made possible

"Cerium dioxide is non-toxic, chemically very stable, and it is contained, for example, in modern vehicle exhaust catalytic converters," stated Dr. Eva Pütz, who carried out her doctoral thesis on this project. She is convinced that cerium dioxide is a viable and cost-effective alternative to conventional biocides. "One practical application of our findings is to block bacterial growth and prevent bacterial infections," she said. The quinolone signaling molecules lead to the formation of small colony variants in the multidrug-resistant bacterium Staphylococcus aureus, which are often diagnostically undetectable. Since the halogenated quinolone signal molecules suppress colony formation, dangerous infections by P. aeruginosa and S. aureus, for example, can be prevented with the help of paint dispersions containing CeO2 nanoparticles," added Dr. Athanasios Gazanis, who investigated the microbiological aspects in his doctoral thesis.

"Here we have an environmentally compatible component for a new generation of antibacterial surfaces that mimic nature's defense system. Most importantly, it works not only in the lab, but also in everyday use," emphasized Nils Keltsch, who performed the biological trace analysis in his doctoral thesis.

The danger in combating biofilms with biocides and antibiotics is the formation of resistance. However, this could be effectively circumvented in an environmentally friendly way by coating polymers with CeO2 nanoparticles.