Wearing face masks has been recognised as one of the most effective ways to prevent the spread of COVID-19, even in its coming endemic phase. Apart from the conventional function of masks, the potential for smart masks to monitor human physiological signals is being increasingly explored. A research team led by the City University of Hong Kong (CityU) recently invented a smart mask, integrating an ultrathin nanocomposite sponge structure-based soundwave sensor, which is capable of detecting respiratory sounds of breathing, coughing and speaking.

Using machine-learning algorithms and a high sensitivity soundwave sensor operable across a wide bandwidth, the smart mask has opened new avenues for its application in the identification of respiratory diseases, as well as a voice interaction tool. This ultra-lightweight wearable technology also has the potential to improve personal and public health by enabling prolonged and systematic respiratory health monitoring in daily life. 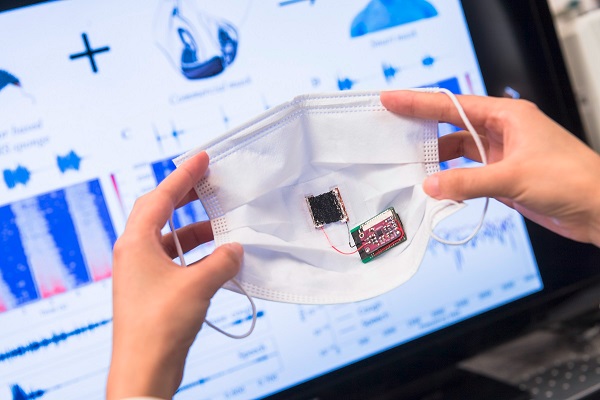 Importance of wearing masks even if COVID-19 becomes endemic

“Many countries now believe that COVID-19 will soon become endemic,” said Professor Li. “However, we must set aside optimism and be realistic about the likely levels of illness, disability and death associated with this disease in the coming years. It is important to remember that endemicity does not correspond to harmlessness.” He used malaria as an example to illustrate that even though it is currently considered endemic in 87 countries, in 2020, it infected an estimated 241 million people and caused 627,000 deaths, according to the World Health Organization. Thus, he suggested that people should continue to be cautious about COVID-19 and use available and proven measures, including masks, to control the spread of the virus.

The smart mask developed by the team has a sponge-like structure as thin as 400μm, fabricated with carbon nanotube and polydimethylsiloxane (CNT/PDMS) materials, using the team’s novel modified sacrificial-release technique. The ultra-thin, lightweight sensor can be practically integrated and work effectively with both rigid masks and deformable non-woven fabric masks. 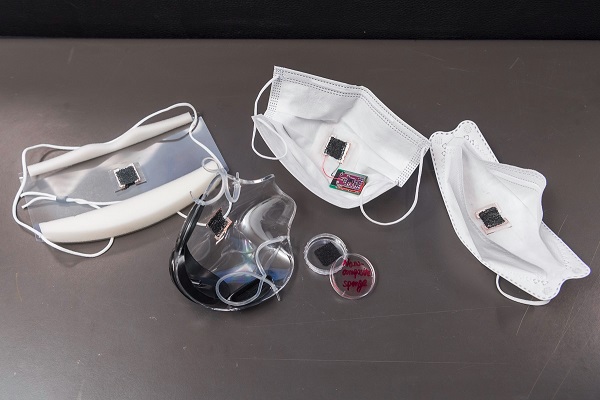 The flexible sensor can be used to detect human respiratory activity by integrating it with commercial masks.

The research team recruited 31 people in order to collect their respiratory activity while they wore the smart mask. The findings showed that the acoustic wave sensor was highly sensitive in measuring both static and dynamic pressure. Besides performing well in the static pressure range of 27.9 Pa – 2.5 kPa, the sensor also responded to high-frequency dynamic pressure generated by the human voice, i.e., sound harmonic acoustic energy up to 4000 Hz.  In addition, the sensor can sense air movement, including directional flow and vibration. These findings suggest that the sensor could be used to detect human respiratory activity by integrating it with a commercial polycarbonate mask. It also demonstrated that the smart mask could detect and differentiate three common respiratory functions: breathing, coughing and speaking.

“Advanced artificial intelligence technology enables the integrated mask to recognise different coughing and breathing patterns automatically, indicating its potential use to diagnose respiratory-related diseases in the future,” said Professor Wang. “Presently, researchers use commercial sensors to detect temperature changes and airflow to count the number of coughs, but they cannot capture important physiological information contained in the human voice, coughing and breathing. Our smart mask is sensitive to both subtle air pressure and high-frequency vibrations and can detect three phrases of coughing,” added Professor Li. 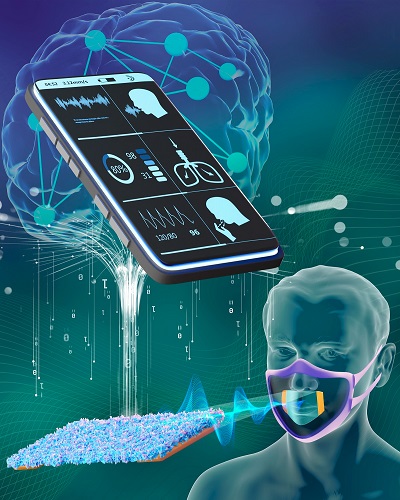 Illustration of the overall concept of the smart mask, which integrates an ultra-thin nanocomposite soundwave sensor to detect various respiratory sounds of breathing, coughing and speaking.