A novel branched lipid that has a high stability in storage and a high efficiency in the delivery of mRNA to cells has been developed.

Messenger RNA (mRNA) are biological molecules that transfer the information coded by genes in the nucleus to the cytoplasm for protein synthesis by ribosomes. mRNA sequences can be designed to encode specific proteins; the most well-known example of this are the mRNA vaccines for COVID-19. mRNA molecules are large and chemically unstable, so a vector must be utilized to deliver mRNA to the cells. One of the most advanced technologies for the delivery of mRNA are lipid nanoparticles (LNPs), which are composed of ionizable lipids, cholesterol, helper lipids and polyethylene glycol.

A team of researchers led by Assistant Professor Yusuke Sato and Professor Hideyoshi Harashima at the Faculty of Pharmaceutical Sciences, Hokkaido University, and by Kazuki Hashiba at the Nitto Denko Corporation have developed a novel branched ionizable lipid which, when included in LNPs, greatly increases the efficiency of mRNA delivery. Their results were published in the journal Small Science. 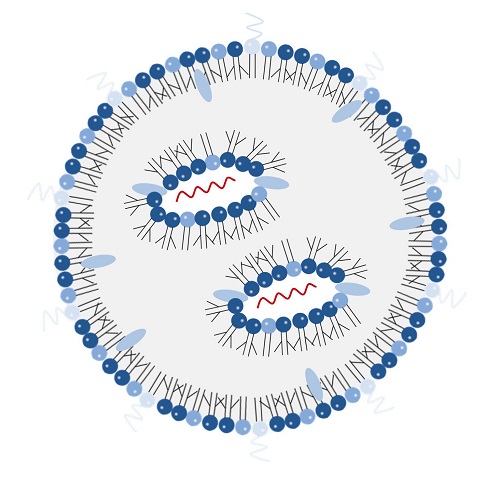 A cross-section of an LNP-RNA. The mRNA (red) is encapsulated by lipids (blue spheres with tails).

The structure of CL4F 8-6, the branched ionizable lipid that was most effective in increasing storage stability and LNP-RNA delivery.

The team discovered that LNP-RNAs which contained highly symmetric branched lipids exhibited greater microviscosity, and the higher microviscosity was positively correlated with increased stability of LNP-RNAs in storage. Highly symmetric branched lipids in LNP-RNAs are also positively correlated with protein expression in the liver and spleen in mice. They determined that the length of the branched chain affects organ selectivity.

The most stable storage and most efficient delivery of the mRNA was achieved by the branching lipid CL4F 8-6. The authors demonstrated that this particular lipid could be used in LNPs designed for gene editing, achieving a 77% suppression of the target gene in mice with just one dose of LNPs.

This study revealed that branched lipids with a high level of symmetry contributed to optimal LNP properties for efficient intracellular delivery and stable formulations. Future work will focus on developing expanded lipid libraries to understand the properties of other branched lipids, and may lead to design of novel lipids.