Metal stents or staples that disintegrate on demand inside the body could eliminate some surgical and endoscopic procedures.

By taking advantage of a phenomenon that leads to fractures in metal, MIT researchers have designed medical devices that could be used inside the body as stents, staples, or drug depots, then safely broken down on demand when they’re no longer needed.

The researchers showed that biomedical devices made from aluminum can be disintegrated by exposing them to a liquid metal known as eutectic gallium-indium (EGaIn). In practice, this might work by painting the liquid onto staples used to hold skin together, for example, or by administering EGaIn microparticles to patients.

Triggering the disintegration of such devices this way could eliminate the need for surgical or endoscopic procedures to remove them, the researchers say.

“It’s a really dramatic phenomenon that can be applied to several settings,” says Giovanni Traverso, the Karl van Tassel Career Development Assistant Professor of Mechanical Engineering at MIT and a gastroenterologist at Brigham and Women’s Hospital. “What this enables, potentially, is the ability to have systems that don’t require an intervention such as an endoscopy or surgical procedure for removal of devices.”

Traverso is the senior author of the study, which appears in Advanced Materials. Vivian Feig, an MIT postdoc, is the lead author of the paper. 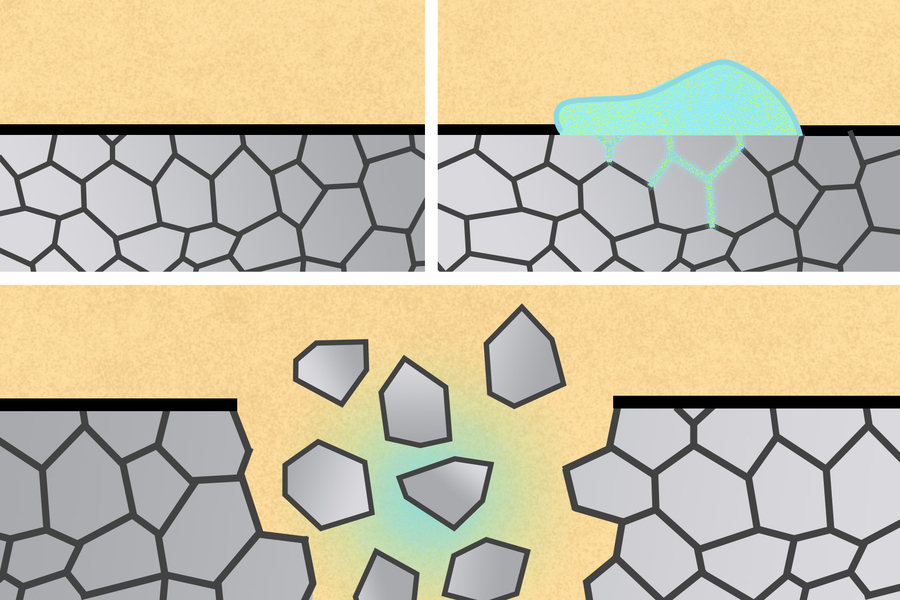 MIT engineers have shown that medical devices made from aluminum can be disintegrated within the body by exposing them to gallium-indium, a liquid metal that seeps into the boundaries between the grains of the metal.

For several years, Traverso’s lab has been working on ingestible devices that could remain in the digestive tract for days or weeks, releasing drugs on a specific schedule.

Most of those devices are made from polymers, but recently the researchers have been exploring the possibility of using metals, which are stronger and more durable. However, one of the challenges of delivering metal devices is finding a way to remove them once they’re no longer needed.

To create devices that could be broken down on demand inside the body, the MIT team drew inspiration from a phenomenon known as liquid metal embrittlement. This process has been well-studied as a source of failure in metal structures, including those made from zinc and stainless steel.

“It’s known that certain combinations of liquid metals can actually get into the grain boundaries of solid metals and cause them to dramatically weaken and fail,” Feig says. “We wanted to see if we could harness that known failure mechanism in a productive way to build these biomedical devices.”

One type of liquid metal that can induce embrittlement is gallium. For this study, the researchers used eutectic gallium-indium, an alloy of gallium that scientists have explored for a variety of applications in biomedicine as well as energy and flexible electronics.

For the devices themselves, the researchers chose to use aluminum, which is known to be susceptible to embrittlement when exposed to gallium.

Gallium weakens solid metals such as aluminum in two ways. First, it can diffuse through the grain boundaries of the metal — border lines between the crystals that make up the metal — causing pieces of the metal to break off. The MIT team showed that they could harness this phenomenon by designing metals with different types of grain structures, allowing the metals to break into small pieces or to fracture at a given point.

Gallium also prevents aluminum from forming a protective oxide layer on its surface, which increases the metal’s exposure to water and enhances its degradation.

The MIT team showed that after they painted gallium-indium onto aluminum devices, the metals would disintegrate within minutes. The researchers also created nanoparticles and microparticles of gallium-indium and showed that these particles, suspended in fluid, could also break down aluminum structures.

While the researchers began this effort as a way to create devices that could be broken down in the gastrointestinal tract, they soon realized that it could also be applied to other biomedical devices such as staples and stents.

To demonstrate GI applications, the researchers designed a star-shaped device, with arms attached to a central elastomer by a hollow aluminum tube. Drugs can be carried in the arms, and the shape of the device helps it be retained in the GI tract for an extended period of time. In a study in animals, the researchers showed that this kind of device could be broken down in the GI tract upon treatment with gallium-indium.

The researchers then created aluminum staples and showed that they could be used to hold tissue together, then dissolved with a coating of gallium-indium.

“Right now, removing the staples can actually induce more tissue damage,” Feig says. “We showed that with our gallium formulation we can just paint it on the staples and get them to disintegrate on-demand instead.”

The researchers also showed that an aluminum stent they designed could be implanted in esophageal tissue, then broken down by gallium-indium.

Currently, esophageal stents are either left in the body permanently or endoscopically removed when no longer needed. Such stents are often made from metals such as nitinol, an alloy of nickel and titanium. The researchers are now working to see if they could create dissolvable devices from nitinol and other metals.

“An exciting thing to explore from a materials science perspective is: Can we take other metals that are more commonly used in the clinic and modify them so that they can become actively triggerable as well?” Feig says.

In this study, the researchers conducted initial toxicity studies in rodents and found that gallium-indium was non-toxic even at high doses. However, more study would be needed to ensure it would be safe to administer to patients, the researchers say.