University of Pittsburgh researchers have designed cancer-fighting nanoparticles that co-deliver a chemotherapy drug and a novel immunotherapy, according to a new Nature Nanotechnology study published today.

The new immunotherapy approach silences a gene that the researchers discovered was involved in immunosuppression. When combined with an existing chemotherapy drug and packaged into tiny nanoparticles, the therapy shrunk tumors in mouse models of colon and pancreatic cancer.

“There are two innovative aspects of our study: the discovery of a new therapeutic target and a new nanocarrier that is very effective in selective delivery of immunotherapy and chemotherapeutic drugs,” said senior author Song Li, M.D., Ph.D., professor of pharmaceutical sciences in the Pitt School of Pharmacy and UPMC Hillman Cancer Center investigator. “I’m excited about this research because it’s highly translational. We don’t know yet whether our approach works in patients, but our findings suggest that there is a lot of potential.”

Chemotherapy is a pillar of cancer treatment, but residual cancer cells can persist and cause tumor relapse. This process involves a lipid called phosphatidylserine (PS), which is usually found inside the tumor cell membrane’s inner layer but migrates to the cell surface in response to chemotherapy drugs. On the surface, PS acts as an immunosuppressant, protecting remaining cancer cells from the immune system.

The Pitt researchers found that treatment with chemotherapy drugs fluorouracil and oxoplatin (FuOXP) led to increased levels of Xkr8, a protein that controls distribution of PS on the cell membrane. This finding suggested that blocking Xkr8 would prevent cancer cells from shunting PS to the cell surface, allowing immune cells to mop up cancer cells that lingered after chemotherapy.

In an independent study that was recently published in Cell Reports, Yi-Nan Gong, Ph.D., assistant professor of immunology at Pitt, also identified Xkr8 as a novel therapeutic target to boost anti-tumor immune response. 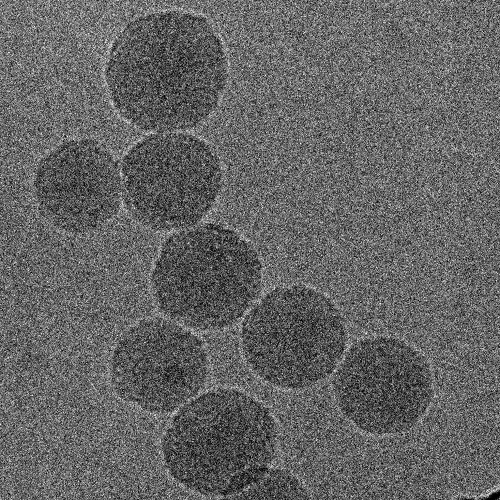 Electron microscopy image of nanoparticles containing the chemotherapy drug FuOXP and novel immunotherapy of siRNA that blocks expression of Xkr8.

Li and his team designed snippets of genetic code called short interference RNA (siRNA), which shuts down production of specific proteins — in this case, Xkr8. After packaging siRNA and FuOXP together into dual-action nanoparticles, the next step was targeting them to tumors.

Nanoparticles are typically too large to cross intact blood vessels in healthy tissue, but they can reach cancer cells because tumors sometimes have poorly developed vessels with holes that allow them passage. But this tumor-targeting approach is limited because many human tumors do not have large enough holes for nanoparticles to pass through.

“Like a ferry carrying people from one side of the river to the other, we wanted to develop a mechanism that allows nanoparticles to cross intact blood vessels without relying on holes,” said Li.

To develop such a ferry, the researchers decorated the surface of the nanoparticles with chondroitin sulfate and PEG. These compounds help the nanoparticles target tumors and avoid healthy tissue by binding to cell receptors common on both tumor blood vessels and tumor cells and prolonging the length of time they remain in the bloodstream.

When injected into mice, about 10% of the nanoparticles made their way to their tumor — a significant improvement over most other nanocarrier platforms. A previous analysis of published research found that, on average, only 0.7% of nanoparticle doses reach their target.

The dual-action nanoparticles dramatically reduced the migration of immunosuppressing PS to the cell surface compared to nanoparticles containing the chemodrug FuOXP alone. 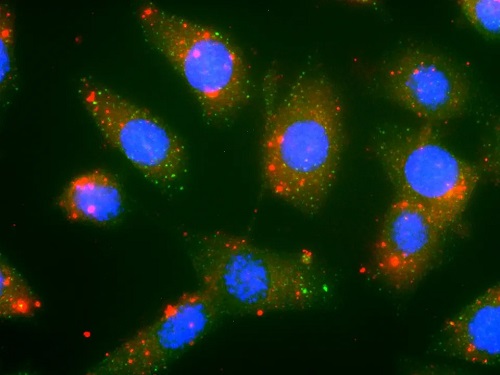 Next, the researchers tested their platform in mouse models of colon and pancreatic cancer. Animals treated with nanoparticles containing both FuOXP and siRNA had better tumor microenvironments with more cancer-fighting T cells and fewer immunosuppressive regulatory T cells than animals that received placebo or FuOXP doses.

As a result, mice that received the siRNA-FuOXP nanoparticles showed a dramatic decrease in tumor size compared to animals that received those carrying just one therapy.

According to Li, the study also pointed to the potential of combining the FuOXP-siRNA nanoparticles with another type of immunotherapy called checkpoint inhibitors. Immune checkpoints such as PD-1 act like brakes on the immune system, but checkpoint inhibitors work to release the brakes and help immune cells to fight cancer.

The researchers found that FuOXP nanoparticles with or without siRNA increased PD-1 expression. But when they added a PD-1 inhibitor drug, the combination therapy had drastic improvements in tumor growth and survival in mice.

With their sights set on translating their novel therapy to the clinic, the team is now looking to validate their findings with additional experiments and further evaluate potential side effects.

Read the original article on UPMC.